You are here: Home / Boat Work / Designing Boat Systems that Everyone Can Use 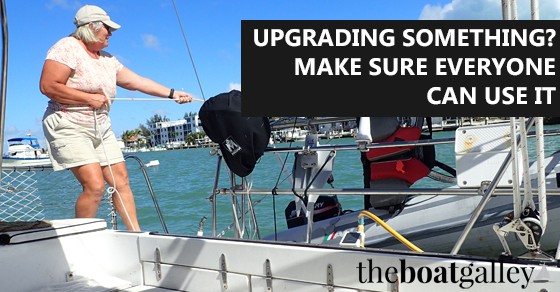 Most cruising couples and families end up with each person usually doing the same jobs on the boat.

I don’t want to call them pink and blue jobs because (a) I hate stereotyping jobs and (b) it often has nothing to do with gender, just who prefers to do what. Dave makes the bed 95% of the time. I do 95% of the electrical work. Not stereotypical, but still a division of labor.

Some jobs, however, do tend to be “assigned” by strength or other physical characteristics. Dave is stronger than I am and — perhaps more importantly — taller. He simply has better leverage or the necessary reach for certain tasks.

When we began cruising almost fifteen years ago, we made a conscious decision that we wanted every single system on the boat to be usable by both of us. I say that we made the decision, but it was Dave’s background in heavy industry that made him suggest it. In his words:

Systems have to be designed to be used by anyone.

No, it didn’t happen immediately. But as we made upgrades and improvements, it was a basic principle that we made sure to follow.

On our current boat, we’ve done the same:

Along with physically making sure we can both do everything on the boat, we also add little notes or cheat sheets: “fill to here” or “do this first.” On the dinghy davits and outboard crane, the lines are marked for the “all the way up” and “release to here to hook up” positions.

When we started cruising, we envisioned that some day one of us could be injured or ill and the other one need to essentially single-hand the boat. We all think about the horrific possibilities: heart attack, stroke, MOB. The reality is that even something like a broken finger can make certain tasks impossible to do.

This week, our prep paid off.  Dave had surgery to hopefully cure the chronic prostate infection he’s been fighting for over a year. It was an outpatient procedure but until things heal a bit, he is forbidden to do much of anything other than sit or lie down. No starting the outboard. No starting the generator. No hoisting the dinghy. No filling the water tanks. No climbing out of the cockpit, even to hang up a towel. But all those things still need to be done (we’re on a mooring ball in Marathon, Florida).

And while I may not do “his” jobs as quickly and easily as Dave does, the fact is that I can do them. It bugs Dave that he can’t do what he normally does; he hates feeling useless. But I explain to him that he’s not useless — he’s the one who made sure I could do these things!

2.4K Shares
Some links above (including all Amazon links) are affiliate links, meaning that I earn from qualifying purchases. Learn more.