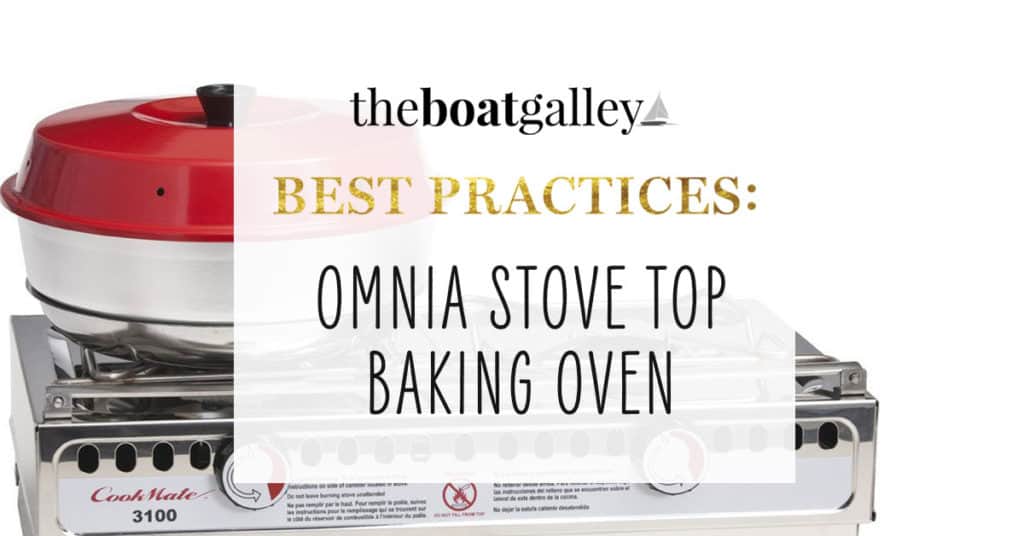 No oven?  But still want baked goods — cookies, cakes, bread and more?  You can bake it on the stove top with the Omnia Stove Top Oven.  I’ve tried a number of methods of baking on the stove — in a Dutch oven, with a pressure cooker (both dry and with water) and in a Coleman Camp Oven — and the Omnia is hands-down the easiest and produces the best results.

When a reader recommended the Omnia oven, I decided to buy one and test it out. I love it! I also discovered that Practical Sailor had done a very brief review on the Omnia oven in August 2010 and concluded that it was a good option for boats without a conventional oven.  I totally agree.

How Does the Omnia Work?

There are three pieces to the Omnia oven:  a steel base, an aluminum ring-shaped baking pan and the lid. The picture at right shows how it works.

The burner directly heats the steel base, which in turn heats the air trapped between the base and the baking pan.  The burner also heats air that goes up the center of the baking pan and the lid serves to distribute that hot air over the top of the food.

Thus, there’s hot air both under and above the baking pan — and in the center.  A few air holes in the lid allow steam to escape.

It can be used with virtually any type of stove burner — gas, electric or even various other fuels used with camping and backpacking stoves. And it can be used on a grill — making it easier to keep the cooking heat out of the boat. It cannot, however, be used on an induction stove.

The system is simple:  you place the steel base on the burner and let it heat for about 3 minutes on high.  Put your food into the baking pan and put the lid on it, then set it onto the base.

The instructions say to then turn the burner down to medium or lower.  I found that I had better results if I left it on high just about a minute (to heat the air on top of the food) and then turned it down to slightly higher than medium.

Cooking time is then about the same as with a conventional oven, but don’t take the lid off too often to check, as you let out the hot air from the top each time.

Yes, it’s a little strange to bake without a thermostat to know that it’s at the right temperature, and it will take a little experimentation to know the best settings on your stove.

I’ve never recommended “baking” in a pressure cooker, as it is very likely to warp the pan if you use it dry, and using water in it means that your food is steamed instead of baked (fine if it’s supposed to be steamed, not so good otherwise).

A Dutch oven won’t bake as much as the Omnia, it’s hard to keep foods from burning on the bottom and the top tends to be steamed from the moisture driven out of the food (which has no way to escape).

The Coleman Camp Oven is huge and very tippy on a boat unless you engineer some serious tie-downs for it.

After several weeks of testing the Omnia with a variety of dishes, my conclusion is that it’s the best way to bake on the stove top that I’ve ever tried.  If your boat (or RV or any other kitchen) doesn’t have a true oven, I highly recommend the Omnia oven:

When I baked using the Dutch oven, it was hard to keep the top of the baked food from being steamed by the moisture being driven out of the food (read my article on baking in the Dutch oven).  The Omnia takes care of that, with the lid being high enough over the food to have quite a bit of hot air there, as well as having holes to let the steam escape.  My bread and baked goods were very similar in texture to what they were in a conventional oven.

The Omnia isn’t cheap, but it’s not expensive either — about $70 —  a lot less than a new stove with an oven (bonus: nothing to install!).

Who is more relevant for cruising information–the old-time cruisers or today’s YouTube stars? And does it matter? [More] Standing on the Shoulders of Giants