You are here: Home / Buying a Boat & Gear / Choosing and Installing a Victron Battery Monitor 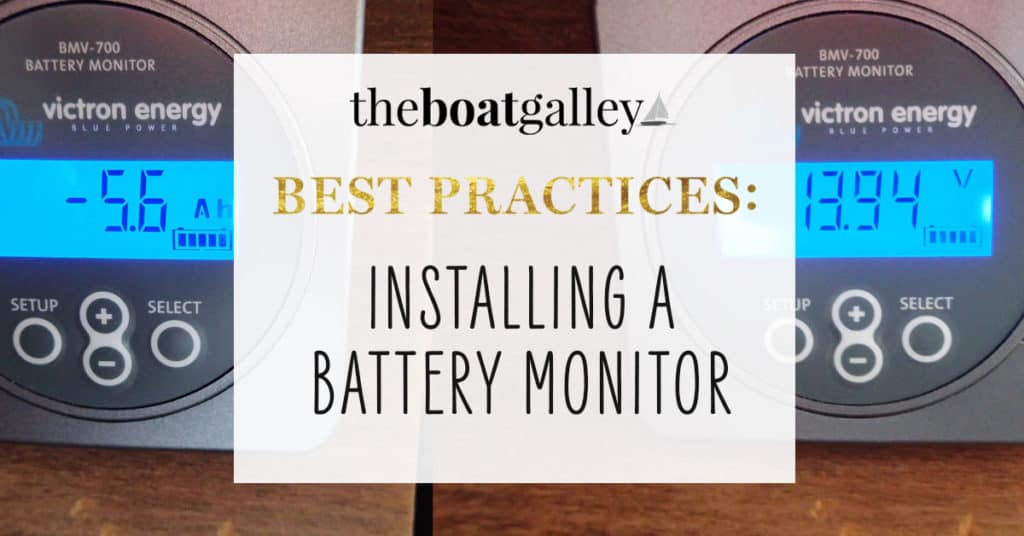 Why You Need a Battery Monitor on a Boat

How do you know if your batteries are getting charged enough? If there’s enough power to watch a movie? If your solar panels or wind generator are sufficient? Do you need to run the generator?

All important questions on a cruising boat. And ones we couldn’t answer because Barefoot Gal only had a voltmeter that displayed the battery voltage. Voltage isn’t a great way to determine state of charge in the first place, but for it to come close at all, the batteries have to be “at rest” for at least 15 minutes. We’re almost always either (or both) putting power into the batteries from the solar panels, or using at least a bit of power.

We needed a battery monitor. A battery monitor shows the net amps in and out of a battery bank and the net amp-hours used since the battery was last fully charged. Most also show things like voltage and percentage of full charge, maybe battery temperature and some other things. At least for Dave and I, the important numbers are the amps in and out and amp-hours down.

We never want to use more than half our battery capacity — using more will significantly shorten the life of the batteries. In fact, some experts say not to use more than 20% or 25% before recharging. Thus, knowing both our total capacity in amp hours, and knowing how many we’re “down” at any time lets us know how we’re doing against this standard.

The amps in/out are also important for knowing how we’re doing at any time during the day and it’s a big help in determining which items aboard are energy hogs. Plug something in (or turn it on) and see how the amp flow changes.

Battery monitors can monitor a single bank or a single bank plus show the voltage on a second bank (say a starting battery). And relays can be wired in to do things like start a generator if the state of charge gets to a specified point. Some, such as the Link 2000 that we had on our previous boat Que Tal, also control the shore charger and inverter. We didn’t need to do all that — we have one battery bank (we start the engine with the house bank since the engine is small), our generator is a portable Honda and our shore charger and inverter are stand-alones.

Adding a single bank or two-bank monitor is something that most boaters can do for themselves. Things like wiring in relays for generators and charger/inverters takes more advanced skills or hiring a professional. Since ours would be simple, we were going to do it ourselves.

A number of companies make battery monitors suitable for boats — Xantrex (formerly Link) is perhaps the best known, but Blue Seas also makes them as does Victron. We went with the Victron as it costs the least, is the simplest to install and gets great reviews.

A couple of notes about the Victron (the other monitors may have similar features) — it will work with any type of batteries (wet cell, AGM, gel or even Li-ion) and the shunt is 500 amps which is sufficient for most starters, windlasses and other large loads. I am not saying that the other brands are bad monitors, simply that Victron was our choice for a simple installation.

Since we only had one battery bank, we used the Victron 700. The model 702 is for two battery banks. Both are available on Amazon (click here).  The same quick installation guide and owners manual apply to both.

Before we could add the monitor, however, we had to clean up the wiring done by previous owners. Barefoot Gal had a number of “idiosyncracies” such as one battery wired directly to the positive bus bar instead of the switch (so power was always on to everything on the bus bar). All of our electric devices worked, but we knew wasn’t right. So we started by spending a couple of days tracing and then cleaning up the positive side of things.

NOTE: All of this clean-up work is necessary no matter what brand of monitor you use — and most boats will have a few wires that have to be moved for the monitor to work properly.

Now we were finally ready to install the Victron battery monitor. It took us two half days to do the installation, but a good part of that was creating a place to mount the monitor (and neither one of us is a skilled carpenter so projects such as this always take us longer than they should).

Where you mount the display is totally up to you, although you want it in a place that is convenient to check. The Victron comes with a 33-foot cable, so it can be placed at quite a distance from the batteries.

With the Victron battery monitor, the display is connected to the shunt by what looks like a phone cord (even the same type of snap-in plugs). This makes it really easy to run the wires and impossible to connect them incorrectly.

After installing the display unit and running the wire to it, the next step was to mount the shunt and run the wires to it. We took the large negative cable that used to go from the battery to the bus bar and moved it to run from the shunt to the bus bar.

The shunt has large posts on it — 3/8″ — so we had to put a new end on the cable. West Marine to the rescue — most stores have a workbench with wire cutters, strippers and crimpers that you can use on large wire (note: with 4 AWG wire, it took Dave’s strength to cut the wire and crimp the new end — I simply was not strong enough to do it myself). We also bought and put the ends on a short jumper from the battery to the shunt (this should be the same size wire as you use to connect your batteries together and to connect the shunt to the bus bar).

Connect Power to the Shunt

The last step was to hook up the positive wire to the shunt and in turn to provide power for the monitor. The Victron battery monitor comes with a large ring terminal on one end or the power wire and a straight crimp that looks almost the end of a shoelace on the other, with a fuse in between. It’s best to take the fuse out while making the connections.

The straight end goes in a crimp connector on the shunt. To open it, press a spade (straight) screwdriver tip in the middle of the orange thingy (there’s a depression it’ll fit in), then slide the orange piece towards the shunt. That will open the hole. Stick the shoelace end in the hole — almost all the crimped end will go into the hole — then release the screwdriver. (How this connection worked was the only part that I found non-intuitive . . . and of course the installation guide didn’t explain it, either.)

You can put the ring end either directly on a positive battery post or on the positive bus bar (if you put it on the bus bar, you may need to replace the large ring with a smaller one). If you put it on a battery, you can turn the monitor off by removing the fuse, but otherwise it’ll always be on. This was our choice.

Once you make all the connections between the batteries, shunt and Victron battery monitor, it’s time to reinstall the fuse. When you do, the display will turn on and you’ll be prompted to enter the amp-hour capacity of the battery bank (if you are monitoring two banks, the bank you have connected to the shunt).

At the same time, you can change the defaults for certain charge parameters and define how the monitor determines that the batteries are “fully charged.” You may want to change the defaults to better reflect your batteries and charging patterns, but if you don’t understand what the variables are, you can use the defaults and they’ll do a pretty good job (you can read Nigel Calder to learn more about this — I’m certainly not an expert and while I did change some of the parameters for our set up, I don’t know enough to tell others what to do).

One parameter that probably everyone should change is the “charge efficiency” — this reflects the amount of power lost due to voltage drops and other inefficiencies in the charging circuit. The default is 95%. From everything I read, 95% is pretty optimistic for real world conditions and will lead you to believe that your batteries are down less than they really are (it has no effect on their actual state of charge, just on what the monitor reports). We use 85% — I’d rather err on the side of thinking our batteries are down more than they really are.

The end result of installing the Victron battery monitor? We’re running the generator a lot less. We discovered that with our switch to LED lights and using solar lights in the cockpit (our refrigerator is propane), our solar panels are doing a better job of keeping up than we had guessed at. And that’s exactly why we wanted a monitor — to know our usage instead of guess.

Again, here are the links to buy the Victron battery monitors:

Planning a 12V project? Know that you are using the correct size wire for your 12-volt projects with our 6-page quick reference, designed to be kept with your wiring tools so it’s fast to check. See it in our store.

462 Shares
Some links above (including all Amazon links) are affiliate links, meaning that I earn from qualifying purchases. Learn more.