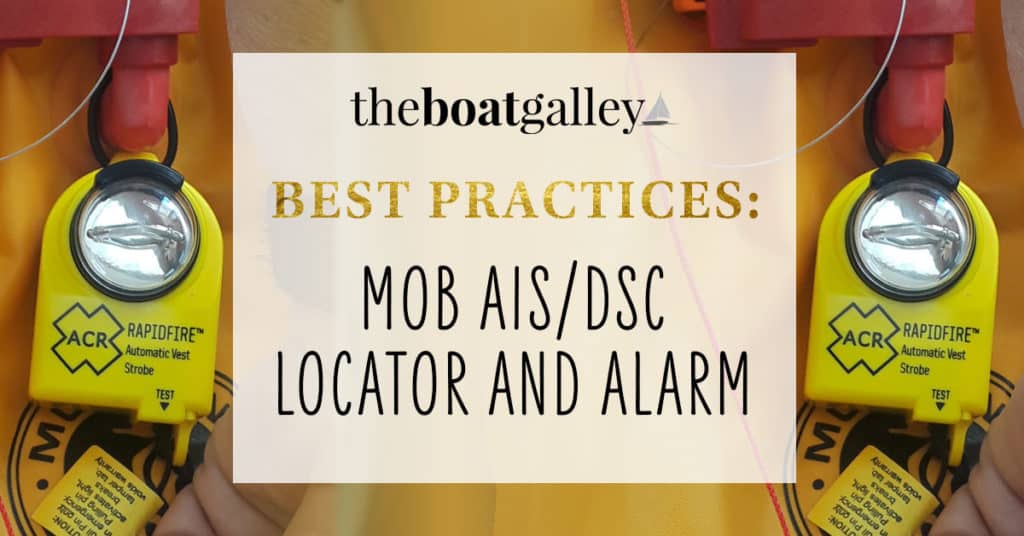 A MOB situation is one of the scariest things that can happen on a boat. There have always been two big issues in recovering a MOB: finding them and then getting them on board.

Finding someone who has gone in the water is a nightmare if you’re relying on eyesight alone. If you’ve ever cruised in an area with crab or lobster pot buoys or fishing net markers, you know how hard it is to see them in the water — and they’re about the same size as a person’s head.

Add in that on a typical two-person cruising boat, the person on the boat is not only trying to spot the person in the water but is also operating the boat (and maybe trying to take sails down), and you can see the problems. And what if the off-watch person was sleeping or preparing a meal when the on-watch person went overboard and didn’t even realize it? That makes it even tougher.

Technology is helping considerably with “finding the MOB.” There are basically two approaches to this: sending a signal to search & rescue authorities with a PLB (personal locator beacon) or notifying boats in the area (including the one the MOB had been on).

Both strategies have their applications but I think that for coastal cruising, particularly where there are other boats in the area and especially if there is more than one person on board, a signal to the mother ship and nearby boats gives the best chance for quickly finding the MOB. This is especially true if that signal includes a GPS fix of where the MOB now is and can sound an alarm that will wake up any sleeping off-watch crew members.

Such technology is now available, with a AIS/DSC locator. This combines an AIS signal showing the location of the MOB, along with a DSC (VHF) alarm that sounds on the mother ship.

I absolutely never want to have a MOB situation on our boat and we always tether when on deck and follow basic safety precautions such as not going on deck at night without the other person in the cockpit. Still, I think that having an MOB locator is extremely important for all boaters, but especially those sailing with just one or two others on board.

At the Miami Boat Show, I got the SeaAngel AIS Flare Eco with DSC from Aquaventures. This is an AIS/DSC locator. Normally, I use something for 3 to 6 months before I write an article about it. But that’s hard to do with something that I hope to never actually use. And I can’t legally test how it would work in a simulated MOB situation (that would be the equivalent of filing a false report).

Here’s what alarm looks like on an AIS-enabled chartplotter (at the show, the device was on land and activated on a specially-enabled frequency for demonstration purposes so that it didn’t appear to nearby boats):

When active, the device shows as “SART,” indicating its Search & Rescue. At the same time, a DSC alarm is sent to the mother ship (programmed with the same MMSI) which will alert any other crew on board that someone has gone overboard. It’s plenty loud to wake up the off watch!

The AIS and DSC signals will transmit about 5 to 10 miles, depending on wave height. Since the alarm goes out immediately, the mother ship should easily be in range.

I think that this type of device considerably improves the odds of finding a MOB. The combination of immediately knowing that someone has gone overboard, knowing their location, and enlisting the help of other boats in the area via AIS is a tremendous step forward. Further, since other crew on the mother ship are alerted immediately, they can issue a MAYDAY on VHF 16 to alert other boats in the area and enlist their aid. The faster that someone can be found, the better the odds of rescuing them.

Features of the AIS Flare Eco to Help Find an MOB

I spent quite a bit of time talking to Richard Kniffin, the president of Aquaventures, and also the reps in the booth from the manufacturer.

The AIS Flare Eco is also affordable, with Aquaventures selling it at $199 (list price $239). Ideally, there would be one per person on the boat, but budget-minded cruisers can opt for one unit and install it on a “watchstander’s PFD” that is passed from one person to the next as they take over the watch.

Out of all the MOB devices I saw at the show, and ones I’d seen online, I liked this the best as far as combination of features and price. It really stood out and I think is a significant upgrade to our safety gear on Barefoot Gal. However, as with our life raft and ditch bag, I hope to never report on how well it actually works.

Installing the AIS Flare Eco on an Inflatable PFD

The big issue with any MOB locator is that the MOB has to be wearing the device when they go overboard. Virtually all MOB locator devices are designed to be attached to a PFD, and this is just one more reason that everyone should wear a PFD whenever on deck.

While the AIS Flare Eco is a great product, the directions for installing it on an inflatable PFD are not completely clear. Basically, it’s just like putting an automatically activated strobe light on a PFD, which I covered in Setting Up a New PFD. How to open up an inflatable PFD and install a device so that it automatically activates when the life jacket is inflated is covered there and I won’t repeat it here.

To install the AIS Flare Eco, you must first remove the red protective bracket from the unit and replace it with the clear one. The red bracket will prevent the pin from being pulled by the PFD inflating, while the clear one won’t — but the clear one will still prevent an accidental activation by bumping the “on” button.

Now you can repack the life jackets.

There are at least two other options for a MOB locator and I want to give a quick pro/con on them, although I think for most of us the AIS/DSC device is best:

PLBs are best in situations where you need to contact outside assistance. For example, if you are a single-hander and/or are cruising areas with few other boats. But since it takes time for the signal to reach the S&R authorities, and then for them to start a search and reach location, it may not be the fastest way to get help. If you could be rescued by your own boat or a nearby one, an AIS/DSC device such as the AIS Flare Eco will summon help faster.

A year ago, I had purchased Weems & Plath’s . It uses a Bluetooth connection to a phone or tablet and sounds an alarm if that connection is lost — in other words, when the person wearing the device has moved out of range. The app then helps you navigate back to the location where the person went overboard. The CrewWatcher’s one problem is that it directs you to where the person was lost but says nothing about where they are now (the assumption being that the alarm is sounded quickly enough that they have not moved too far from that location). The advantages were its affordability ($90), the fact that the MOB did not have to remember how to activate the device and there was no need for an AIS receiver or even a VHF on the mother ship. And those are all still true.

The CrewWatcher is certainly better than no MOB locator, although I think the AIS/DSC devices are even better. One great use for the CrewWatcher is if you tow your dinghy (not recommended but I know many people who do) — attach it to your dinghy and it’ll sound an alarm if the dinghy breaks free. The CrewWatcher is perfect for this since it operates by distance, not by water activation or a PFD inflating.

641 Shares
Some links above (including all Amazon links) are affiliate links, meaning that I earn from qualifying purchases. Learn more.