You are here: Home / Living on a Boat / Marine Digest-It 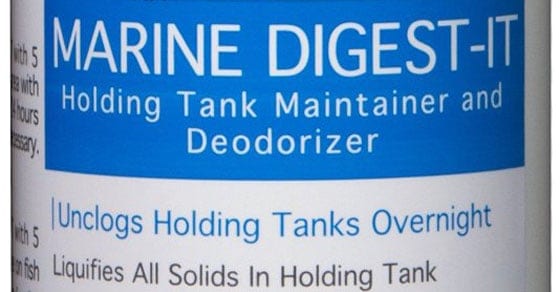 Ever had a clogged head?  Or a holding tank that couldn’t get completely pumped out?

Want to be able to use regular toilet paper instead of that super-thin stuff that’s marketed for holding tanks?  (There’s another way to achieve this, too — read here.)

Or have the situation that a friend of a friend did — got a new-to-you boat and discovered that the holding tank was basically full of, uh, dried out “stuff”?

Several weeks ago, I wrote about Super Digest-It for clearing clogged drains.  And a little while later, I got an email from the manufacturer’s “brand ambassador” (what a great job!) wanting to send me some of their other products to try out.  Well, heck, sure I’ll try stuff (note: my opinions aren’t swayed by the fact that I got it free).

One of the items that Aly from Unique Natural Products sent me was Marine Digest-It.  Its number-one purpose is to liquefy everything in a holding tank and deodorize it, too (it works whether you flush with fresh or salt water), making pump outs much easier.  An added bonus, I later learned, is that it will clear clogs in the head discharge hose with “no muss, no fuss.”

Three advantages from this:  you can use regular toilet paper and put it down the toilet (I hate that super-thin “holding tank” stuff and it can be impossible to find in some places), you completely empty the holding tank making it possible to go longer between pump-outs, and you’ll have fewer funky smells.

Now, the good thing is that unlike most other “holding tank” products, it doesn’t use harsh chemicals.  As with all their products, it uses helpful bacteria to take care of the problem.  The company is emphatic that their products are not bad for the environment yet work well.

Okay, so my problem was that I didn’t have a holding tank problem (wait, that’s a good thing, right?).  But through friends of friends, pretty soon I found someone who did (he asked that his name not be used).  And it was nasty.

He had purchased an older boat that had sat on the hard for a number of years.  And the holding tank hadn’t been emptied before it was stored. (Yuck, but not all that uncommon.)

Checking things out, he discovered that it was about half full with “material” that had dried out over the years.  He planned to remove and replace the tank, figuring that there was no way to remove the dried out stuff from the tank. Filling the tank with water and letting it sit hadn’t done much so far.

I asked if he’d be willing to try the Marine Digest-It as a test case.  His reply was something along the lines of “Well, I know that as it stands, I have to replace the tank.  I don’t see how it can make the situation worse, so sure.”

I got a report back: it’s working.  The tank isn’t totally empty yet, but quite a bit of progress has been made in just one week (they can only get it pumped once a week).  (UPDATE: After the second week, it’s clean).

If the Marine Digest-It is working in this situation, I have to think it’ll be good for regular use.

The company recommends adding some after every pump out.  They say that it is also good for cleaning the bilge and any areas with fish blood.

I also asked Aly how it would work for a clogged hose.  That is, the discharge hose from the toilet to the holding tank (or overboard when offshore). I know that many boats have problems with this and having to remove the hoses to clear the clog is just plain nasty (I won’t go into details).  She said it’s great in this situation:

What we recommend is pour 8 ounces (1 cup) of product down your toilet, followed by 3 cups of warm water.  Make sure the water is warm and not hot. Then just let it sit in your toilet for 30 minutes and after the time is up go ahead and flush.

During the 30 minutes the bacteria is growing and reproducing, so by the time you flush the bacteria will have had enough time to multiply so that they can coat your drains. In that way it should eat away whatever is clogging your pipe and will continue to keep it clean.

She added that if your sink or shower have common hoses with the toilet (unusual but some do), you can mix up another 8 ounces (1 cup) of Marine Digest-It with 3 cups of warm water and put it down the second drain to work two sides at once as clogs often happen where two hoses are joined.I’m thinking that this is pretty good stuff to have on board.  I mean, it does the work of a holding tank deodorizer, plus makes pump outs more complete, is good to have on hand in case of a clog and works without chemicals? I particularly like the “no chemicals” part if you direct discharge when offshore.

Unique Products offers a money-back guarantee.  You can buy Marine Digest-It directly from them (Update: the Marine Digest-It product is not available from Unique Products directly. But you can search their site for retailers.  Or buy on Amazon.  You may find it at Ace, Do-It Best and Tru Value hardware stores in marine areas (not all stores carry it).

958 Shares
Some links above (including all Amazon links) are affiliate links, meaning that I earn from qualifying purchases. Learn more.