You are here: Home / Boat Work / Hate Something in Your Boat’s Galley? 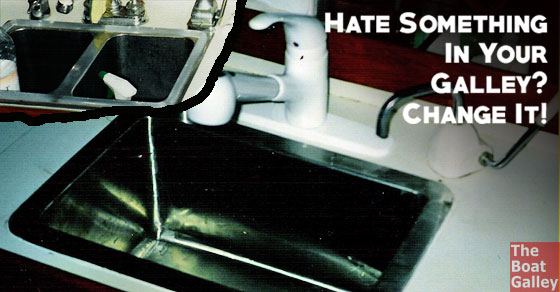 Over the years, the cruisers we’ve met seem to fall into two camps:  those who would rather live with something the way it is, and those who always believe things can be improved.  While some take it to the extreme, never leaving the dock because everything’s not perfect, my feeling is that those who seek to eliminate those little annoyances are far happier cruisers and cruise longer.

When we bought Que Tal, Dave and I didn’t have much experience with cruising boats.  So I began researching what to look for.  And when we found Que Tal, a Tayana 37, she seemed to have everything we wanted.

One of the things that pleased me was the double sink in the galley.  Everything I’d read said that a double sink was better.

After two days of living on the boat, I hated that sink.

Both halves were so small that I couldn’t put one of our plates in it, even diagonally on edge.  None of my pans would fit.  The problem was only compounded by the way the faucet extended.  The picture above isn’t great (I never thought I’d publish it), but you can see how small it is when you see that 1-liter water bottle in the left part, or compare it to the Sharpie.  Obviously, those who had recommended a double sink were thinking of something larger.

Almost immediately, I said I wanted to replace the sink with a single bowl.  I was reminded by my sweetheart that we’d decided to cruise with the boat “as is” for a year before doing any work on it, so that we could decide what the priorities really were.  I grumbled every day, and he continued to turn a deaf ear.  Until he did the dishes one day.

And so we began the process of changing the sink and faucet.  In the next “big city” — Puerto Vallarta — I began looking for a new sink and couldn’t find one that would work.  But I did find a stainless shop that was willing to custom make one for me.  And I bought a nice new faucet.

Then we began tearing the old sink out.  And I do mean “tearing.”  Turns out, it had been put in with 5200.  Dave, however, is very persistent.  Some would say stubborn.  And he had a bottle of Anti-Bond — the only thing that will work on 5200. He won the battle.

It took a couple hours to get it out.  And several more hours and two trips (by dinghy, half mile walk, then a bus) to the plumbing store, using my bad Spanish (thankfully we had a copy of Spanish for Cruisers), to get a series of connectors that eventually linked water hoses to a faucet designed for copper tubing.

But by late afternoon, I had a new sink and faucet.  Total cost about $175, including all the Anti-Bond, new sealant (not 5200) and plumbing parts.

All in all, we spent about three days on the project, although not in solid blocks.  And yes, it was a bit of a pain.  But, as those MasterCard ads would say:  “Being able to actually use the sink:  Priceless.”

That early experience with the dramatic improvement that a change can make led me to look at other problems with a new eye.  Whenever I found myself grumbling about the same problem over and over, I started thinking about what would make it better.

Yes, some of my solutions involved spending money, but far more didn’t.  Some were pretty simple:  my refrigerator box was huge, and hard to reach into the bottom.   A couple of blocks of wood on the bottom raised the bins just enough that I could reach to the bottom of them.

The budget just didn’t allow us to totally re-build the refrigerator with better insulation — or better yet, remodel the galley so that the refrigerator wasn’t next to the diesel.  But we could add insulation very cheaply in a number of places, as I detailed in an earlier article.  After doing so, we used a lot less power on the refrigerator, leaving more for the watermaker, microwave popcorn (Dave’s big indulgence) and an occasional DVD on the laptop.

We learned to talk to other cruisers and think creatively, and we were able to eliminate a lot of little annoyances.  At the same time, we didn’t let those little things keep us from cruising — we made improvements as we cruised.  After all, you can rearrange lockers just as well at anchor as in the marina!

No two boats are identical, and what bothers one person may not faze another.  Hopefully, though, some of the articles here will give you some ideas on ways to improve problem areas in your boat.  I can’t emphasize enough how changes — some small, some large — can make life aboard so much more pleasant.

In the galley, little things can change you from feeling like a frustrated galley slave to having fun, even if cooking aboard is all new to you and you’re a little overwhelmed.  No, changing my sink didn’t suddenly make me love to wash dishes — but I no longer hated it.

So what’s bugging you?  Anything you’ve changed that’s turned out well?  Anything you’re looking for ideas on?  Add your thoughts here, or on Facebook.

538 Shares
Some links in this article (including all Amazon links) are affiliate links, meaning that we earn from qualifying purchases.