You are here: Home / Living on a Boat / Fresh From the Garden on a Boat 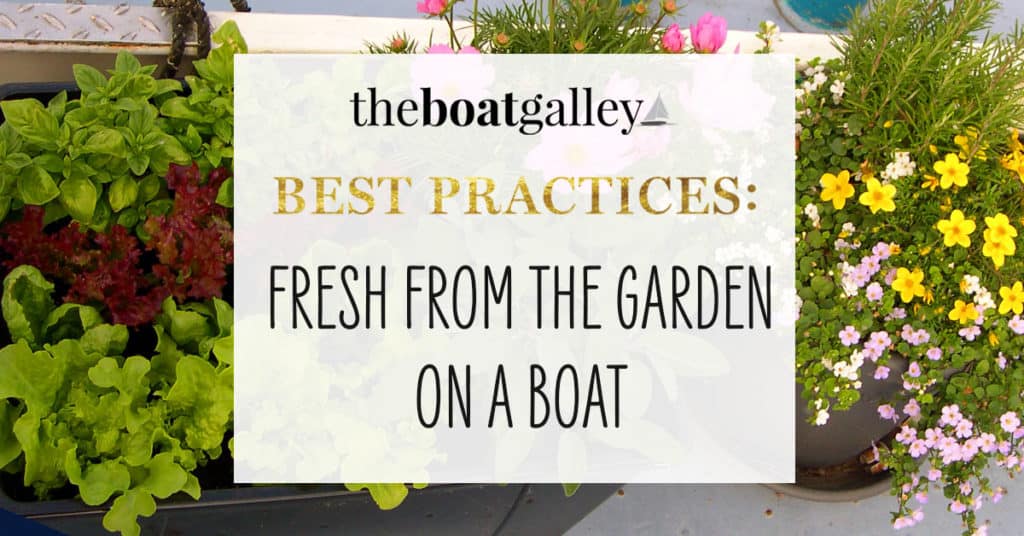 Ever wish you had a garden on your boat?  I’ve always thought it would be great, but never really sat down and thought about making it a reality.

Carol Watson did.  She and her husband spend summers on their boat — a converted workboat — in Northern Europe.  And she came up with a system for a garden on a boat that works.

If you’ve ever longed for fresh greens — or flowers — on the boat, know that it is possible.  Since greens have always been hard for me to store more than a day or two, as they quickly bruise with the motion of the boat even with a refrigerator, I love the idea of just cutting them fresh whenever I want a salad.

The Basic Idea for Gardening on a Boat

Here’s how Carol described the garden on her boat:

I absolutely cannot function without fresh salad.  The first year on our boat we had no refrigeration the entire summer, and now we only have refrigeration when we have shore power.  So, I quite early on arranged to grow my own, and it seems to work really well for us.

My husband does get a bit obsessive about moving the garden containers around the back deck, so I try to keep the growing boxes smaller and of minimum weight if I can.  I have a couple of plastic storage boxes that I’ve drilled holes in the bottom of for drainage.  I cover the holes with a disposable fiber (not paper) towel and fill with potting soil.

Some of this may work so well for us because we’re a motorboat and generally in at least somewhat protected waters, and we have a back deck that’s more than large enough to accommodate plantings – and we NEVER travel in rough weather anyway – so it’s a very stable and roomy platform, not at all tippy like a sailboat.

To get a jump on the season when we first arrive, I buy a couple of cheap seedlings at the market, and supplement with herbs (whatever I’m in the mood for that year, but I HAVE to have a rosemary bush!), and a few flowers, and just leave them on the back deck.

I’ll also start seeds, often in the plastic trays grocery store meats come in, and transplant them as needed.  The seeds I use are generally referred to as leaf lettuce, but in the States are often called “cut-and-come-again.”  I also use mixes of seeds intended for mesclun or microgreens. It’s been so successful that I start a few trays of seedlings when we get back to the States to finish out the year.

You can use the lids as intended to incubate the seeds and encourage them to sprout a bit sooner, and then under the containers to hold draining water if you want.

I use the leaf lettuces because I can harvest just a few of the larger outer leaves from each plant and have enough for a salad, but still leave the smaller leaves in the center of the plant to keep growing.  That way I can get a couple of months of growth from each plant instead of waiting for a whole new plant to grow.

And, instead of a bulky salad spinner, I follow the French tradition:  I’ve sewn a small drawstring bag of cheesecloth and after I’ve washed the lettuce I put it in the bag and give it a good swing. (Very) short term, the lettuce stores in the bag in a cool area, and is ready for dinner.

An added benefit is that other boaters are surprisingly intrigued by a floating garden and we’ve had a lot of folks stop by to talk because of all the greenery.

Other Options for Having a Garden on a Boat

Several months ago, Behan Gifford on Totem wrote on her blog about how one of their friends has a salad garden aboard their catamaran and linked to a post with more details.  It’s actually fairly simple — an over the door shoe rack and a bunch of plastic growing containers.  I think that something like this might work on most sailboats where it can be hung from the bimini, following Carol’s info on starting seeds in meat trays.

2.4K Shares
Some links above (including all Amazon links) are affiliate links, meaning that I earn from qualifying purchases. Learn more.