You are here: Home / Cruising & Chartering / Electric Windlass as a Safety Feature 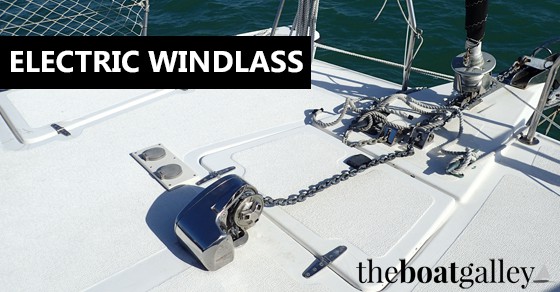 Both of our boats came with an electric windlass and I understand that they are pricey and that wiring can be challenging. At the same time, I’ll argue that it’s money well spent.

Without an Electric Windlass

Cruisers without an electric windlass tend to anchor in shallower water and often use less scope so that it will be easier to retrieve their anchor. This combination means that they:

When we were cruising in the Sea of Cortez, we knew of two boats that were lost due to this combination of factors, and several others that were damaged as they bumped the bottom.

Benefits of an Electric Windlass

One benefit of having an electric windlass is that it is relatively easy to re-anchor if you decide that you don’t like the spot you’ve picked after you’ve let the required scope out and can see where you’re sitting. Our rule is that we’re not anchored until we’re both comfortable with where and how we’re anchored. If one of us is a little nervous, it’s not good — we won’t be relaxed, won’t be enjoying ourselves and won’t get a good night’s sleep. And despite ten year’s experience in choosing our anchoring spot, sometimes we still feel the need to move a little after seeing how we lie.

We are also much more willing to move in response to changing conditions. Last summer in the Bahamas, a squall approached as we were in a tight anchorage between Leaf and Allen’s Cays. The wind shifted 90 degrees and put our boat closer to the beach than we were comfortable with. It took us less than 10 minutes to move about 100 feet — and thus it was feasible to do so before the squall actually hit.

The Problems with No Windlass

Obviously, having no windlass is the worst scenario as it is almost impossible to hand pull an anchor as winds build and white caps start forming in the anchorage. Injuries also become extremely likely . . . nasty things like broken bones, crushed fingers, and wrenched backs. Hand-pulling an anchor in a 40-knot squall with 2-foot waves is virtually impossible even if you try to motor up on the anchor as the wind will keep blowing the bow off and rip the rode out of the puller’s hands.

Even in calm conditions, hand pulling an anchor is tough work and not something that most of us want to do every day. On our Tayana 37, I could not have hand pulled our 66-pound anchor; if I absolutely had to, I probably could pull the 35-pounder on our current boat but it would be a very long and slow process. Even if Dave were willing to hand pull the anchor routinely, our rule is that we both have to be able to do everything on board in case the other one is sick or injured. An electric windlass makes it so that I can pull the anchor.

A manual windlass is definitely better than no windlass, and even has some advantages over an electric. But electrics also have their advantages.

The primary advantage is a manual windlass is they are less expensive and simpler to install as there is no wiring.

In general, manual windlasses are slower than electric ones — the exact speed difference depends on the two models being compared. That can be important in deteriorating conditions.

Manual windlasses are somewhat safer than electric: not that you can’t catch a finger or piece of clothing in one, but they can be stopped faster.

Manual windlasses aren’t susceptible to electrical gremlins, but they still have to be maintained to work properly.

Finally, manual windlasses are tough to use if you are single-handing — or effectively single-handing due to an illness or injury. While an electric windlass can be wired to use it from the helm (both of ours have been), you must be up on the bow to operate a manual windlass. It’s tough to motor up to the anchor and then run forward, pull up part of the rode as the boat drifts back, run back and motor back up, etc. Again, this can be a big problem if conditions are deteriorating, with winds and waves increasing.

Dave and I firmly believe that an electric windlass is important for safety — anchoring a little further from shore, using more scope, moving if you don’t like where you are or if conditions change and also so that everyone aboard can raise the anchor if need be.

While we prefer an electric to a manual windlass, there are some advantages to a manual one and some will find them a better fit for their needs. Just also be aware of the cons and realize the tradeoffs you’re making.

Whichever way you go, your back will thank you!

771 Shares
Some links above (including all Amazon links) are affiliate links, meaning that I earn from qualifying purchases. Learn more.