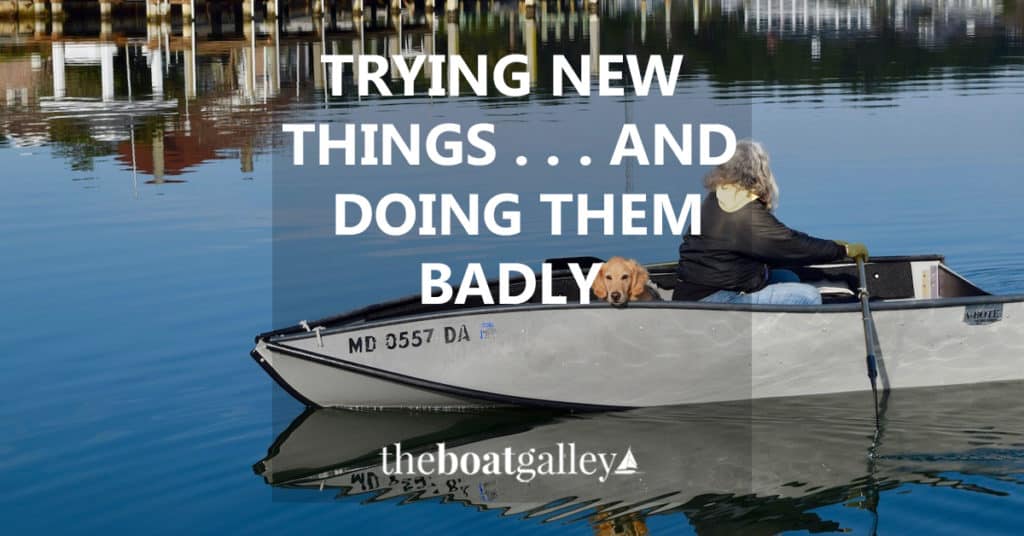 When I wrote about the willingness to try new things being a cruising skill — and one you could practice in the years or months leading up to untying the dock lines, my friend Pamela Douglas Webster added a wonderful comment about an associated skill. I loved it and we talked back and forth some. Finally, I asked if she’d be willing to elaborate in a post because her thoughts were just so perfect for all of us who are a little fearful of trying something new in case, you know, we aren’t wonderful at it.

You can follow her blog about life with her golden retriever Honey (and husband Mike) at Something Wagging This Way Comes.

Not enough people who write advice for wannabe cruisers highlight the need to be willing to try new things. Because when you move onto a boat, nearly everything will be new to you.

But the pain of scratching your hull or breaking a toe is nothing compared to the emotional pain that accompanies the discomfort some people feel when doing stuff badly.

Being a Bad Sailor

I got a lot of practice being a bad sailor when I started lessons at the community sailing program in my mid-40s.

Although I could describe the Bernoulli effect and how it caused a sailboat to move forward, to this day, I still don’t understand it in a concrete way. After the hundredth time pushing the tiller the wrong way from where I wanted to go, my only source of hope that I would ever improve came from something my first instructor told me: “Don’t get discouraged. I find that people who take the longest to figure things out are usually really good sailors once the information clicks.”

That encouragement kept me going with sailing until it did click. And when each new skill found its place in my muscle memory, sailing felt more natural.

From the start, my husband was a much better sailor than me.

His superior grasp of physics and geometry made him a stronger boater than me from the very beginning. But my husband lacked one emotional skill that made cruising a special challenge for him while to me, it felt natural.

What Makes An Unhappy Cruiser

My husband has the blessing (or perhaps, curse) of doing many things very well—much better than the average person. But with few serious struggles, he’s never learned to deal with doing things badly.

On land, if Mike found something hard, he’d avoid it. Why make yourself miserable stinking at something you don’t have to do? And besides, it’s easy to pay other people to do things for you that you do poorly or don’t enjoy.

But cruising, you don’t have that luxury.

Even in our far-from-remote cruising grounds of the Atlantic Intracoastal Waterway and the Chesapeake Bay, we have to rely on ourselves to fix a finicky outboard or deal with a furling jib that gets hung up at just the wrong time. And when solutions didn’t come easily, my husband experienced a lot of frustration.

Our boat served as the setting for a creative range of curses, the likes of which have probably never been heard over such relatively minor issues.

What Makes A Happy Cruiser

In contrast, I came to cruising expecting it to be hard and knowing I would stink at it. I assumed that most things would start out hard and that over time, I would get better at them.

After all, I started out stinking at just getting the boat to move under sail. But every time I docked without an engine or trimmed the sails so the telltales fluttered perfectly, I felt a sense of accomplishment.

I expected the same growth curve for cruising too.

And because I didn’t dissolve into a puddle of self-hatred every time I bumped a dock or failed to bring a mud-covered anchor up solo the first time I tried, I felt free to notice things I actually was doing well.

I feel a great sense of accomplishment at hand-steering a straight compass course in a rough Georgia sound or suggesting the solution that quickly helped us unwrap the anchor rode from our keel in a confused anchorage.

Expecting to be bad at cruising skills and not letting it defeat you gives you emotional room to notice and feel a sense of pride when your skills improve.

And when the next new skill comes along (because cruising is a never-ending skills test), I tell myself, “You’re going to stink at this. Do it anyway.”

The Most Important Cruising Skill

If you ask my husband, you’ll find that I’m not always a Zen master of calm when things go badly. Luckily, he loves me enough to follow my cruising dream, despite his discomfort with the learning curve and my less-than-perfectness.

And I’ve been privileged to watch his growth in the essential skill of feeling comfortable with doing stuff badly.

In fact, I don’t think any skill is more important for cruisers than the ability to feel relatively comfortable doing things badly—at least until your skills and knowledge base improves.

It’s a skill that you need no matter how many years you cruise. Because every cruiser will continually face challenges to their skills. This is something we recently learned when an 18-year, single-handing cruiser with experience on two oceans let the current catch him by surprise and ended up wrapping our anchor rode around his propeller trying to regain control.

Since we moved on board in September 2015, we’ve learned more about weather, currents, anchoring, navigation, diesel engines, electrical systems etc. than we could have ever imagined.

But I don’t think any skill has been more important in cruising than being willing to stink at new things without it making you want to give up.

580 Shares
Some links above (including all Amazon links) are affiliate links, meaning that I earn from qualifying purchases. Learn more.