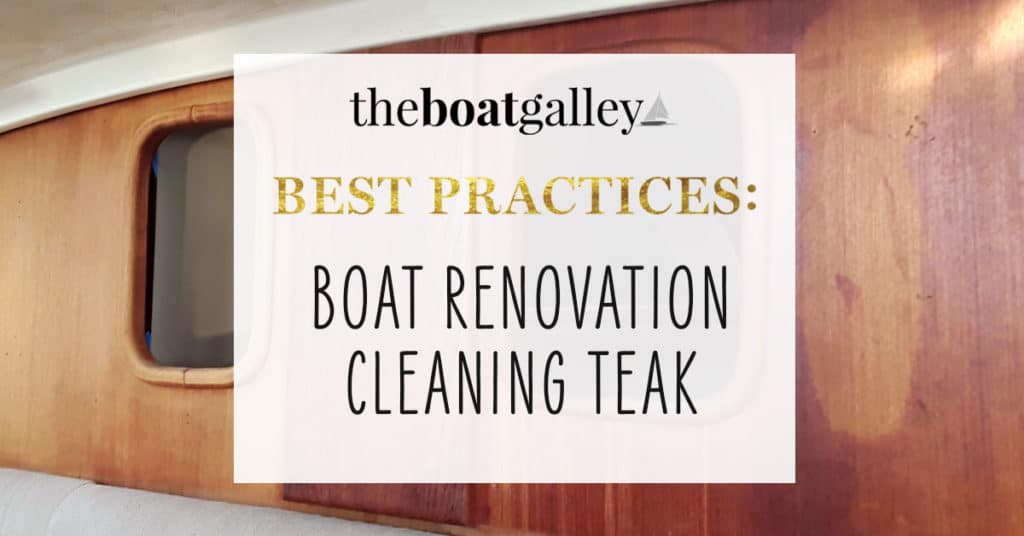 Step one in our boat interior renovation was to clean and refinish all the interior teak. There were several problems that needed to be addressed: it was very dark, there were light places where previous owners had pictures, there were screw holes, and there was what can only be called a gunky buildup where hands had rubbed daily. And on what should be a gorgeous showpiece counter, there were black rings from where — apparently — a can of used oil had been set down.

In this article, I’ll talk about choosing a teak cleaning and finish system. In subsequent weeks, I show the step by step process I used to clean the teak, finish it and fill in all the screw holes.

Here’s what I was starting with.

The rail next to the steps to go down into each hull was literally black with oil and gunk from hands grabbing it many times a day. The teak in many areas of the galley was also black.

My goal was to clean the teak so that the black was gone and it was a uniform color — hopefully a nice light teak color, not the dark almost mahogany color that it had become. Then I wanted some sort of a finish on the teak to protect it and keep it looking nice.

Another option was Cetol, which gives a look similar to varnish. It just wasn’t the look I wanted and it can also bubble, crack and peel.

I was looking for both a cleaner and a finish, and I knew that usually, it was best to use products designed to work together.

I knew that previous owners had used teak oil on it — I’d found numerous partial bottles of different brands when we’d first moved aboard. But my basic research said that most teak oils simply fed mold and the blackening.

I’d used Semco on the teak on the exterior teak on our previous boat, Que Tal, and that was a possibility — Semco is very much like Thompson’s WaterSeal, but for teak on boats. Semco is extremely easy to apply, but I wasn’t sure it really was the look I wanted inside the boat.

And then there was the whole cleaning process. I knew this was going to be a big project, and wanted something that would work with a minimum of effort. But I also wanted something environmentally friendly. And since I was working inside the boat, I didn’t want anything that required massive hosing down or caustic chemical brews. I didn’t want anything that would hurt the gelcoat abutting the teak. Most two-part solutions were quickly ruled out as being too harsh, not environmentally friendly, hard to use and potentially damaging to the gelcoat.

I began researching and after a bunch of reading, discovered the Teak Guard family of products. The Super Cleaner got high marks for effectiveness and ease of use, as well as the fact that it was non-toxic and wouldn’t harm gelcoat. Further, it would actually kill any mold or mildew spores present so that the wood wouldn’t start blackening under my new finish. (I learned that solutions using bleach or TSP also won’t kill the mold and mildew.) I was somewhat skeptical of the claim that it took only 1/10 the labor of the company’s previous cleaner formulation but I thought that it looked like the best option I’d found.

The Teak Guard Finish also looked like a winner. First, it would not feed mold and mildew. Second, it breathes so that any moisture in the wood can simply escape rather than causing the finish to crack and peel — the problems I’d had with varnish and Cetol. I absolutely did not want something that I would have to repeatedly clean or sand in the future both from a work standpoint but more importantly because most of our teak is thin veneer and simply can’t be sanded many times before it will be gone.

Much of the TeakGuard literature talks about using it for exterior applications (including boat decks), and so I called the company to get a little more information. Yes, it can be used inside. For outside use, they recommend a maintenance coat every year but as the interior gets far less UV, it would probably only be needed every two to three years when the finish started showing a haze. But there is no sanding or deep cleaning needed before the maintenance coats — just washing with soap and water.

The fact that Teak Guard produces a non-slippery finish was a bonus. I’d long wanted to redo the floors with something other than the varnish/urethane that was presently on them and eliminate the rugs — I wanted to see the beautiful teak and holly floors.

All in all, this sounded like the type of cleaner and finish that I wanted!  There’s also the fact that I liked the look of Teak Guard Finish in their pictures.

I ordered their “Starter Kit” and began by cleaning and finishing one sliding door handle to see how it worked and if we liked the look. Yes, we did! I continued with the project, cleaning a small area each day, letting it dry overnight and then putting several coats of finish on over the next few days. The company recommends waiting no more than a day between cleaning and finishing so that the wood’s natural oils won’t rise to the surface and allow mold to begin forming again.

It is slightly cheaper to buy a small bottle of the Super Cleaner and one of the Finish than to buy the Starter Kit that includes various cleaning tools. I used their tools at first, and they’d be good for teak that is not badly stained. I ended up using a somewhat different technique for dealing with my really awful teak from the instructions they gave — I’ll detail it and the tools I used in the next article in this series.

For any substantial amount of teak work to be done, their half gallon bottles are a far better deal. As my teak was in such awful condition, I found that I needed about twice as much Super Cleaner than what their usage guidelines suggested. I put 4 coats of Finish on most vertical surfaces, 6 to 8 on horizontal surfaces and 10 to 12 on high traffic areas such as handholds and handles.

For now, I’ll show that counter as it was partially cleaned and then as it was when completely finished (the “before” picture is at the top of this article):

And here is the wall behind the settee, half “before” and half “after” the first pass of cleaning. I did still do a little more cleaning on the left-hand side so that it was an even color:

Note: I chose TeakGuard products through my own research and initially bought the products at retail. Highly impressed with how well they worked, I contacted the company with before/after photos to show just how well it had worked. One thing led to another and they gave me additional amounts of their product to complete the job.

897 Shares
Some links above (including all Amazon links) are affiliate links, meaning that I earn from qualifying purchases. Learn more.