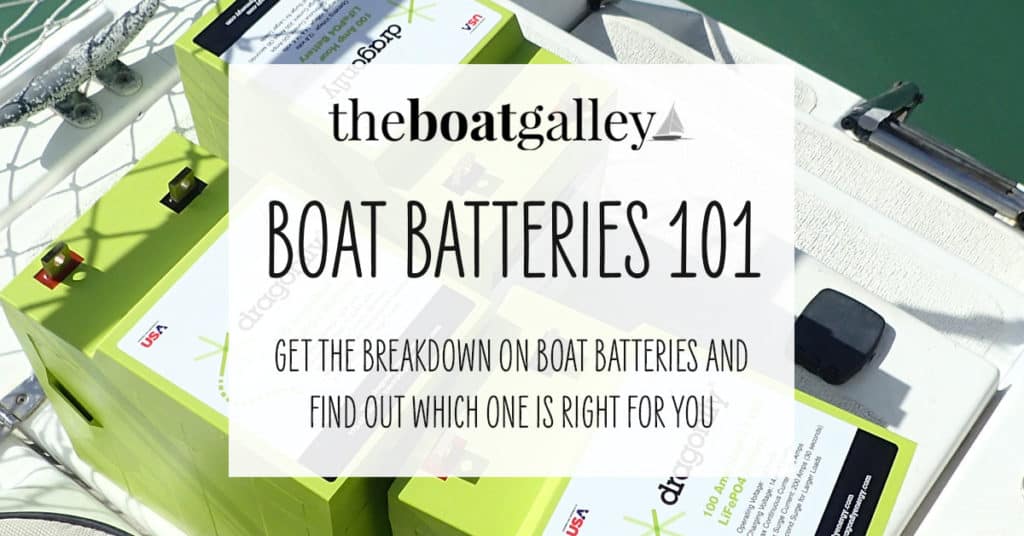 The battery bank on a cruising boat is the (hopefully) beating heart of the marine electrical system.  While at first glance it may seem to be a simple system, it is perhaps the most complex and misunderstood component. There are many types and chemistries of batteries, different sizes, different intended uses and confusing and often outright misleading labeling.

Battery systems are so confusing that when the time comes to replace batteries, many boat owners choose to just either copy exactly what was in the boat before or get whatever an installer says is the best option.  The dual problems here are the previous boat owner probably just did the same thing or didn’t have access to more modern options, and frankly, many installers don’t know any more about battery technology than the distributor’s brochures told them.

Cycle or Cycle Life: For batteries, a cycle is a discharge, followed by a recharge. That’s it. For boats using solar as their main source of charging, it’s simple as a cycle is generally 24hours. Cycle Life is the number of times that a battery can be charged and discharged before its total capacity falls below a set amount, generally 80% of original capacity.

AH or Amp Hour: An AH is a unit to measure the amount of energy used or stored. Batteries are rated in AH it can hold. There is a lot more to AH than we will get into here; for now, more AH equals more capacity.

Deep Cycle, Starting and Dual Purpose Batteries: Deep cycle batteries are those designed to sustain discharge for long periods of time with thick heavy plates but are limited in the amount of instant power they can supply, versus a start battery that has more and thinner lead plates and can provide lots of instant power but will die quickly if discharged for longer periods.There are also dual purpose batteries that are a blend of deep cycle and start characteristics; some types are better at this than others.

C Rate: C Rate is complicated. For simplicity’s sake, C Rate is the ratio between Capacity, Time, and Current being drawn. For example, a battery will usually be rated at a C20 rate. A 100AH capacity battery rated for C20 will provide 5 amps for 20 hours before being fully discharged.

Depth of Discharge (DOD): This is how far a battery or battery bank has been depleted. Most often expressed as a percentage. Commonly saying a battery has reached 80% DOD means the battery only has a remaining capacity of 20%.

There are four primary types of batteries used on boats.

Flooded batteries are the granddaddy of battery types and probably still the most commonly used battery type for starting engines and deep cycle applications in boats and RVs.

AGM Batteries were once the advanced battery technology on the market, having features that improve upon FLA batteries.

Gel batteries, while an option in a few circumstances, are not often used on boats anymore.

LiFePO4 batteries are a revolution in deep cycle storage technology. They outperform every other chemistry in every category.

Read more about lithium batteries and Carolyn’s decision to switch to them here.

Batteries come in a variety of sizes. Often denoted by Groups, GC10, L16, etc. These denote the physical size of the battery, not its capacity in AH. When it comes to choosing your battery size, there are a few considerations.

If you can afford the upfront cost, AND you plan to keep your boat at least 10 years, there is almost no reason not to get LifePo4 batteries. They are truly a game-changer. The list of advantages is enormous.  More and more people are adopting them; they are no longer a niche or “new-fangled” technology. I’ve yet to hear of a single soul who purchased them and regrets it. Again, if they are in your budget and you’re keeping your boat long enough for the initial investment to amortize down to a reasonable price, you wasted time reading this article, just get the LiFePo4.

If spending a thousand dollars per 100AH battery isn’t in your plans, 6V FLA batteries are usually the best choice. You can build a large reliable battery bank cheaply. Taken care of properly, the lifetime cost is comparable to LiFePO4, and in 8 years when your FLA bank dies, maybe the upfront cost of LiFePO4 will be more palatable, or one of the dozens of other new techs in the pipeline will come in better and cheaper than LiFePO4. I personally chose FLA for my boat a year ago. I ran a 5000BTU air conditioner 24/7 last summer in my aft cabin in the Florida Keys without shore power or a generator, so a well-designed system based on FLA can still do great things.

Honestly, unless you think you’re going to forget to add water to FLA batteries, or you need dual-purpose batteries, there are few reasons to go with AGM/Gel batteries based on the cost to performance ratio significantly lagging both FLA and LiFePO4.

I hope this helped sort out and demystify the battery buying process. If you have questions or additional thoughts, please leave them in the comments.

Cory Nickerson sold everything, bought a boat, and is currently cruising the North American east coast with his wife Mendy aboard their CSY 44.

441 Shares
Some links above (including all Amazon links) are affiliate links, meaning that I earn from qualifying purchases. Learn more.