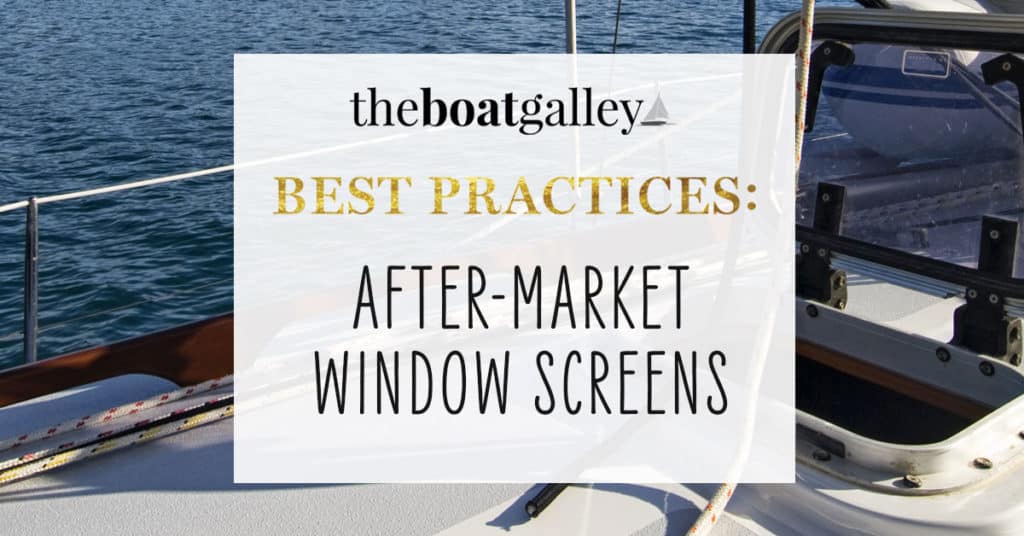 Need new or better window (port or hatch) screens for your boat? Aftermarket screens from Waterline Designs are a solid option that’s less expensive than most hatch manufacturers’ offerings and will even keep no-see-ums out.

Our boat came with screens for the four main hatches. They were part of the Bomar hatches that had been used when the boat was originally built. But that was 17 years ago, and we’d begun to notice a few problems:

To be honest, most of the time we don’t use screeens. If there are no bugs, we prefer the extra ventilation of not having a screen in. But if there are mosquitoes or – worse – no-see-ums, we want screens!

We used them anchored off mangroves in the Florida Keys – notorious for both mosquitoes and no-see-ums unless the wind is blowing – as well as in a few “no wind” anchorages in the Bahamas. Overall, we liked them.

So, how do they mount? There’s an ingenious suction cup/drawstring arrangement. The suction cup goes on the hatch and then the drawstring with cord lock is tensioned to keep the screen snug on the hatch or port opening. For vertical portholes that open in, the screen will be on the outside. The company’s drawing shows it far better than any of the photos I took.

We were a little frustrated trying to get them “just right” at first, but within a few days started to get the feel for making them tight enough to keep out bugs but not so tight as to pull them off. Strong winds would dislodge the suction cups and the screens would drop into the boat, but if there were strong winds there weren’t bugs so it wasn’t a problem.

Sizing: you want the screen to overlap the hatch area by at least an inch, two is better. We should have used the next larger size. If in doubt about the size you need, order larger. Their website FAQ has good information on how to measure and get the right size — I made the mistake of not actually measuring when I told them the size of our hatches (oops!).

The Waterline Designs screens cost much less and take up a lot less space than “original replacement” screens or custom screens. While there’s a learning curve to putting them up, once you’ve mastered it they do a good job of keeping mosquitoes and no-see-ums out of the boat. Some air flow is blocked, but no more so than other no-see-um screening. And if you want to sleep while it’s still daylight out, their light blocking shades are excellent.

468 Shares
Some links above (including all Amazon links) are affiliate links, meaning that I earn from qualifying purchases. Learn more.