You are here: Home / Common Problems & Concerns / 3 Lessons from a Boat Fire 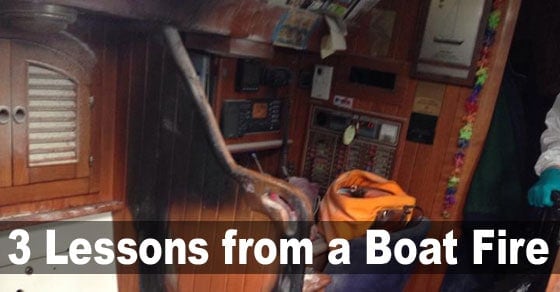 In 2014, Heidi Husler Hackler posted the photo above on the Women Who Sail Facebook page, with the following note.  She graciously allowed me to use her photo and story to “spread the message.”

Early yesterday morning we had a fire aboard our Passport 40 at the dock (electric radiator heater caused.) Luckily the smell of smoke from burning carpet and upholstery woke us up (please install a smoke detector if you don’t have one, we are very lucky to be alive!) And luckily Kirk was able to put the fire out w/ two fire extinguishers before the Seattle Fire Dept showed up 9 minutes after I called 911. Luckily we are insured and everything is repairable…

At this time, I don’t have any more details on the origin of the fire.  Heidi plans to write up a post with more info, and when she does, I’ll add the link here.  UPDATE: Heidi wrote up her story but and posted it but has now taken the blog down.

But for now, the three lessons:

In addition, a carbon monoxide detector is also a good thing to have (some smoke detectors also have a CO detector, such as this one on Amazon; you can get them at home improvement stores, big box stores and hardware stores, too).  Be sure to change the battery annually!

Heidi’s experience also makes me think of two other things.  First, if you are in a marina and have even what seems to be a minor fire, call 911 (or the local equivalent) and if possible, make an announcement on the VHF to both warn nearby boats and to get them to bring extra fire extinguishers.  Fires can get out of control quickly and your fire extinguishers may not totally put it out.  Get help on their way to you ASAP!  If you’re lucky, you can just greet them and tell them it’s out; if not, they’ll be there all that much faster, lessening the risk of the fire spreading.

Second, take the time to think about what you should do in a fire (read more) and have fire drills (read more).  They’re every bit as important as MOB drills!