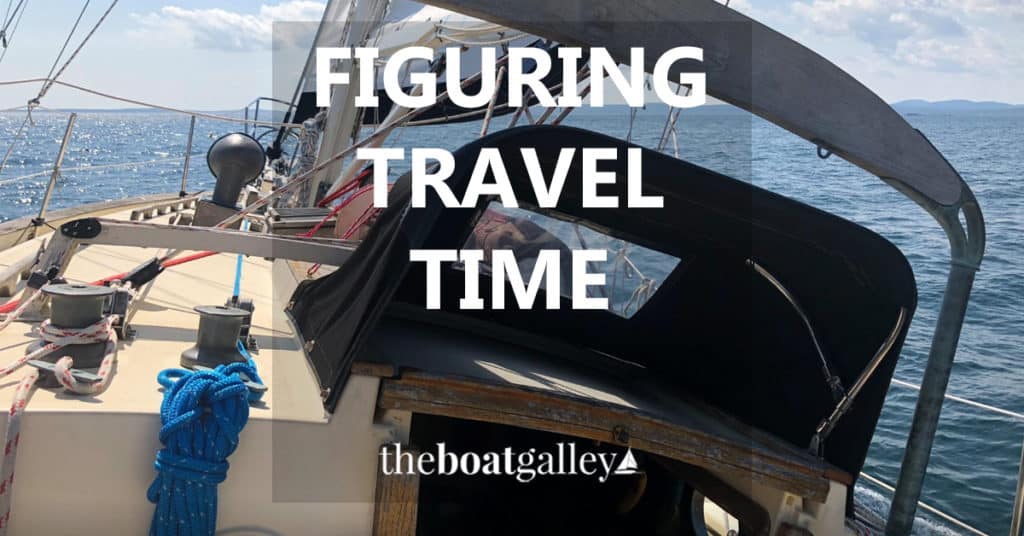 “You can’t have a schedule.”

“Schedules will get you into trouble.”

“Always allow plenty of extra time to get somewhere.”

“The weather will dictate your travel.”

Before we start cruising, we hear these words of wisdom from experienced cruisers and think we understand the meaning. But we don’t. Not really.

We’re used to traveling by car, by plane, even by bus, train or metro. We decide when we need to be somewhere, figure out how long the trip is likely to take, give ourselves a little extra and off we go. Maybe rain or snow will slow us down a bit, but land travel is remarkably predictable.

Travel by boat just isn’t. Weather and nature play a far bigger role. Wind. Waves. Swell from a system over a thousand miles away. Current opposing wind. Needing to time a cut with the tide. Where there’s an anchorage. Fog. Lack of wind. Restrictions on entering an area, or exiting.

And, I hate to say it, but there seem to be more mechanical problems with boats than cars. I remember when I was a kid, the family car would periodically break down on a trip. But that’s pretty rare now. We’re not used to delays of that sort — or that we might have to fix it ourselves.

To me, both from our own experience and talking to others, the unpredictability of travel time is one of the biggest lessons of first-year cruising.

Coming from land-based travel, it seems totally reasonable to say something like, “I can easily make 40 miles a day. And where I want to go is 400 miles away. So that’s 10 days. I’ll give myself two weeks since everyone says to allow extra time.”

It might work; more often you might either find yourself making alternate arrangements to get there (such as putting the boat in a marina and taking a bus) or traveling in marginal — or worse — conditions.

The past few weeks I’ve had notes from a couple of readers and seen a whole lot of Facebook posts of people not getting where they wanted by a specified date. One, Larry Webber, gave me permission to share his story to show how the delays just happen. He bought Catriona, a 31′ Pacific Seacraft Mariah in July in Rockland, Maine. The original plan was to start heading south in mid-August.

Larry thought that four weeks was plenty of time to go 600 miles from Rockland, Maine to Annapolis for the boat show. The family he’d bought the boat from did the reverse trip with their new boat in two weeks. A singlehander, and new to cruising, Larry admits that he’s still getting into the rhythm of being on the move. And learning to equate weather forecasts with he actually sees on the water. Each decision, taken in isolation, is simple. The cumulative effect of all the individual decisions gets complex.

This past week, he had to make a choice: forget about the boat show (no), sail Catriona to Newport, RI where there is a military marina where he could leave her while going to the boat show by land, or leave Catriona where she was in Scituate, MA and travel by land from there.

At first, he said, “it looked like there’d be a great 4 or 5-day window to get down to Newport, maybe even New London. Then it was a 3-4 day window. Then a half day in the middle of that which was really adverse.” There were also budgetary concerns: leaving her in Scituate would be considerably cheaper than Newport or New London, even with the below-market-rates of the military marinas.

As the weather forecast for getting to Newport looked increasingly iffy, he went with the safe option of leaving her in Scituate. At the same time, he’s questioning not just this decision, but all of them. Deciding to stay in Rockland to install gear. Not pushing harder on good days. Not pushing harder in marginal conditions. Not trying to make Newport.

Larry’s note to me said that the transition to boat travel has been more trying than he expected. “So many parts, all constantly moving!”

From the others who have written me with similar tales, it’s not a matter of being unprepared. Of not knowing how to sail or plan a passage. It’s just that learning to do it day in, day out — figuring tides, winds, timing cuts, figuring stops and backups — is hard. Made even harder by the fact that for however many years we’ve been traveling on land, things usually went pretty much according to plan.

Cruisers joke about plans being written in Jell-O on a hot day, or in the sand at low tide. We say we understand that when we start cruising, but all it takes is our first trip to grasp that we really didn’t. We all start out making plans and having schedules because that’s what we’ve done all our lives. And we soon learn that Mother Nature may have different plans. And hers win.

565 Shares
Some links above (including all Amazon links) are affiliate links, meaning that I earn from qualifying purchases. Learn more.