You are here: Home / Boat Work / Switching from Ablative to Hard Bottom Paint 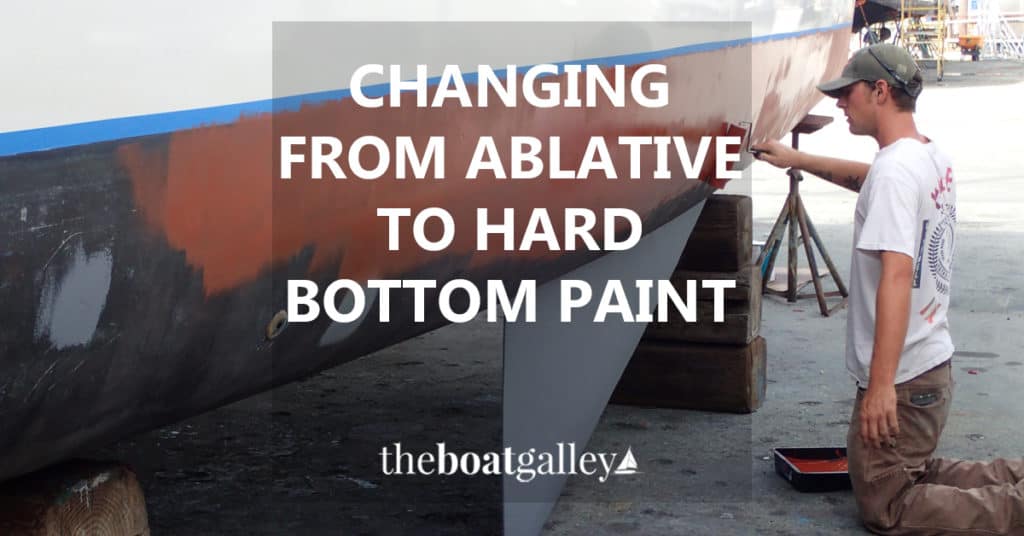 One of the big things we wanted to do on our recent haul out was to switch from ablative to hard bottom paint. We had always used hard paint on our previous boat, Que Tal, but had decided to use ablative on Barefoot Gal for a couple of reasons:

The Reasons for Changing

After four and a half years with ablative paint, it was clear that it just wasn’t doing its job to keep the bottom free of growth. In the fall of 2014, we’d put on 3 coats of Hydrocoat SR. Fall of 2015, two more. Spring of 2017, one of Micron 66. Throughout that time, we’d had have the bottom cleaned every three to four weeks . . . and it could be argued that just before each of the repaintings, two weeks would really have been better.

The idea behind ablative paint is that it wears off slightly as you travel through the water, so fresh paint is always being exposed and the barnacles and other growth never get a real start. While ablative paint is marketed for cruising boats, I’ve come to realize that it’s really better for commercial boats that run every day and at higher speeds.

We weren’t on the move every day, and our top speed on a really good day is maybe 7 knots through the water. Consequently, we were having to clean the bottom frequently. Ablative paint is soft and comes off just as easily (maybe more so!) when cleaning it as when moving. Every time we cleaned the bottom, we lost more bottom paint and made the situation just that much worse in the long run. Basically, a downhill spiral.

We were pretty certain that we wanted to switch to hard paint, but asked our bottom cleaners (Derek and Chris of Obsessive-Compulsive Divers in Boot Key Harbor) what they were seeing among the boats they clean. Derek was blunt: “Hard paint is definitely better; ablative just doesn’t hold up. By far the best we’re seeing is Trinidad.”

Changing wouldn’t be cheap, but we decided to do it. Sticking with ablative and paying $100 every few weeks for a bottom cleaning (or spending a day doing it ourselves) wasn’t cheap either. Based on Derek’s advice, and the experience of my podcast co-host Nica Waters and also Behan Gifford of Sailing Totem, we decided to go with Trinidad SR.

How to Change from Ablative to Hard Bottom Paint

The basic issue in switching from ablative to hard paint is that the ablative paint can still try to wear away under the hard paint and will take the hard layers with it. If there are years of ablative paint build up, the recommendation is to soda blast the hull back to gelcoat. But soda blasting is expensive — around here, in the neighborhood of $3,000 for a boat the size of Barefoot Gal. And that’s in addition to the cost of the haul out, the paint and the labor. Another option would be to sand back to gelcoat, but around here that’s more expensive than soda blasting.

We had only had six coats of ablative paint on the boat since we had taken it to bare gelcoat. And to be honest, much of that was gone. A good pressure washing at the haul out would take off even more. We were hopeful that we could get by with a less expensive prep.

We opted to have the bottom aggressively pressure washed, and then heavily sanded to remove as much of the old paint as was reasonable — but that did not take it all the way back to gelcoat except in high-wear areas. Then we had Pettit Tie Coat applied to the whole bottom. The first coat of bottom paint — in our case, Trinidad SR — is applied while the Tie Coat is still tacky so that there is a chemical bonding between the two.

Tie Coat is used between two materials that otherwise wouldn’t bond well. It is extremely “sticky” paint that bonds to nearly anything. The extra sanding and Tie Coat application cost us about $1,000 (again, in addition to the regular haul, pressure wash, paint and labor charges).

Not cheap, but better than soda blasting. And if the bottom job lasts two years instead of one, and if we don’t have to have the bottom cleaned as often, we might just be money ahead. (We normally haul out and repaint every year but did not in 2018 due to Hurricane Irma — boatyards simply didn’t have space for us).

I don’t want to give the impression that using Tie Coat instead of removing the old paint will work for everyone. In fact, Pettit’s technical support recommended that even with the little bit of ablative paint we had on the boat, we should have it soda blasted in order to get the best possible adhesion. They definitely said that if we had more than 8 coats of paint or if it was peeling or cracking off at all, it needed to be gotten rid of.

We know that we’re taking a risk with doing it the way we did. We might have made a mistake and “wasted” $1,000 instead of saving $2,000. But that’s how things work in the real world. We do the best we can with imperfect information. We made a decision and will see how it plays out over the next couple of years.

357 Shares
Some links in this article (including all Amazon links) are affiliate links, meaning that we earn from qualifying purchases.