You are here: Home / Buying a Boat & Gear / SodaStream 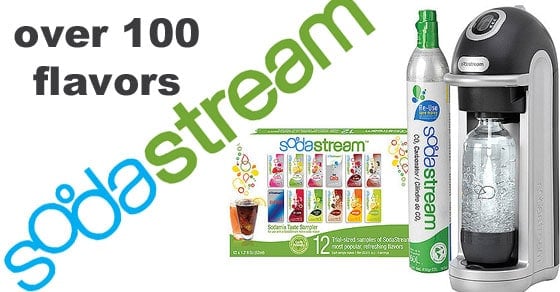 Lots of cruisers are using or are contemplating the SodaStream! A while back, a couple of readers asked questions about their suitability on TBG’s Facebook page. Several other readers gave their opinions there and several more sent me e-mails, plus I’ve done a bunch of research on questions they asked — as well as some others that I had.

I’ll start by saying that I don’t own one (although I have used them on other boats), so this is a compilation of information from others.  And I’ll apologize for what’s going to be a fairly long article, with two videos.  But there’s a lot of information to cover when it comes to suitability for cruisers — and no definitive yes/no answer.  But it seems that those who have decided it’s for them love the SodaStream.

There are four sections to the information below:

A SodaStream is a method to make your own soft drinks, tonic water and “fizzy water.” There are seven different units, all about 5″ wide by 17″ high by 8-1/2″ deep.

The unit does not use electricity.  There is a CO2 cartridge, a 1-liter bottle, and flavor mixes that you can add.  This SodaStream video explains it very well (it’s about 2 minutes long):

The SodaStream takes a lot less space and weight than carrying a bunch of soda cans, not to mention getting them aboard — but there is the unit itself and the flavor bottles and carbonators.  And it produces a lot less trash and you no longer have to deal with sometimes getting paper-thins cans that develop leaks or split.  The jury seems to be out on whether it saves money — that probably depends on the cost of soda where you are.

I can’t say whether a SodaStream is right for you and where you’re cruising.  So much is individual preference, but I’ve tried to lay out the things that you need to think about as one would be used on a boat. The cruisers who have them (and who gave me an opinion) all seem to love them, but others decided against getting one as they decided it wouldn’t fit well with their cruising (generally because of problems getting carbonators or they thought there would not be any cost or space advantage).

For those boating in the US, Canada, Great Britain, Australian or New Zealand, where supplies are easily available, the decision is much easier.  But several cruisers in the Caribbean absolutely love theirs, as do many in the Sea of Cortez — they’ve figured out ways to either get supplies or developed do-it-yourself alternatives.

There are 7 SodaStream models available. Update: As of September 2018, the company appears to have streamlined their product line to three styles. Visit SodaStream to learn more. The company has a nice comparison chart, and it’s useful to know that the prices roughly increase as you go from left to right.  For use aboard a boat, however, I’d opt for the lowest priced unit, called the “Fountain Jet” model (sometimes just called the Jet) — it is the simplest mechanism, uses plastic bottles (some of the high end ones use glass) and is all-plastic construction. Further, the product comparison page says that it can use either the smaller OR larger carbonators (I’d think that the large ones would be more convenient on a boat).  Wherever you buy it, note that it comes with a SMALL carbonator, not a large.

You can buy them on Amazon or directly from SodaStream:

(Update: SodaCo2 appears to be out of business. A similar company, named SodaMod offers many of the same products.)

Yes, it’s completely possible to refill the carbonators yourself, as long as you’re in a place where you can get a tank of CO2 — depending on where you are, check with restaurants or bars to see where they get tanks for their soda and “on draft” beer.  If there are paintball enthusiasts around, find out where they refill their cartridges. (If you already have a paintball refill setup, you may only need an adapter, available from SodaCo2. The adapter won’t work as a standalone, though — you need the refill kit detailed below.)

Because SodaStream (formerly called Soda Club) makes a proprietary cap and thread, designed to thwart DIY refills, you’ll have to get an adapter.  And of course, several entrepreneurs sell them.  A company called SodaCo2 seems to be the leader, with how-to videos and promising plenty of customer support — and they’ve found all the right parts to make it all work.

I have not used this product so I can’t vouch for it — but I’ve spent hours online researching what is available and this is the setup that other cruisers were talking about on CruisersForum (Thanks to Laurie on Facebook for telling me about it!).  After looking at some others as well, I’d say that this looks to be the best solution if you want to refill the tanks yourself.  And no, it’s not endorsed by SodaStream.  In fact, they discourage it.  That happens a lot with adapting things for cruising — it’s up to you whether you are comfortable going against manufacturers’ recommendations.  It’s your decision, not mine (in other words, I’m not responsible, I’m just providing information if you decide you want to do this).

The adapters aren’t cheap — about $125 as I’m writing this.  A tank of gas is about $20 (and could fill 10 to 20 carbonators — it won’t all transfer, but one tank is likely to be more than just one boat would use).  But just one “large” carbonator refill from SodaStream costs $30 plus shipping, so it can definitely save you money in the long run.  And if you’re not in a country where you can get them refilled, it may be what makes SodaStream a workable idea for your boat.

The video on how to do it is below.  One thing that’s not mentioned in the video is that you need what’s called a “feeder tank” as the large tank (that’s a tank with a tube running down to the bottom of the tank from the valve at the top, so you get the liquid CO flowing) or you have to hang the large tank upside down so that the liquid will run through the hose.  It also works better if there is a temperature differential — when he’s venting the small tank initially, it’s chilling the small tank (same principle as a refrigerator and the expansion tube).

This video is a little less than 2 minutes long and is better than any other “refill” video I could find but (as noted above) misses a few points.

501 Shares
Some links above (including all Amazon links) are affiliate links, meaning that I earn from qualifying purchases. Learn more.