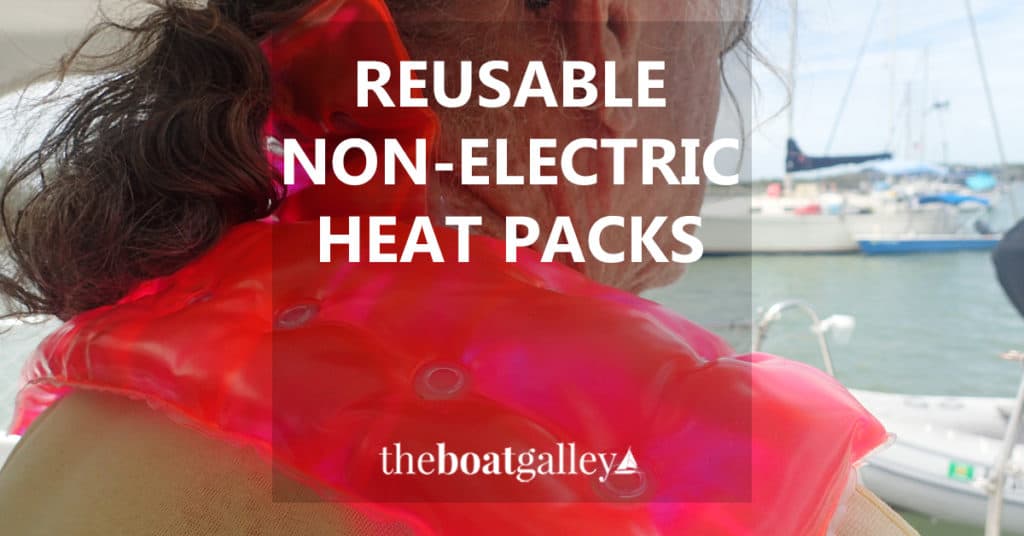 Aches, pains and chilly hands can accompany the cruising life. But what to do about them? Traditional heating pads generally aren’t convenient because of the power used (not to mention that it’s hard to move around if you’re plugged in). Microwavable heat packs aren’t possible if you don’t have a microwave — and even if you do, there’s the power usage. Single-use chemical heat packs aren’t environmentally friendly. Hot water bottles can leak and can be dangerous to fill in anything other than calm conditions. Plus, they’re hard to stick in a pocket to keep your hands warm.

I found a much better solution at the Annapolis Spring Sailboat Show: reusable nonelectric heating pads.

Dave had been having some aches in his hip and shoulder, so I bought a couple pads from the Click Heat guys. Dave absolutely loves them and so do several other friends we’ve shown them to in the month.

Click Heat’s US website now redirects to their European site and they’re no longer sold on Amazon, but friends have purchased similar heat packs from a couple of other Amazon vendors and been happy with them, so I’ll link to those at the bottom of this article.

The heat packs start out as a liquid, with a little metal disk inside. The disk is slightly conccave, and you “snap” it to bend in the opposite direction to activate the pack.

You’ll immediately notice it start to change color and become almost solid and hot, from the metal disk out.

The larger pads stay hot one to two hours, depending on the ambient temperature. The hand-warmer sized packs stay warm 30 to 45 minutes.

So how do you reuse them?

Boil water (sea water is fine if you’re short on fresh water) and drop a rag in, then the pack on top of the rag (the rag is there so that the heat pack doesn’t lie right on the hot pan). You can put several packs in together. You’ll see them change back to a liquid.

When it looks like they are fully liquid, with no crystals remaining, carefully remove them and hold up to the light to make sure there are no crystals (if there are, it will re-solidify in a couple minutes and you’ll have to re-boil).

Set aside and allow to cool. Store until needed again — they’re pretty tough but you do want to protect them from anything that would slice into them or put so much pressure on them that they’d pop. The heat packs can be reused over and over again.

You can also put them in the refrigerator to make a cool pack, but you cannot freeze them.

I’ve come up with a bunch of uses:

An ace bandage works well to hold one in place. The neck and shoulder ones are designed to lay over the shoulder and up the back of the neck. It feels positively decadent!

Since the brand that I bought is not available in the US, here are the ones that friends have bought and been happy with (they get generally good reviews, too):

379 Shares
Some links in this article (including all Amazon links) are affiliate links, meaning that we earn from qualifying purchases.