You are here: Home / Common Problems & Concerns / Rats! There’s a Mouse Onboard!! 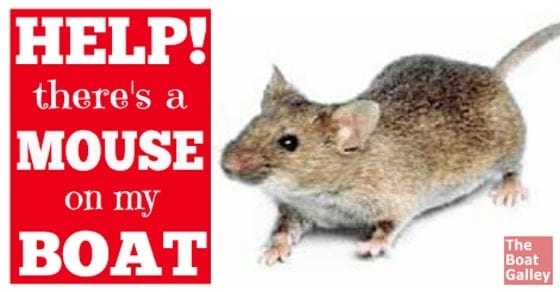 No one wants to have a mouse or rat on their boat.  Aside from carrying disease, they’ll get into food stores, possibly nest in cushions and mattresses, and even eat the insulation off wires, creating a fire hazard.

We were lucky and never had a rat or mouse aboard Que Tal.  But we had a few friends that had one come aboard.  And then yesterday, a reader contacted me for advice on ridding her boat of a “stowaway.”

So, combining what we know from friends and what Jackie told me, here are some tips.  Please add more in the comments if you can!

Getting Rid of Rats and Mice

Cat. If another boat in the anchorage or marina has a cat that’s a known “mouser,” see if you can borrow it for a few days.

A few words of wisdom on this:

1.  Not all cats are mousers.  Be sure to use one that is known to go after mice.

2.  To encourage it to look for the critter, don’t give it too much Cat Chow.

3.  Don’t be surprised if the cat makes a “present” of the mouse or rat carcass in an obvious place.

4.  The cat has to have access to the entire boat — don’t close off lockers, the lazarette, the bilge or “rooms.”  The mouse will try to find a place that it can go but the cat can’t — and mice can wiggle through openings as small as 1/4 inch!

5.  If someone aboard has a serious cat allergy, don’t do this!

Trap. There are lots of different styles of mouse and rat traps, all claiming to be the best.  The reality is that you’re stuck with what you can get your hands on quickly, and the bait seems to be more important than the style of trap (yes, some traps make it less messy to get rid of the critter once it’s caught/dead, but you’re a cruiser and can handle it!).

1.  Size the trap right — a mouse trap for mice; rat trap for a rat.  One that’s too large or small won’t get the critter you’re after.

2.  If you decide to use (or can only get) a “humane” trap (one that doesn’t kill the critter), think about where you’ll release it.  It had better be far, far away.

3.  Make sure that the bait is the only food available.  Double and triple check that all other food is in mouse- or rat-proof containers (generally metal with well-sealed lids).  Plastic bags and light-weight plastic bins are not mouse or rat proof.  If your oven has a latching door, you can store a lot of food in it that would otherwise not be in metal containers.

5.  For years, I’ve been told that peanut butter is much better as bait than the stereotypical cheese.  Supposedly, all mice and rats loved it!  Then yesterday Jackie reported that cruisers in the Rio Dulce, Guatemala, told her that mice there didn’t like peanut butter.  She used a bit of her “good cheese” and caught the mouse in less than a day.  If one bait doesn’t get results in 24 hours, I’d suggest switching — and check what the locals recommend.

6.  Place traps near the food they’ve been getting to, or in places where you’ve seen the mice or rats.  You want them to find it!

7.  Once you’ve caught or killed the critter, handle it carefully.  Mice and rats carry a number of diseases that you really don’t want to get, including bubonic plague and salmonella.  Spray it with a strong bleach solution, double-bag it, and dispose of it where kids and pets won’t accidentally get into the package.

Poison. Yes, you can use products like D-Con or locally available poisons.  I urge you to try the other options first, for two reasons:

1.  A poisoned mouse or rat isn’t going to leave the boat to die.  They are going to find some inaccessible corner and lie down.  In time, they will begin to decompose.  The boat will stink and you’ll have to play “find the stinky critter” and extract it from where it was . . . and then sanitize the area.

This is a nasty job.  I know.  Last year, our sailing club was given a pontoon boat to use as a race committee boat at a very good price.  The catch was that a possum had come aboard during the winter and died in the steering pedestal after tearing apart a lot of wiring in his efforts to find a way out (no poison in this case).  I was the one who cleaned up the putrified possum, the surrounding area and the wiring, then fixed the wiring. Trust me, it’s not something you want to do.  But it has to be done.

Should you ever have to clean up something like this, use rubber gloves, paper towels or rags that you can throw away (immediately after finishing the job), and a strong bleach solution — and take a good shower yourself afterward.  The water you use is worth it to avoid illness.

2.  If you have kids or pets aboard, it’s just not safe to use poison.  And with the motion of the boat, even at anchor, it’s easy to get poison in places you never intended.  This is another reason I just don’t like poison.

After You’ve Gotten Rid of the Critter

Once the critter is disposed of, you need to do several things:

1.  Clean up droppings. Okay, you probably did this as soon as you found them.  But now you need to go on a whole-boat scavenger hunt.  Sweep up any that you find (use rubber gloves and something you can throw away to scoop them up) and use bleach spray (make it twice as strong as you would otherwise) on the area after you’ve picked them up.  Mouse and rat droppings are very likely to carry salmonella, a potentially very serious food poisoning.

The New York State Department of Health recommends NOT vacuuming droppings as it can put possibly harmful dust in the air.  They recommend spraying first with the bleach solution, then sweeping into a plastic bag and double-sealing it.

2.  Throw away any food they’ve gotten into. You don’t want any diseases they could be carrying.  And if you’re lamenting the cost of your provisions, just think about the hospital and doctor bills — and possible evacuation to better medical facilities.  The food is cheap in comparison.

3.  Replace any bins with holes. Yeah, the critters are likely to have put holes in one or more of your food storage bins.  And with a hole in it, it won’t protect your food from other critters such as bugs or from dampness and humidity.  Make a list and replace them when possible.

4.  Check wiring. Carefully inspect all wiring on the boat to see if insulation has been chewed off.  If so, you’ll have to repair or replace it.

Pay particular attention to wiring in and near lockers with food and any others that have droppings in them.

Don’t skip this step — you do NOT want a fire aboard!

Dealing with the problem sooner rather than later is best — if you wait, there’s always a chance of babies and the problem multiplying.  Problems, no matter how nasty, don’t go away by themselves.  You really have to take not only swift action, but complete action to rid the boat of the critter and any consequences of it having been aboard.

358 Shares
Some links above (including all Amazon links) are affiliate links, meaning that I earn from qualifying purchases. Learn more.