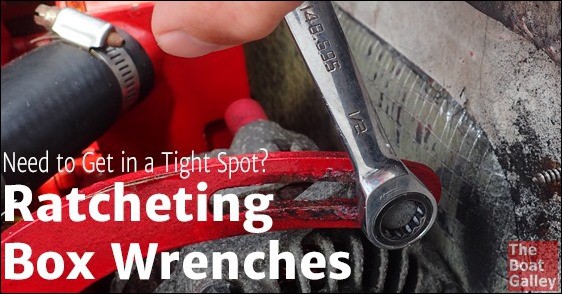 So many times, working on the boat means working in really tight places. There’s not much room to turn a wrench and not enough clearance for a socket.

That’s when Dave loves his ratcheting box wrenches. He got a set – or rather, two sets (metric and SAE) – several years before we bought Barefoot Gal and while they were handy living ashore, they’ve joined the ranks of “cherished tools” on the boat.

The ratcheting box wrenches will replace standard box wrenches, but admittedly won’t work for everything. You’ll still need a socket set with the extenders and universal joint that I wrote about here (to get to other “types” of hard to reach places) and open end wrenches for times when you can’t get a box or socket onto something.

Most tool companies make ratcheting box wrenches and almost any name brand will serve you well as long as it includes the sizes you need. Most boats will need a set starting at 1/4”; 3/4” at the upper end is good and is generally the largest in most sets. And yes, most boats need metric as well as SAE (inches) – it seems that almost every boat has some gear of each type.

You can get sets that have different sizes ratcheting boxes on both ends (called double box ratcheting wrenches) or on one end with the same size open-end wrench on the other. Dave likes the double ratcheting ones as we already own a set of open end wrenches, so he didn’t need more and, in his words, “it gives me twice the chance that I’m right in guessing what size the bolt is.” In other words, if you grab one wrench, you’ve got two sizes.

Dave’s (yes, I use them too, but for some reason all tools are “Dave’s” even though some are ones I had before I met him . . .) are GearWrench brand. One thing that is nice about the GearWrench brand as opposed to many others is that you just flip them over to go from “in” to “out” – there is no lever to flip and hence fewer parts and thus less chance of it breaking. They’re now about 7 years old and holding up well.

While he bought his when the local Sears was closing, you can get them on Amazon (shipping is free on most sets, even without Prime, so you don’t have to worry about the weight):

None of these sets come with cases. On our previous boat, Dave used tool rolls and now has snap-in wrench holders – red for metric, black for SAE. He likes the snap-in as being easy to just pull them out of his tool bag and take them all. Also, if you label the slots, it’s easy to see if you’ve missed putting a wrench away (and exactly what size is missing). Whatever you do, it’s a good idea to use different color cases or holders for SAE and metric – makes it much easier to quickly grab the right set!

GearWrench has also come out with a set of “FlexHead” ratcheting box wrenches where the head can sit at an angle to the handle. We do NOT have these so I can’t say how well they work from personal experience, but they look like a great idea! They are not inexpensive tools but could make a lot of jobs much easier. See them here – they get very good reviews but I’d love to hear from a reader who has used them.

NOTE: these sets do come with an organizer – and it’s different colors for SAE and metric!

448 Shares
Some links above (including all Amazon links) are affiliate links, meaning that I earn from qualifying purchases. Learn more.