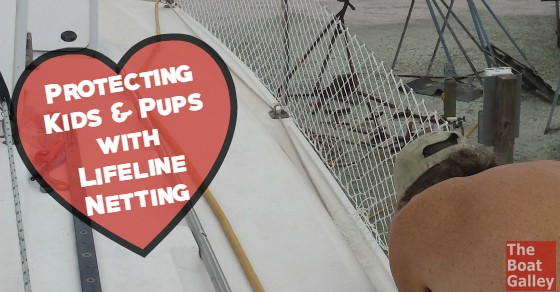 See a boat with netting on the lifelines and it’s a pretty safe bet that there are either kids or dogs aboard.

Of course, netting can’t protect against all overboard accidents, but it does provide an additional layer of safety (not to mention keeping toys and tools on board).

And so after we replaced our lifelines this summer, one of the next jobs was to put netting on to protect our little 7-pound ball of fluff, Paz.

Putting netting on the lifelines is one of those jobs that looks like it’ll be easy . . . until you start doing it. It just takes more time than you expect and you have to contort your body more ways than you ever dreamed on the side decks. Consequently, even though we’d bought the netting a year ago, we decided to wait and put the netting on after replacing the lifelines so that we wouldn’t have to do it twice.

If it’s your first time doing netting, there will be places on the boat where you just can’t put it. For us, the bow is one of those places because of how the genoa furler runs and the cleats for the anchor bridle (or dock lines). But the side decks are our big worry — they are fairly narrow and there’s no gunwale. At anchor, Paz’s “bathroom carpet” is on the front deck, and she goes up there on her own when the need arises (underway, one of us takes her on her leash).

I always worry that she could slide right under the lifelines and we’d never know it. And I think she finds the side deck a little scary too as she rarely walks down it, prefering instead to go over the cabin top . . . where I know she could also fall and slide under the lifelines, but it apparently hasn’t dawned on her.

While I can never say with certainty that I know what she’s thinking, it certainly seems that Paz likes the extra safety of the netting. Yesterday Dave got it pretty well strung on the starboard side of the boat (there’s still parts to finish up) and I was amazed to see Paz walk up and down the side deck numerous times last night and this morning — she almost never did before! Makes me feel much better than having her walk over the coach house roof.

The side deck without the netting (left) and now with (right) — a big difference for Paz and for us! (Note: Dave has not yet re-strung the lower lifeline in the photo on the right. That’s today’s job.)

There are two basic ways to attach the netting: pass the lifelines through it or attach it with cable ties or line. Dave prefers to pass the lifelines through the top and middle, and then uses cable ties where it attaches to stainless tubing (ends and a bit of the top) and line at the bottom (this 1/8″ line from West Marine is great for this).. Anywhere that you’ve used cable ties you’ll need to periodically check as they will break from UV damage (even the ones with UV protectant).

How long it takes to put it up depends a lot on how big your boat is, the configuration of the lifelines and the space you have to work in. Barefoot Gal‘s side decks are just a pain to work on as they’re narrow. We can only work about so many hours a day in such twisted positions! Dave is working on this while I’m doing some other stuff, and it’s going to take him the better part of three days.

Many marine stores sell lifeline netting and prices vary considerably. The least expensive that I found for high quality netting is Seattle Marine, also known as SeaMar. At 60¢ – 80¢ a foot collapsed length (it shrinks by 20-35% when you pull it to its full height), it’s about one-quarter the price of many other brands, plus has double strands top and bottom for longer life (we used this same netting on our previous boat). Expect high quality netting to last 5 to 7 years in tropical sun; more in temperate latitudes.

Shipping from Seamar is a little slow, with it tending to go out 5 days after you order, so plan accordingly. You can call and request that it go out faster — also note that they are located in Seattle and if you opt for ground shipping it can take 5 to 7 days to reach Florida from when it leaves the warehouse.

Note that once you choose the height netting you need, the next page tells you how to figure how much you need as the diamonds open up.

So show the kids and dogs how much you love them . . . put netting on the lifelines!

381 Shares
Some links above (including all Amazon links) are affiliate links, meaning that I earn from qualifying purchases. Learn more.