You are here: Home / Podcasts / On Watch 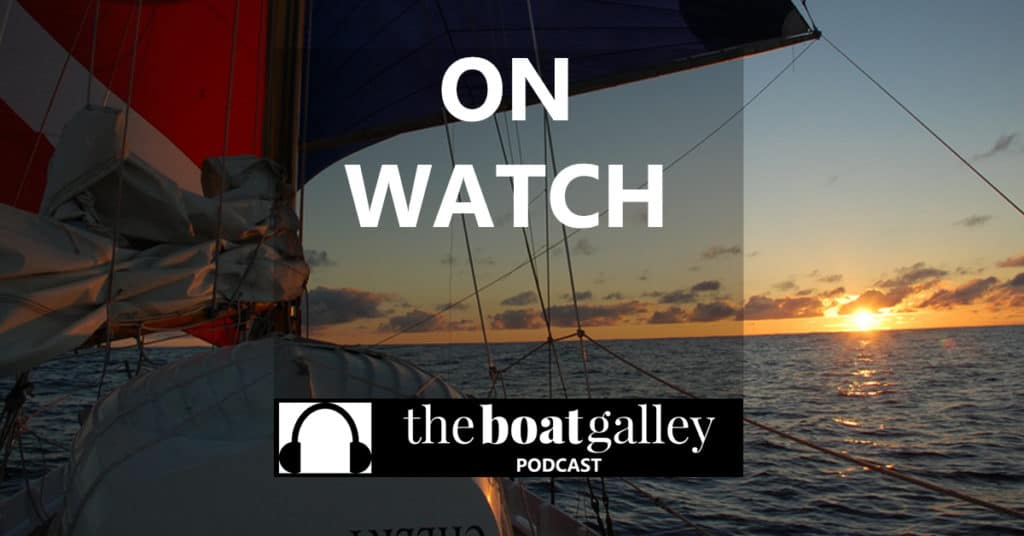 What’s it like to actually be at sea? Three-time circumnavigator Lin Pardey shares 4 vignettes from times on watch.

Prefer to read? See the transcript below.

“The paddock oak came cracking down a few minutes before 5 a.m., the rending, whickering snack of heavy timber rocketing her from sleep . . .”

I glanced over the top of the book at our compass and then around the horizon. Still on course, no ships in sight. I rejoined Henrietta as she heard a knock on the kitchen door. Eight pages later I glanced up again. The mainsail and genoa glowed fuchsia as the sun sank slowly to kiss the horizon. The warm following wind caressed the hairs that had struggled loose from my braids and made them tickle my cheeks the same way the little white horses tried to tickle Seraffyn’s transom.

Our taffrail log hummed softly just behind me. I glanced to port where 5 miles away the revolution-torn hills of Portugal were just starting to release the full moon. Three thousand miles to starboard my family and friends were fighting the fears of inflation, unemployment, and mortgages. Fifteen feet from where I sat my watch Larry lay sleeping, secure in the knowledge that our boat was strong and I was well able to handle most emergencies.

To port the moon showed its pink bald pate, to starboard the sun shot its last rays through the clouds. Ahead lay adventure, behind, our self-steering vane controlled an ever-unraveling, bubbling wake. I returned to Henrietta as the stormy night burst through her kitchen door.

I was glad to come on watch when Larry called. It was warm, I needed only a light sweater and pair of shorts. The velvet black sky twinkled with stars. A light breeze kept us whispering along about 3 knots, close-hauled. Cabo Blanco, 6 miles off and abaft our beam, flashed its light two times every ten seconds. I leaned back against the boom gallows and listened to the sounds Larry made as he climbed into the bunk.

One hour later I heard a new sound. I thought it was a lone porpoise coming to investigate us. Regularly I heard it blow, coming closer and closer from behind.

Suddenly the moonlight glistened off an enormous black whale 20 feet from our quarter. Seraffyn is 24 feet long. That whale looked twice our size.

I ran to the companionway. ‘Larry, come up quickly,” I whispered urgently. He emerged seconds later rubbing his eyes, “My watch already?”

“Why did you wake me for something as silly as . . . . OH MY GOD!” Larry exclaimed as that giant expanse of black flesh arced slowly, inexorably out of the water 10 feet away from our beam.

“Lin, turn on the radio real loud,” Larry suggested, ‘Maybe the noise will drive him away.” I did.

We stamped on the deck and shouted. We blew the foghorn. But regularly, every two minutes, the whale surfaced beside us saluting us with the overwhelming odor of his rotten breath.

“We’ll come about,” Larry said as he unclutched the windvane. “Maybe he’ll just keep going.” We settled Seraffyn on the other tack and headed dead off the Costa Rican shore. I steered as Larry watched for our unwelcome companion. The sound of his blowing told us our friend wasn’t at all interested in us. He was headed south, no detours intended.

As the sound of his blowing grew fainter, we tacked and Larry set the windvane for our original course. “I’m for a stiff drink. How about you? Then do you mind if I take the rest of my off-watch?”

Larry woke me gently, “Your watch, Lin. We’re becalmed again. I got a fix off the lights on Berlenga and Peniche. But it’s misted over now.”

I climbed reluctantly out of our warm sleeping bag. Larry handed me my shirt and gave me a hug, then disappeared into the forepeak. I pulled on my boots and jacket and set some water to boil, then went on deck.

The huge blue and white drifter hung limply on its whisker pole. The last wind must have been from aft. Two days now we’d had these shifting, sporadic winds. With 15 miles to go we had no wind and little visibility. I went below and poured a cup of tea. Then I opened the almanac to see when the sun would rise. One more hour to wait.

I heard the foghorn of a ship passing nearby. I stood on deck and soon saw its lights as it came into view about a mile away. Visibility wasn’t too bad.

I felt a light southerly breeze as I sat sipping my tea in the cockpit. “Should I or shouldn’t I,” I debated, staring at the 16-foot whisker pole. I waited five minutes more. Then I started. Very quietly I lowered the whisker pole topping lift. I undipped the pole and slid it carefully along the deck. I dropped the drifter and stored it below. Finally, I stored the spinnaker pole on its brackets along the bowsprit.

The sun just began to brighten the sky. Seraffyn began to trickle slowly through the water. I caught sight of the lights of Peniche and Berlenga and took bearings. Rushing below I checked our position. We had a good margin of safety now in the 6-mile-wide channel. I went outside to make one last check before waking Larry.

“Your watch, Larry,” I said feeling a bit disappointed. “We’re becalmed again. I got a fix off Berlenga and Peniche but it’s misted over now.”

As I crawled into my sweater Larry poured himself a glass of rum. “Remember what Pedro said when we left El Capitan? ‘Get south of Cabo San Vicente before November and you’ll miss winter.’ From the look of things he sure seems right.”

I pulled on my favorite yellow sea boots, not because it looked wet on deck, but because they kept my feet so cuddly. Larry snuggled into the still warm sleeping bag.

I glanced around deck, no ships in sight, calm sea, sails pulling well. I went below and got the book I’d been reading on my first watch. Before I’d read a chapter, Seraffyn heeled sharply to a gust of wind.

I went on deck and another gust heeled us till the scuppers ran with foam. Dropping the mainsail eased our heeling, but I stayed on deck watching the genoa pull us at over 5 knots. I strolled forward just ahead of a burst of spray. For some reason, that spray made my decision. I took two gaskets from the deck locker and then dropped the genoa, controlling it with the downhaul Larry had rigged for occasions just like this. Then I eased out on the bowsprit and lashed the sail down.

Resetting the mainsail got us moving, but it wasn’t quite enough canvas so I pulled the staysail from its bag and up it went. The sound of the sheet winch must have awakened Larry. “Why aren’t you wearing wet weather gear?” he growled at me from his sleeping bag.

I cleated the staysail sheet and growled back at him, “Because there wasn’t a drop of water on deck two minutes ago. Go back to sleep.”

I went below and dragged out my wet weather pants just in case. As soon as I’d struggled into them I went on deck to see a flash of lightning to windward. ‘Damn,” I said to myself, “better get that genoa off the bowsprit.” I banged my toe on the forehatch, then slid on my rear out the bowsprit, glad of my wet weather pants. I had most of the jib hanks off when I heard Larry’s imperious shout, “What the hell are you doing out on the bowsprit at night alone without a safety harness and the boat doing over 5 knots.”

Furiously I yelled back to him, “Taking the bloody jib off the headstay,” as I slithered on deck with the unruly mass of Dacron.

“You’d better put a reef in the mainsail,” Larry snarled as he ducked below just ahead of a good dollop of spray. “And put your wet gear on now! Dammit!”

I bagged the genoa, eased the main halyard, ripping a nail off in the process, and pulled the reefing pennants. Nothing happened. I looked aloft. Nothing fouled up there. Then I went aft to get a flashlight. A fine mist of spray burst over Seraffyn’s side, effectively wetting me down. I lit the light and found the reefing outhaul line staring happily at me from where it had hooked itself round the cockpit locker latch. I cleared it and pulled the reef into the sail, sheeted in, checked our course, then rushed below for my wet weather jacket.

Back on deck I started tying the reef points into the forward part of the mainsail, clinging to the boom with my chin and getting furious as our motion became worse. I had four reef points to go when I heard the ship’s bell ring six times—3 a.m. Larry’s turn, thank God!

I called to Larry as I came below, dripping salt water. I began stripping down, reciting the tale of my watch’s woes. When I was down to socks and sweater Larry slowly climbed out of the bunk. He smiled at my exasperation and said, “Sail changing sure helps your watch go fast, doesn’t it?”