You are here: Home / Common Problems & Concerns / No Natz 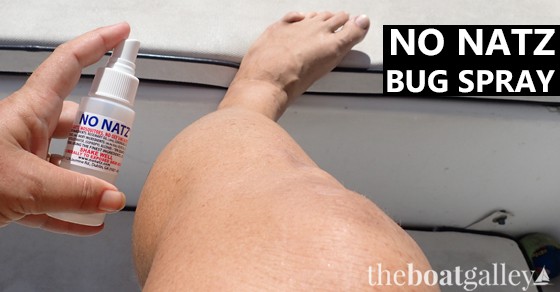 Gnats. No-see-ums. Mosquitoes. We’ve got them all in the Florida Keys for about 9 months of the year.

I don’t like to use sprays with DEET, as (1) they are hard on the skin, (2) can ruin many plastics (read about this), and (3) we have the world’s lickingest dog and it’s not good for her to lick it off my skin.

So I’ve made some homemade sprays — they were better than anything else I’d tried short of DEET — and just lived with the bites I did get.

Then, a few weeks ago, we went to see a movie in the city park next to the marina. Sitting in chairs on the grass, my shins and ankles got just covered in bites.

Coincidentally, the next day Dave was at the local hardware store and saw little spray bottles of something called No Natz. People ahead of him in line were talking about it and saying how good it was, so he bought a bottle.

Last week, we were anchored out on the north side of Bahia Honda in the Florida Keys. It’s a wonderful anchorage for dog Paz, with sandbars that appear at low tide. Dark skies for stargazing (read more). And a shoreline covered in mangroves and filled with various biting bugs. If there’s a breeze, it keeps the bugs away.

Our third night there, there was just no wind. The bugs swarmed. And so I pulled out my new bottle of No Natz and started spraying.

I was seriously impressed. I’m not going to say that I had zero bites, as I did get a few. But very few. And that was without lighting any bug coils or candles (I always worry about fire with those).

Since then, back in the harbor, we’ve had a few more windless nights and No Natz has continued to work well.

It’s all natural — rosemary, lemongrass, and geranium essential oils — in an olive and coconut oil base with water, lecithin and rubbing alcohol. The company says it’s safe for pets but you should check with their doctor before using on pregnant women or infants. It has not left greasy marks on any of my clothes or the furniture and it even smells nice.

It is supposedly also good at repelling chiggers and biting flies. We haven’t had either of those problems here, so I can’t give my personal experience on them.

I had never seen No Natz until Dave brought it home, but it’s available on Amazon. The larger bottles are definitely a better buy.

I recently discovered that the company also makes a product called No Mosquitoz that includes citronella oil to repel skeeters. I haven’t tried it yet as we’re not having a problem with them yet, but I have ordered a bottle in case we have to tie into the mangroves for a hurricane (mosquitoes can be a huge problem if you’re trying into mangroves).

926 Shares
Some links above (including all Amazon links) are affiliate links, meaning that I earn from qualifying purchases. Learn more.