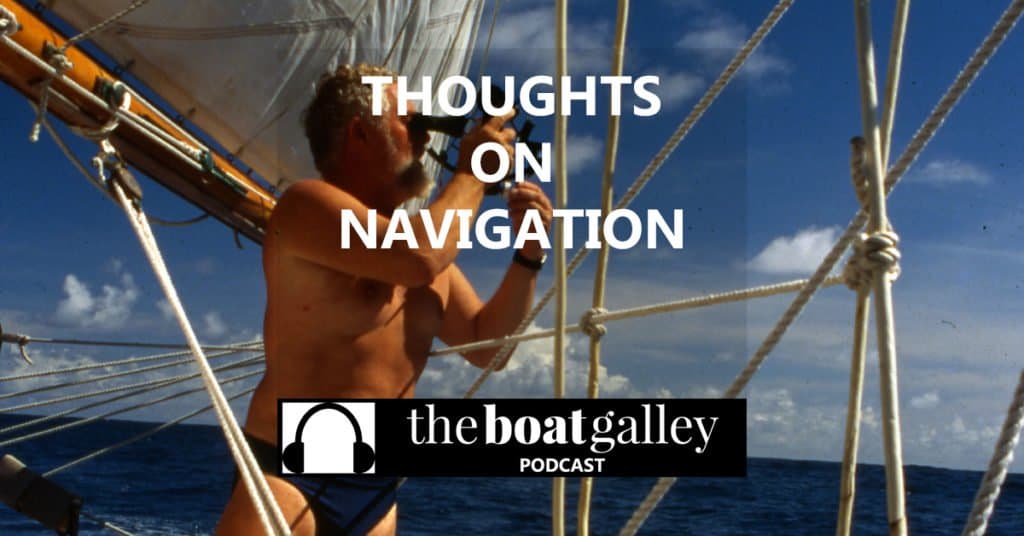 Modern navigation equipment has made cruising so much easier, but has it made it safer? Lin Pardey ponders on exactly this as she describes how, after sailing more than 190,000 miles using traditional navigation, i.e. a sextant and stopwatch plus hand-bearing compass, she and Larry sail through the Line Islands using GPS.

Drinking/wine glasses for the boat (Amazon)

Get all 5 Pardey Offshore cruising videos for one low price

Prefer to read? Transcript below

Sponsor: Solavore Solar Ovens. Cook with the power of the sun with your Solavore Sport solar oven. Slow-cook, roast, or bake, the lightweight and durable Solavore is perfect for life on board. Keep the galley cool and save fuel too! Use coupon code Galley2018 for 15% off through September 2018.

When we left Southern California bound for New Zealand, we decided to head for Penryn Atoll after leaving Kiritimati. Though we knew we would have to stay on a very close reach for 800 miles, we expected it would be worth the effort as it is just far enough off the direct route between the Polynesian Islands and Samoas, that relatively few cruisers visit, so the islanders would probably enjoy company. The tradewinds were blowing freshly, almost 25 knots most of the time.

But 7 days later, as we approached Penryn, they lightened to less than ten knots and our speed dropped from 6.5 to 5 knots. That meant approaching a low lying atoll after dark.  As the currents were definitely setting due west, and as our approach was on a beam reach from the north we decided to stand in towards the atoll and heave to within about five miles of it because we knew we would be swept down current,  to the west and not onto the reef, if things went wrong.

Just before dusk we could see the atoll – it has trees that tower far above the normal tropical island trees.  We could clearly make out the separate islets and the passes between them.  We continued slightly closer as dark fell, then the most wondrous full moon came out and, since there were absolutely no dangers in the approach to an anchorage that lay just outside the main entrance to the lagoon, and since we could always just turn and reach back out if we felt uncomfortable, we decided to head for it.

What a glorious sail, I used our good binoculars (Fujinons with coated lens) and found I could even see the details of trees along with the gentle break of surf on the edge of the atoll, I took cross bearings with the handbearing compass to be sure we were giving the reef  enough clearance. We sounded our way towards the anchorage which is just to leeward of a tiny sandy patch topped by a few palm trees and about 200 yards from the actual reef. When my leadline touched bottom at 50 feet we set the anchor and had late night drinks together in the moon lit cockpit.

Then I got out our handheld GPS to see how accurate it was.  Interestingly it seemed to indicate we were within a few feet of the position we’d confirmed with our handbearing compass. This definitely had not been the case at Kiritimati where the GPS fix put us firmly on top of the atoll.

This is the very first voyage we have made using GPS. We bought two $100 Garmin handhelds. We continued to take sextant sights and friends who perused our logbook had a laugh when they read “took round of sights to confirm GPS position.”

After about 190,000 miles of sailing without GPS, what was our reaction? Disappointment in some ways. We missed the special routine navigating with a sextant creates, the fun of trying to guess our days run before Larry plotted the daily noon sight. We missed the reason to be out on deck waiting to catch the sun and also the mind exercise, and most of all I missed the anticipation, the special joy of seeing an island or headland come clear on the horizon just when we (fingers crossed at times) expected it to.

On the other hand we appreciated the almost instant warning that there was a very strong current setting to the northwest when we were 100 miles out as we were approaching Kiritimati. It let us alter course early so instead of running wing and wing we went onto a reach and lay into the island without ever having to go to windward.  Did the GPS make us feel safer?  No, it did the opposite, because we had to remind ourselves that it could lure us into going into places at night or giving ourselves less clearance when passing headlands or reefs because it appeared to be so accurate.

But back to Penryn – sadly we never went ashore.  By morning the tradewinds had freshened to almost 30 knots.  We could see over the reef and into the anchorage we would have to use to clear customs and immigration. It is in front of the village on the leeward side of a five mile wide atoll. It was a mass of white caps and 3 foot seas. Definitely not a place to lie at anchor.

“Let’s wait a day and see if things calm down,” Larry suggested.  That afternoon two open boats motored out to where we lay anchored. One held the local pastor and his son out for an evening of line fishing, the other, a group of men on their way to dive along the outside edge of the reef. They all came alongside and urged us to sail in and join their community for a while. But they also said they had had difficulty launching their boats inside the lagoon that day.

Their warm welcome, the fact that they each came by a few hours later to offer us fresh fish they’d caught, convinced us to stay an extra day just in case.  But when the winds increased even more the next day, accompanied by heavy rain squalls our previously comfortable anchorage began to fill with a heavy cross swell. The inside of the lagoon began to look like a washing machine gone wild so we decided to sail onwards towards Apia in Samoa.

Though I was disappointed in my desire to share time with these Cook Islanders, I was also ready for a change of pace, a chance to be in a truly calm anchorage, the promise of lots of places to eat out, telephone and internet contact, Laundromats and a variety of fresh vegetables, plus a chance to have our mail catch up with us.

238 Shares
Some links in this article (including all Amazon links) are affiliate links, meaning that we earn from qualifying purchases.