You are here: Home / Podcasts / Magic in Choosing a Better Anchorage 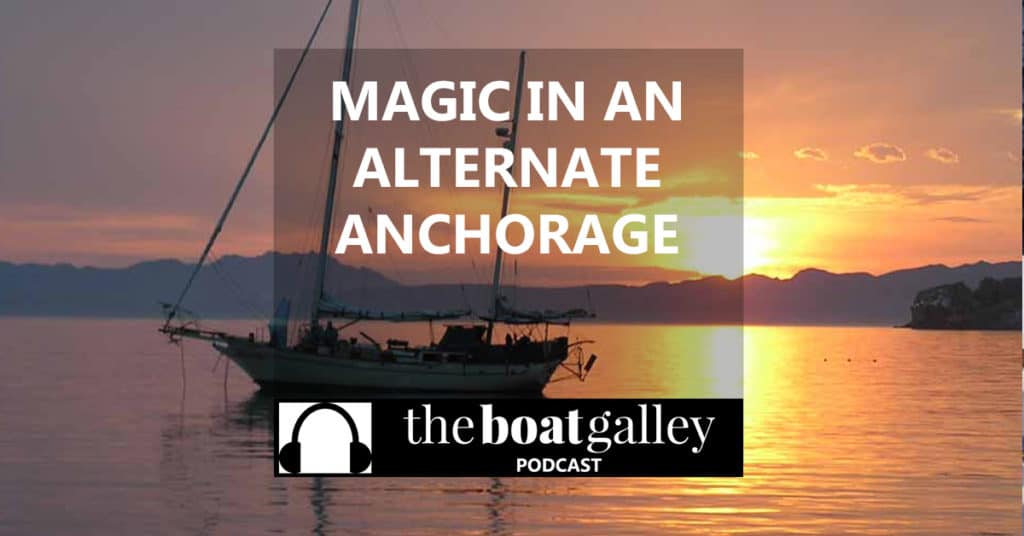 Learn why Lin Pardey feels flexibility was the key to some of her best cruising experiences. Join her and Larry as they decide to abandon the anchorage of their first choice and gain some real rewards.

Cruising Has No Limits DVD (Amazon)

Prefer to read? See transcript below.

Sponsor: Marmara Imports. Their hand loomed, fair trade, organic cotton Turkish towels are highly absorbent, dry quickly, fold flat and are soft and luxurious: perfect for life aboard!  Use coupon code Podcast10 for 10% off any order of $40 or more. Marmaraimports.com: more than a towel.

March, April, I call them the migration months. This is the time of year when cruising sailors decide to explore the waters around New Zealand before heading off for northern (warmer) climates. We have had almost a dozen people from five countries drop anchor here at Kawau, then row ashore to say hello. The crews from two boats, one British, the other French, sitting on our deck last week, sharing wine and wonderful sailing stories when another overseas yacht came sailing slowly around the headland, American flag snapping in the breeze, tanbark colored sails above a creamy yellow hull making the double ender stand out from all the white boats surrounding her. She looked familiar, then as she anchored close in, I recognized two sailors we’d first encountered near Atuona, Hiva Oa when we sailed into the Marquesas from Chile after 31 days at sea.

Our passage had contained a mixed bag of winds, fresh running winds for a few days as we rode the Peruvian Current north, then very light changeable breezes as we searched for the trades, then two weeks of a romping run driven by 25-knot winds. We’d planned on clearing in to Atuona. I was ready for a restaurant dinner, lots of fresh food, a few nights sharing a bunk with Larry and no watches to stand. But even before we spotted the breakwater at about 1700 hours Larry was dubious. “I’ve looked at the chart and with these big SE tradewind swells, and the steep cliffs around the harbor, I don’t think we’ll get a good nights sleep in there.” I was determined to be at anchor that night. But when we got close, I looked through the binoculars and soon agreed with him. The masts of the dozen or so yachts anchored behind Atuona’s short breakwater were describing 30 degree arcs as swells wrapped around the breakwater to collide with waves refracted from the surrounding headlands. “Let’s just sail on to Nuka Hiva. We can clear in there,” Larry suggested. But I got out a Charlies Charts for the Marquesas then stated, “There’s a bay that looks like it might be okay on the back side of Tahuata. Five miles or so. No lights, but if we get lucky we could be there before nightfall.”

Of course now, instead of running, we had to turn and face 25-knot tradewinds and 5-meter seas to beat clear of the headlands surrounding Atuona. So five miles became more like seven or eight and daylight was fading quickly as we finally eased sheets to run through the passage between Hiva Oa and Tahuata. The sudden onset of dark, typical in the tropics, caught us just as I spotted half a dozen yachts clustered beneath the distinctive spire of rock at the head of the bay I’d chosen. “No dangers if we keep clear of the headlands. Let’s try tacking in and get the hook down for the night,” Larry suggested. Just then someone on the outermost yacht lit an anchor light, the only light we could see from our position a mile offshore. Guided by that single light and the outline of the spire against the stars which were slowly filling the night sky, we beat in, found bottom in about 5 fathoms and were just getting ready to let go the anchor when a voice rang out, “Congratulations on completing another circumnavigation.” I hadn’t thought of it myself, but yes – after 18 years of wandering we’d just crossed our outbound track. With this heartwarming thought, I headed below to prepare dinner.

A few minutes later Robyn Robin and Mark Bennett from the 38 foot Aitken’s ketch Mintaka, accompanied by their 8-year-old son Eitan rowed alongside to hand us some fresh tomatoes and half a cabbage. “Need any fresh water?” Mark asked, “our watermaker really pumps it out.” I handed over some jugs. When Mark and Robyn returned with 20 gallons of sweet water Larry handed them a bottle of nice Chilean Red Wine. “Almost biblical isn’t this,” Mark commented, “Turning water into wine.”

Many miles and many years later, we got out another bottle of red wine as Mark and Robyn rowed ashore to join us on the deck of our home base. “No water for you this time,” Mark quipped. But they did bring shared memories of our Marquesan encounter and others we’ve had through the years.  And what about Eitan, the lovely young son they’d raised on board for most of his young life? He went on to gain a degree in IT from a fine university and at 22 is working as a programmer for Amazon. His parents shared some observations Eitan had on his transition from being a boat kid to mainland college kid.   “He was surprised to learn you can’t be completely open about yourself like you can when you are around other boat kids,” Mark told us. “He learned that in real life you have to keep things closer to your chest. He also found out kids who smoke a bit of dope can be good guys too.”

We were again reminded that friendships made afloat tend to last. Even after a year or three or five apart, conversations between like-minded voyagers tend to carry on as if we’d last seen each other only a week or two before. One of the very first articles I ever had published was called People, the Bonus of Cruising. The visitors we have during the migration months definitely bear this out.

173 Shares
Some links in this article (including all Amazon links) are affiliate links, meaning that we earn from qualifying purchases.