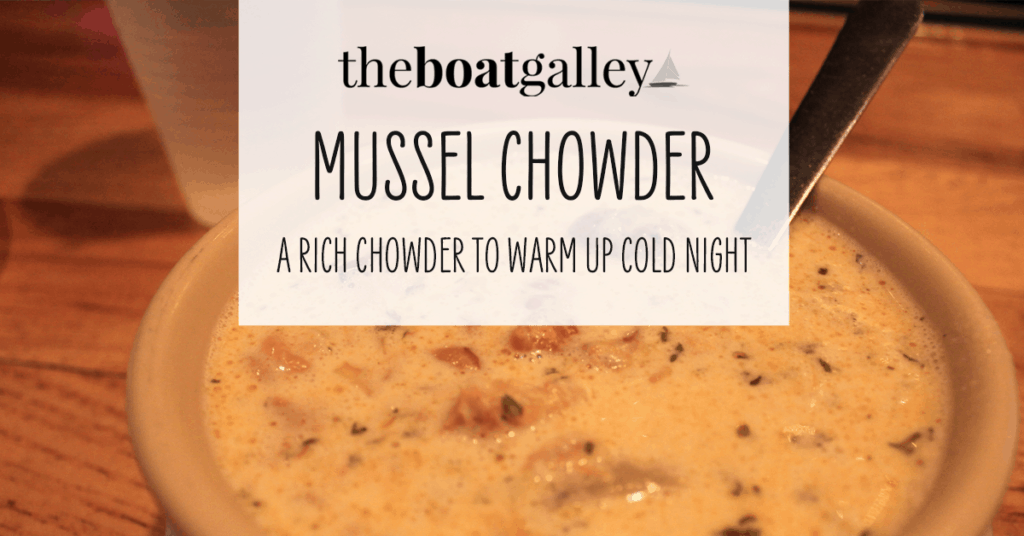 This is a guest post from Lin Pardey, author of many cruising books and DVDs including The Care and Feeding of Sailing Crew, now in its fourth edition.  She and her husband Larry have sailed over 185,000 miles in two boats they’ve built themselves.  Unfortunately, Larry died in July 2020, after a 5-year battle with Parkinson’s and a massive stroke in 2019. Their website contains lots of cruising tips — and you can sign up for their free e-newsletter. Lin continues to cruise and we share a booth at the Annapolis Sailboat Show.

From the first time I found that cockles, mussels and clams don’t bite, I grew to love scavenging for these tasty morsels as we explored out of the way anchorages. I grew to love the chowders I could make with them using very simple ingredients I always had on board, even if we’d been far away from provisioning ports for a month or more. But until I found the following recipe, mussels were my least favorite choice.

About a month ago, Larry and I found ourselves in Dargaville, a small port town on the west side of New Zealand’s north coast. I asked two folks which cafe in town was the best. Both, without a moments hesitation said, “Blah Blah Blah” without hesitating.  They pointed across the street and I realized that was the name of the cafe. Kumara and mussel soup (Kumara is a local sweet potato) sounded too interesting to pass up. If you try the following recipe you’ll probably agree.

Note from Carolyn — I made this using US-style sweet potatoes and clams for Dave (I’m allergic to clams and mussels; no mussels around here).  Even with the substitutions, Dave thought it was fantastic and I loved my new “potato chowder”  (I removed half as my portion before adding the clams).  So even if you don’t have all the local ingredients, try it anyway! Dairy-Free Alternative – Substitute coconut milk for milk.
Nutrition Facts
Lin Pardey's Mussel Chowder
Amount Per Serving
Calories 593 Calories from Fat 297
% Daily Value*
Fat 33g51%
Saturated Fat 16g80%
Cholesterol 85mg28%
Sodium 1002mg42%
Potassium 1413mg40%
Carbohydrates 56g19%
Fiber 7g28%
Sugar 14g16%
Protein 18g36%
Vitamin A 19245IU385%
Vitamin C 32.3mg39%
Calcium 246mg25%
Iron 6.9mg38%
* Percent Daily Values are based on a 2000 calorie diet.