Cruising seems like an idyllic life . . . permanent vacation, right? Ask anyone who’s done it though, and they say it’s nothing of the sort.

It can get stressful at times, with being on the move, maintaining the boat, doing all the “normal” stuff such as going to the grocery store, fixing meals, cleaning and doing laundry, as well as preparing for the next day on the move. When are we supposed to have fun?

For Dave and I, three things really help lessen the stress:

Admittedly, sometimes weather or other factors don’t make these possible. And sometimes we have several “in transit” days in a row. But as a general rule? Absolutely. These three things have made our cruising much more enjoyable.

And you might note that they all are based on lessening time pressure. For us, time is one of the biggest stressors there is, even more so than money.

Slowing down means that we don’t try to pack so much into each day that we’re exhausted. If it takes us an extra day or two to do things in town at a reasonable pace – and enjoy the town – so be it. Working from sun up to sundown day after day is a sure recipe for hating the boat and hating cruising. Yes, some days it may be necessary. But not every day.

We’ve learned that it’s equally counterproductive to run around madly trying to see the sights. It’s easy to get into the “check items off” mindset, but we now will either stay somewhere longer to see everything we want to at a pace that lets us enjoy what we’re seeing, or just admit that we can’t see or do everything and pick the things that most appeal to us.

If staying longer means we miss “our” weather window, there will be another one. That’s one of the real advantages to cruising as a lifestyle and not just as a vacation.

We’ve learned that starting out a trip – even just a 20-mile jump – with both of us well-rested means that we’re in a better mood, having fun on the journey and are much better at dealing with anything that comes up along the way – weather, mechanical or navigational issues.

And that brings the second piece of the equation into focus – we try to have everything on the boat ready the night before we intend to leave. Any bigger repairs or maintenance, we start work on shortly after we arrive somewhere, and want to have it done at least a day before we leave. Unless we’re planning a very short next step, we try hard not to have to do any “last morning” things ashore or picking something up. Knowing that everything is ready to go when we go to bed the night before, we’ve found, makes us both a lot calmer.

And we try not to leave too much for even the last day. Anything that can be done in advance, we do. Specifically, we’ll fuel up several days in advance, plot the route and go over it together (taking our time in planning and plotting the route also makes for fewer errors and less stress). Laundry will get done and provisions/supplies bought. Then the day before we’re leaving I’ll make any food we want to eat underway (usually some breakfast bread or muffins and something for lunch; maybe prep some fruit to eat underway) while Dave does the engine checks, and together we’ll top up the water tanks if necessary, put the dinghy engine on the stern rail and hoist the dinghy usually before dinner.

If there are any problems – such as recently when the dinghy motor’s tilt lock had a problem and the motor tilted up just a couple inches every time we put it on the stern rail (which then made the dinghy rub on it) – there is time to straighten things out without time pressure. Funny how it’s much easier to figure out a problem when you know you have time!

We’re not up past midnight trying to hurriedly fix something . . . which can result both in mistakes being made and also a distinct lack of sleep. We’re also not still trying to get ready in the morning . . . and seeing our desired departure time slipping by. And if the day-before prep reveals problems, we can decide to stay another day . . . or several.

Finally, within the confines of tides, bridge or lock openings and so on, we try to leave as early as possible (assuming a one-day trip; overnight trips we may start later so that we arrive in daylight). On longer trips – 40 or 50 miles – we usually start pulling the anchor just before sunrise. Shorter trips we start just after breakfast.

Once again, giving ourselves plenty of time to reach our destination means that if there’s any problem, we have time to deal with it without risking coming into an anchorage or marina after dark. Maybe it’s something like slowing down to let a squall pass in front of us, maybe it’s stronger than expected current slowing us down. More than once we’ve had engine problems that forced us to sail in very light winds. If we’re not stressing about time, we deal with the issue much better and don’t take chances.

After all, cruising is supposed to be fun! 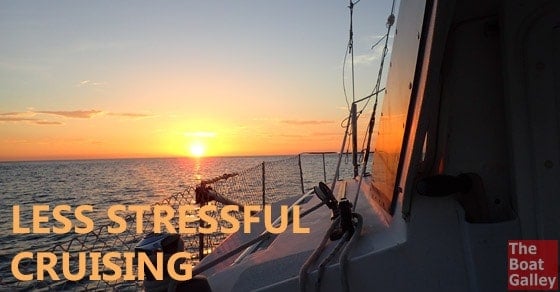 359 Shares
Some links above (including all Amazon links) are affiliate links, meaning that I earn from qualifying purchases. Learn more.

Don’t despair because the boat has a tiny refrigerator! Tips for going two weeks or more between grocery stores -it’s easier than you think! [More] Living with a Small Refrigerator

When cruising or living on your boat you want to be sure you have enough solar power for your needs. Learn the best way to figure it out. [More] How Much Solar Power Does Your Boat Need?