You are here: Home / Zon / Keurig Mini Plus and Desk Pro 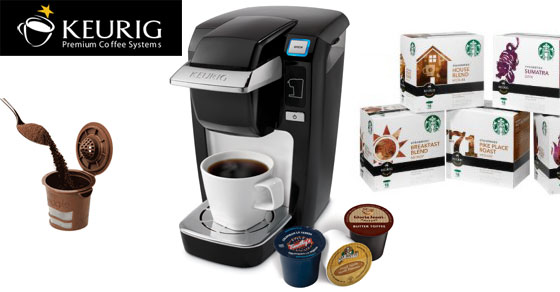 I’ve gotten some questions about a Keurig brewer as well as hearing from a couple of people who are using them and loving them.

We were given a slightly larger one than what I’d use on a boat a couple of weeks ago as an early Christmas present, so I have some experience with them and will — of course — give my thoughts.

For those who aren’t familiar with Keurig brewers, they are single serve electric coffee makers.  A small pod of ground coffee (or the makings for another drink) is placed in the machine and it works like a mini drip coffee maker.  On some models, you can select one of three cup sizes — 6, 8 or 10 ounces; others have just one or two cup sizes.

Both for size and power reasons, the Keurig Mini Plus  or Desk Pro are what most boaters are looking at and what I’ll talk about here (mine is a different model but most of the pros and cons are the same).  Neither of these has a large water reservoir; you put water in each time you use it.

I’ll admit to being torn about whether I like the Keurigs or not.  One thing that I will say is that I don’t think that it automatically makes a better cup of coffee than any other method.  If you’ve been using a mass market brand of coffee — say Maxwell House or Folger’s — and switch to a premium coffee pod, you’ll notice a big difference.  But you’d also notice a difference if you used the same method of making coffee and switched to a premium coffee.  And if you use the same mass market brand in a refillable pod, it’ll taste about like it did with your old coffee maker.

Probably the best thing to say is that I don’t dislike them — they have a number of good points — and they can work well on a boat, particularly if you are mostly in marinas with shore power and cruise in generally protected waters.  I’m just not sure if it’s worth the cost.

Mini Plus, Desk Pro or some other model?  The Mini Plus takes 1425 watts, so you’ll need to run it off at least a 1500 watt inverter and a 2000 watt one would be better (read Inverters 101 if you have questions).  A small cigarette lighter inverter won’t do it.  Equally, you can’t run it off a 1000 watt generator, it will have to be 2000 watts minimum.

The Desk Pro model is actually made for hotel rooms.  The major differences are that it is supposedly a little more ruggedly built, only has one cup size (8 ounces) and only draws 700 watts, making it suitable for a 1000 watt inverter or generator.  It is about the same size and is about $10 cheaper.  While I like the option of three cup sizes on the Mini Plus, the more rugged construction, lower power draw and slightly lower price of the Desk Pro make it the one I’d choose.  I have only found the Desk Pro online at a limited number of places as it is generally sold through distributors for the hotel industry and have not seen it at any local stores.

Neither of these machines is top heavy and or prone to tipping over in normal conditions.  Both weigh just under 9 pounds and are about 11″ high, 7″ wide and 11″ deep.  Both completely use the water in the reservoir with each cup made, so there is no water left in the machine and hence none to spill when stored.

If you’re thinking about getting a unit with a water reservoir, note that they are about 3″ larger in all directions, use 1500 watts (making it very iffy to run off a 1500 watt inverter) and weigh 12 pounds (approximations as each model is slightly different).  With these, you’ll have to dump the water before storing and there is always some water left in the unit which could leak out in rough conditions or if the unit fell on its side.

Refillable Pods.  If you are going to get a refillable pod, the ones that are one piece (instead of three as the official Keurig one is) are much easier to use and much less likely to have a part go missing.  I got a two pack (see my choice below) so that I could fill them for both of us at once and make two cups consecutively instead of making one, letting it cool so I can handle it, emptying it, refilling it and then making the second cup.

Using a filter inside the pod makes it much, much easier to empty the pod.  The pod that I got — and recommend below — does not require a filter, so you don’t have to worry about running out and not being able to make coffee.

483 Shares
Some links above (including all Amazon links) are affiliate links, meaning that I earn from qualifying purchases. Learn more.