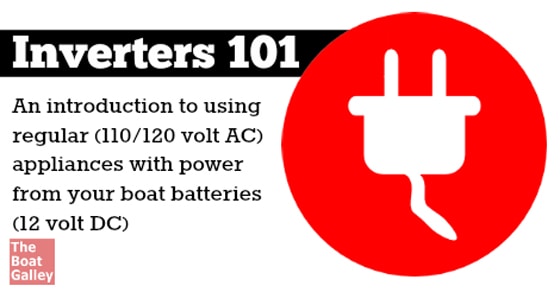 Two points I want to make right at the beginning of this article:  I am NOT a marine electrician and this article is NOT intended to provide all the answers you may need on the topic of inverters.  It’s designed to be an introductory article, and yes, in places I have deliberately kept the explanation simple and not discussed all the possible variations.  The goal is to keep it non-techie!

Note that some of the most important things to know are at the bottom of this article, so if you’re considering purchasing an inverter, be sure to read the final few sections.  I don’t recommend any specific models, for two reasons:  everyone’s needs are different, and models are constantly changing.

Most boats have 12-volt DC power on board, from batteries.  Things that you plug into a cigarette lighter run on 12 volts.  Things that have a “normal” household plug run on 110/120 volts AC.

An inverter takes the 12-volt DC power coming from the batteries and converts it into 110/120 volt AC power that you can plug “regular” plugs into.

Portable inverters are very simple.  They plug into a cigarette lighter and have one or more “regular” outlets, such as that shown at right.  They come in several different styles — some have cords that go to the cigarette lighter, some have more than one outlet, some (such as this one) also have a USB outlet for charging electronics.

Portable inverters are convenient as there’s basically no installation, they’re easy to put wherever you need them and they’re relatively cheap.

The downside is that you can’t use them for anything that needs a lot of power (more on this below).  Microwaves, blenders, and vacuum cleaners are just some of the things that usually won’t work on a portable inverter.

For larger electrical loads, you need a permanently-installed inverter.  They are usually installed by a marine electrician — because of the electrical currents involved with both fire and electrocution a possibility if not done right, it’s not something to do yourself if you’re not trained.  Every installation is different, it seems, but basically this type of inverter is larger and installed in a locker in an out-of-the-way location.  It’s permanently wired to the boat’s batteries (often, it’s a combination inverter/charger that also handles charging the boat’s batteries from shore power).  Most times, there is a switch to turn the inverter on when needed.

Depending on how your boat is wired, you may have to plug things into the inverter (as in the case on our new boat, Barefoot Gal). Other boats (such as our previous boat, Que Tal) have the inverter wired to regular household-type outlets in convenient locations in the boat that you can plug things into.  If so, you’ll usually have to both turn the inverter on and flip a switch on the “AC” power panel to energize those outlets.

Inverters are sized in watts.  Luckily, most appliances are also labeled as to how much power they draw in watts.  For example, my microwave is 1200 watts. The inverter must have a larger watt rating than the item you’re using, including the “start-up load” (discussed below).

Some appliances, however, only state their electrical “draw” in amps.  But if you know the amps, you can calculate the watts.  Use the equation:

So, a regular household appliance — say a mini-blender — that draws 5 amps is the same as 600 watts.

In general, portable inverters range in size from 75 watts to 400 watts.  Most cigarette lighters can handle the 75, 150 and 200 watt inverters and associated loads.

However, a 400-watt load can be too much for many, and will blow the internal fuse or trip the breaker.  If you are thinking of buying a 400-watt portable inverter, make sure that your cigarette outlet(s) can handle it.  The receptacle itself, the fuse, the wiring and the breaker on your electrical panel all have to be capable of handling the load — and many aren’t.  (A 400-watt load is going to pull ± 35 amps DC.)

Because of this, once you get over 400 watts, almost all inverters are designed to be hard-wired into the boat’s electrical system.

Okay, now I’m going to confuse the issue a little more.  In the last step, I talked about determining the load of the appliance you intend to use with the inverter.  But its regular “running” draw isn’t the only thing you need to know.

Most electrical motors use more power for just a few seconds when they are first turned on.  It can also be a bit of an issue for some electronics, although it’s not usually near as large of a problem.

Figuring out the initial surge draw can be tough.  Manufacturers almost never state this and I’ve never seen a “rule of thumb.”

There are two ways to deal with this:

Okay, there are LOTS of possible reasons.  But here’s a quick list of things to check.

AC power that you get ashore from the power company has a true sine wave form — the red line in the drawing at right.  But it’s complicated to change power from DC current to that smooth wave form.  So for years, inverters used what is called a “modified sine wave,” or step function, such as the blue line.

The problem is that certain electrical devices don’t like a modified sine wave.  Electronics and battery chargers (such as for cameras, cell phones and cordless drills) are notorious for not running properly with modified sine wave inverters.  Some displays (such as TVs and monitors) will have funny lines on them, audio equipment may have a buzz, and we totally fried the charger and battery for a cordless circular saw.

The good news is that over the last 8 years or so, “pure sine wave” inverters have come on the market.  They tend to be more expensive, however.  Most will state somewhere in the technical specs that they are “pure sine wave” although sometimes you really have to dig for the information.  Generally, if an inverter is marketed for charging electronic devices, they are pure sine wave . . . but it’s not a guarantee.

My recommendation is that if you’re getting an inverter, get a pure sine wave one.  Consider the cost of what you’ll be plugging into it.  The equipment that we ruined by opting for a “cheap” inverter (it was a portable) cost far more than what the better inverter would have cost.  And if you’re going for a hard-wired inverter, I definitely would opt for the pure sine wave.  Chances are very good that somewhere on the boat, you’ll plug in something that is sensitive to the wave form.

Due to less than perfect efficiency in changing power from one form to another, it’s highly likely that items will be slightly less powerful than when plugged into shore power.  For us, anything we put into the microwave took about 25% longer to cook when running on the inverter.  And after a summer at anchor, Dave would inevitably forget to set the timer for a minute less when microwaving popcorn on shore power and the first batch back at the marina would be burnt!

Two More Things to Think About

Two more things that are really beyond the scope of this article, but that I want to point out:

Once again, I’m not an electrician.  Prior to our first trip on a friend’s boat, I had no clue what an inverter was, or why I needed to switch it on before using the microwave.  I learned a lot as we bought our boat and cruised.  I’ve only scratched the surface here, but hopefully this information will give you a basic understanding of inverters and the questions to ask before buying, installing, or using one.