You are here: Home / Cruising & Chartering / Keeping Band-Aids On 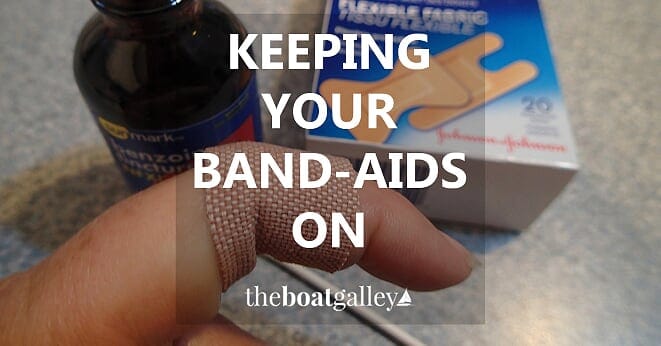 How do you make Band-Aids stick so they don’t fall off, even if you sweat, swim or work with greasy parts?

Almost as soon as we moved aboard Que Tal, Dave and I had problems keeping any sort of adhesive bandage on.  Band-Aids, butterflies, Steri-Strips, mole skin, and adhesive tape just came off in a matter of minutes (if we were lucky, hours).  We had to come up with a solution!

One evening at a dock party, I was asking a more experienced cruiser if they knew of any way to make Band-Aids stick better. The woman behind me overheard my question and gave me the answer I was seeking:  tincture of benzoin!

The Answer: TIncture of Benzoin

The woman was an anesthesiologist. She told me that when doctors use butterfly bandages or Steri-Strips in place of stitches, they always swab the skin where they want the bandage to stick with tincture of benzoin.  While I don’t remember her name — her boat was Long Tall Sally — she even had an extra bottle that she gave us.

Tincture of benzoin works wonders.  I have no idea why it’s not widely known, but I’m doing my part to spread the word.  Seems to me that it should be in everyone’s first aid kit — shore dwellers as well as boaters!

How to Use Tincture of Benzoin

Tincture of benzoin is simple to use.  I found a Q-Tip to be the best applicator if the bottle doesn’t come with one. Just dip it in the bottle then wipe it where the bandage should stick.  Let the tincture of benzoin dry on your skin for just a few seconds — about as long as it takes to pick up the Band-Aid and take it out of its wrapper — and then put the bandage on.

Now, before putting the cap back on, wipe the threads well.  If you leave some of the liquid on the threads, it will do just as good a job of keeping the cap on as you want it to do with the Band-Aid.  I’ve had to use pliers to get the cap off when I neglected this step!  (UPDATE: put a tiny bit of Vaseline on the bottle threads and it won’t stick.)

A bottle will last for several years — I think we had that original bottle for 7 years!

You can buy tincture of benzoin in bottles or already on swabs and packed in individual foil pouches.  I have not used the swabs, but they seem like they’d be handy for taking with you on hikes. You wouldn’t have to worry that you won’t be able to open the bottle out on the trail. The downside is that they are pricier per use than a bottle.  Even in foil pouches, it’s a good idea to store the swabs in a Ziploc bag as they can dry out.

While Band-Aids stick much better, it’s not like you’re applying them with the medical equivalent of 5200. It won’t be a problem to get them off when you need to.  I’ve also learned that in general, the “flexible fabric” bandages tend to stick better than the “plasticky” ones. Tincture of benzoin helps both types but use the flexible fabric Band-Aids to get the best results.

Where to Buy Tincture of Benzoin

Many U.S. pharmacies carry tincture of benzoin, but you often have to ask for it.  We never could find it in Mexico or Central America.  We now live in a small rural town in the US, and two of four pharmacies in town carry it.

If you can’t get tincture of benzoin locally, the best source I’ve found is Amazon:

Tincture of benzoin is also sold as a spray, but I’m afraid that the spray nozzle would quickly clog and have not tried it.

Here’s hoping you won’t need Band-Aids too often. But if you do, at least you’ll know how to keep them on!

This article was originally written on August 18, 2011. It has been substantially updated and republished on January 6, 2019. Original comments can still be found below.

1.9K Shares
Some links in this article (including all Amazon links) are affiliate links, meaning that we earn from qualifying purchases.