You are here: Home / Podcasts / Jury-Rig Your Rigging 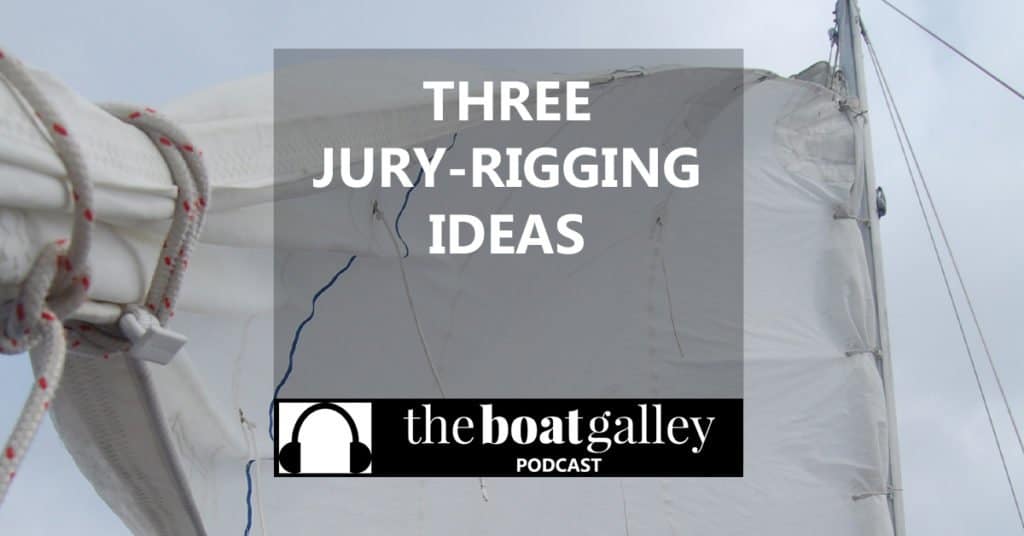 You are five days out of Bermuda. A shroud breaks, your mast threatens to come down. Few cruisers can imagine a worse scenario. Join Lin Pardey as she relates how two different cruising crews faced this exact situation and came up with jury-rigging that let them sail their boats onward without calling for outside assistance.

Prefer to read? Transcript below.

Sponsor: Shambala Sailing Adventures, offering customized learning charters in Exumas, Bahamas. Sail her like you own her with coaching from Captain Suky Cannon. Contact her at [email protected]; mention this podcast for 10% off.

During the past two months two young couples have told us about the unexpected mast problems that almost ended their cruises. In each case they had rigging failures while they were far from land. In each case they used their ingenuity and gear on board to stabilize the situation and sail onward without calling for assistance. Good on them, the lessons they learned should be added to your –Just-in-case-Jury-rig plans.

Thomas and Claire Khyn are two young French sailors (27 and 29) who stopped in here at Kawau just a day after we arrived home. They arrived here in North Cove, New Zealand last week and have have been cruising for about 16 months since leaving Britanny. Their boat is an older Gib Sea 38 named Schnaps. Soon after they left the Gulf of Panama bound for Easter Island, they noticed the swage fittings on their lower shrouds were beginning to fracture. They had been keeping a careful eye on these swages because as Thomas said, “we inspected them every way we could but we could never see what was actually happening inside those fittings.”[1] Now they watched first one, then the other break as the boat worked through the constant swell they met. They rigged spare halyards to support the mast, they set up all the spare line they had as shrouds. But the stretch in the line let the mast bed far more than they felt was safe. Then they got a new idea. Thomas went aloft and rigged a bridle where the lower shrouds attached to the mast. He then took each end of an eight-meter long piece of chain aloft and secured it as temporary shrouds, using block and tackle at the lower ends to tighten it in place. Since the chain had no stretch and the short length of line used as block and tackle had little stretch, the mast stayed true while they sailed onward to the Gambier Islands. Once there they were able to order mechanical end fittings from Papeete, Tahiti, and wire to replace the broken shrouds. (Read more about these two sailors and a less frequently visited cruising destination.)

Ky and Hannah Heinze had just sailed past Bermuda, headed for the Mediterranean on board Beatrice, their Cape Dory 30 when the headstay fitting broke. They lashed their forestay to the bowsprit with a block and tackle and started beating back to Bermuda using just the staysail and main. Unfortunately, the windward lowers broke just above the Norseman fittings and brought the whole mast down. They worked for hours getting all the gear free and on board along with both parts of the severed mast. They then were able to set the upper portion in place as a very abbreviated mast. It is what they did to create a jury-rig mainsail that really impressed us. They tied two reefs into the foot of the mainsail, attached slides to it that they had removed from the luff, fitted them into the mast groove, and raised the modified foot as the new luff. With a combination of two hank-on staysails they were able to beat back to Bermuda. Even though it took them two days to jury rig the boat and nine days to beat back, they felt a real sense of accomplishment.  Hats off to this intrepid couple who, after a long stay in Bermuda during which they re-rigged their boat, went on to cruise for another six months in the Caribbean before returning to the US so Ky can get his doctorate.  One day, they hope to sail to the Med where Ky wants to do further research using his boat as a base while he visits the ancient sites of early Christianity.

We are a bit concerned about the number of rigging failures we are hearing about over the last few years. If you read Webb Chiles account of his latest sailing in the July issue of Cruising World you see he mentions five different wire failures. Add this to those mentioned in Thomas footnote and it makes us wonder if modern riggers are fully aware of the rigors of ocean cruising. Many modern boats have very stiff hulls, cruising sailors tend to load their boats slightly (sometimes a lot) more than the designers expected, modern sails do not stretch at all so all the shock loads are directed onto the shrouds. Mechanical end fittings or swages are the norm and these do not have the flexibility of spliced wire.  In our minds, all these factors add up to the need for extra heavy wire for offshore voyaging.

[1]We asked Thomas to check this account and he wrote to explain, “The boat was refitted by a conscientious owner ten years before we bought it, then it sat in the marina without being used or sailed. Though we are not 100% sure of it – the rigging was changed during this refit, so we assume it was about ten years old also. As it had not been stressed during all these years, we thought – and it was our mistake – that we could rely upon it until our arrival in NZ, where we would have changed it anyway. But two crews among our friends who changed all the rigging before leaving Europe also had rigging failures at the same time and place (but only 1 strand and they were close to the islands so it was little worry).

522 Shares
Some links in this article (including all Amazon links) are affiliate links, meaning that we earn from qualifying purchases.