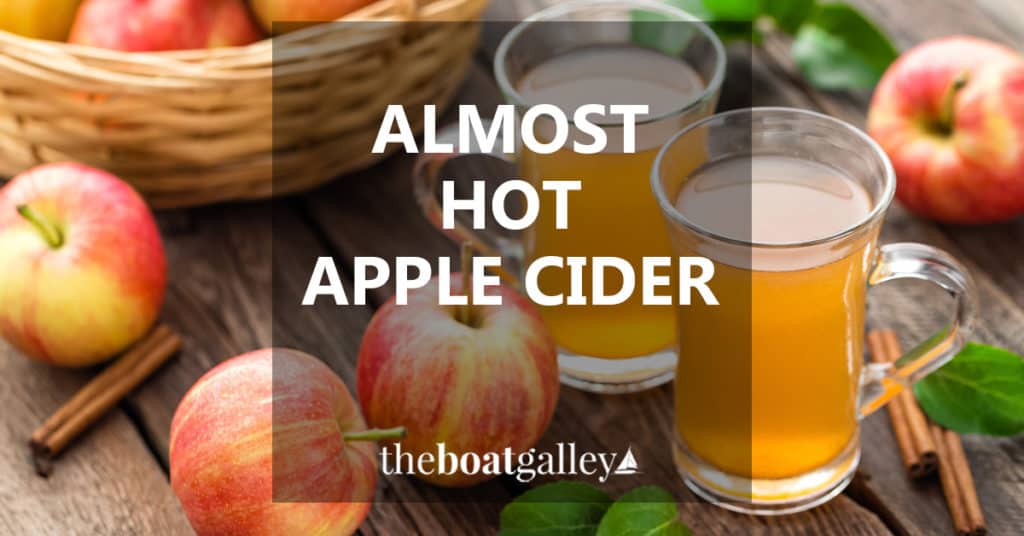 As a child growing up in Michigan, I loved hot apple cider in fall and winter.  And it continued to be a favorite even as an adult.  Then we went cruising in Mexico, and I couldn’t get cider.

So I came up with “almost” hot apple cider!  Maybe not exactly the same, but still excellent on a cool day in the cockpit.

Apple cider and apple juice are both made from fresh apples.  The big difference is that cider isn’t filtered, isn’t pasteurized and isn’t sweetened.  Apple juice, on the other hand, is filtered so that it’s clear, pasteurized so that it stays good much longer and is often sweetened.

We discovered that while we couldn’t get cider in Mexico (and my parents and other friends complain about not getting it in Florida and other southern states), you can buy apple juice almost everywhere.  And if you can find UNsweetened apple juice, it tastes fairly similar to cider — or at least similar enough if you are craving hot apple cider and it’s your only option!  You can even use sweetened apple juice, but some people find it just “too sweet” — I think it depends on the brand and how much sugar has been added.

Sometimes, we could get cinnamon sticks; sometimes we couldn’t.  If you can’t, a bit of ground cinnamon, allspice, nutmeg or pumpkin pie spice works well.  And if you’re making a Thermos full to take along on a hike, it’s much easier to add ground spices in the Thermos than to try to take cinnamon sticks along without breaking them.

285 Shares
Some links above (including all Amazon links) are affiliate links, meaning that I earn from qualifying purchases. Learn more.