How do cruisers communicate? I’m not talking here about getting weather forecasts on the high seas but communicating with friends and family around the world.

This is one of the biggest changes since we began cruising in 2002. Back then, our only real choice was to send an email over SSB on the boat or — in larger towns — go to an internet cafe and send an email. Once or twice, we even went to a phone center and paid exorbitant amounts to place an international phone call.

Now, in the words of Steve Jobs, “there’s an app for that.” Many apps, actually.

The topic of cruiser communications is huge, so I’m going to limit this to several smartphone apps but note that several of these have counterparts for laptops too.

I’ll start with the fact that most cruisers outside their home country don’t use traditional international calling or texting as that just gets too expensive. Instead, they connect their smart phone to wifi or use cellular data to connect to the internet and use an app to talk, text, or share pictures.

Facebook Messenger (which you can access through regular Facebook or the Messenger app) is wonderful because almost everybody you want to connect to is already on it AND it uses less data than any other well-known app.

With Messenger, you can text, send photos, make a voice call, make a video call or even record a voice message.

Roughly 95% of the people I need to contact are already on Facebook. I don’t have to ask them to download — or learn to use — another app just to connect to me. I do, however, have a couple of relatives who are either not on Facebook at all or don’t check it often enough to make it useful, so the other apps still do have their place.

Facebook Messenger also uses roughly one-third the data of Skype and WhatsApp (from what I can discover, it also apparently uses less than FaceTime but I haven’t found a direct comparison). Obviously, this matters if you’re using cell data and pay by the amount used or have a data cap. But it’s important in a number of other situations (congested wifi, poor signal strength, low bandwidth), too: you’re more likely to be able to use the service even with a bad internet connection.

And one further tip that applies to all the services here: video takes the most bandwidth, voice less and text least. Also, texting is best if your connection is going in and out as a message will go out or come in as you have a connection. With voice or video, you will have a lot of very annoying drops.

Skype also gives you the ability to chat via text, voice or video. For the cruiser, it has one huge advantage over many other apps: you can call landlines and cell phones all over the world for far less than using traditional international calling.

When we are out of the US, we use this feature extensively to contact family and friends who are very low tech. Yes, there are people we want to stay in contact with who have nothing more than a landline or perhaps a flip phone.

We also use it to contact companies for parts and/or tech support. While many do offer some sort of chat, sometimes we need to talk in order to troubleshoot a problem. Skype voice-only works really well — most phone calls we’ve made are just two cents a minute.

You can also get a Skype phone number so that those unconnected friends and family members can call you on a “regular” number from their phone.

See all the Skype features here (note that some are free, while others have fees — but overall, the charges are fairly minimal).

Once you get outside the US, WhatsApp is the messaging app that everyone uses. In most other countries, texting costs per message using the cell connection, so when there is wifi, people use WhatsApp to message over the internet. In general it’s my experience that Americans you meet (cruisers or ex-pats) will be on Facebook while locals and cruisers of other nationalities will use WhatsApp. It’s free and it’s dead simple to use, so there’s no reason not to use it to connect to those who prefer it.

You can also use it for free video or voice calls to another WhatsApp user. Learn more about WhatsApp here.

FaceTime is the granddaddy of the video call apps, available on Apple products. Both parties have to be using Apple devices — iPhones, iPads or Mac — which somewhat limits its usefulness. I have never used it (only got an iPad a few weeks ago), but know many people do, especially for family chat times and even virtually “attending” events such as weddings and graduations.

Outside the scope of this article, but if you are cruising where there is no — or spotty — internet, you may want to consider satellite communications: either a Garmin inReach tracking and texting device (read my post about it here) or an Iridium GO! for email and some internet applications (we do not have one; see Sailing Totem’s post for details). 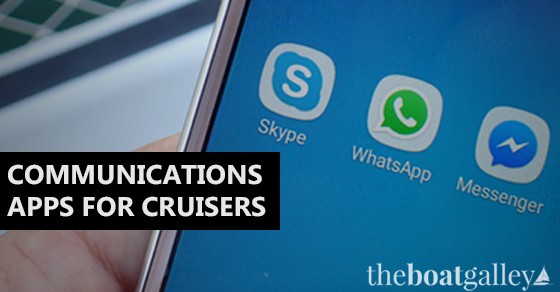 65 Shares
Some links above (including all Amazon links) are affiliate links, meaning that I earn from qualifying purchases. Learn more.