You are here: Home / Boat Work / An Easier Way to Splice Double Braid

It all comes down to the fid. Simple.

We had to replace our spinnaker halyard after Hurricane Irma, and our experience with our first double-braid splice told us we didn’t want to do a second. So we called on our friends at Keys Rigging, in Marathon, Florida.

They said sure, they could do the splice. But why didn’t they teach us an easier way to do one at the same time? Sounded like a good deal to us.

The first thing they said was that standard fids are hard to use (yeah, I’ll agree). They make their own from the center strand of 1×19 rigging wire — you need a piece 18″ or so long. You can get one from the scrap pile at any rigging shop. Fold it in half and tape the ends together. Make sure that the fold is a sharp 180° turn — the closer together the two wires, the easier it will be on the second fid pass.

I’ll be referring to the directions given by Jamestown Distributors here for the initial measuring of the line. If you don’t have a traditonal fid (and why would you since you just made your own?), here’s a handy chart of fid lengths.

Do Step 1 and the first part of Step 2 in the Jamestown instructions, where you pull the core out of the cover. Don’t tape the ends as they suggest. Next, you’re going to taper the cover. From Mark C, go one “fleck” towards the end of the line and pull two strands of the cover out on each side of the line. Do this at every fleck to the end of the line. It’ll look something like this (you can use a needle, paper clip or even the tip of a pen or pencil to pull the strands out. Cut them all off flush with the cover.

Then make Marks 1, 2 and 3 as per the Jamestown instructions.

Put the folded end of your homemade fid into the center of the core at Mark 3 and out at Mark 2.

Thread the tapered end of the cover through the “eye” of the fid.

Pull the fid back out through Mark 3 until Mark A on the cover (the mark just above where the taper starts) is at Mark 2 of the core (letter marks are on the cover, numbers on the core). Where Mark A and Mark 2 meet is called the crossover point. It’s critical that these marks line up, so put a needle or paperclip through the cover and core at this point.

Put the fid in at Mark D and out at Mark C. Be very careful to put the fid between the cover and core and not snag either one of them (snagging either one will make it almost impossible to get the core through). Thread the loose end of the core through the eye and pull the whole fid back to Mark D until the core comes out.

This is really tough. You’re going to say something along the lines of “I thought this was an easier way to splice!” Trust me, it’s considerably harder with a traditional fid. Just keep pulling. Every so often, stop and bend the line back and forth where the tip of the fid is — this will help loosen the cover. Still, once the tip of the fid gets to the point where the cover already has the core in it, it’ll be tough. I bent my fid into an “L” so that I could stand on it while pulling.

Finish with Steps 6 and 7 from the Jamestown directions. I find that it’s best to use a cleat or winch on the boat to hold the end of the line — those are the sturdiest points on most boats.

Let The Boat Galley help you get ready to cruise with a FREE mini course: Prepare to Cruise. Click to learn more and sign up. 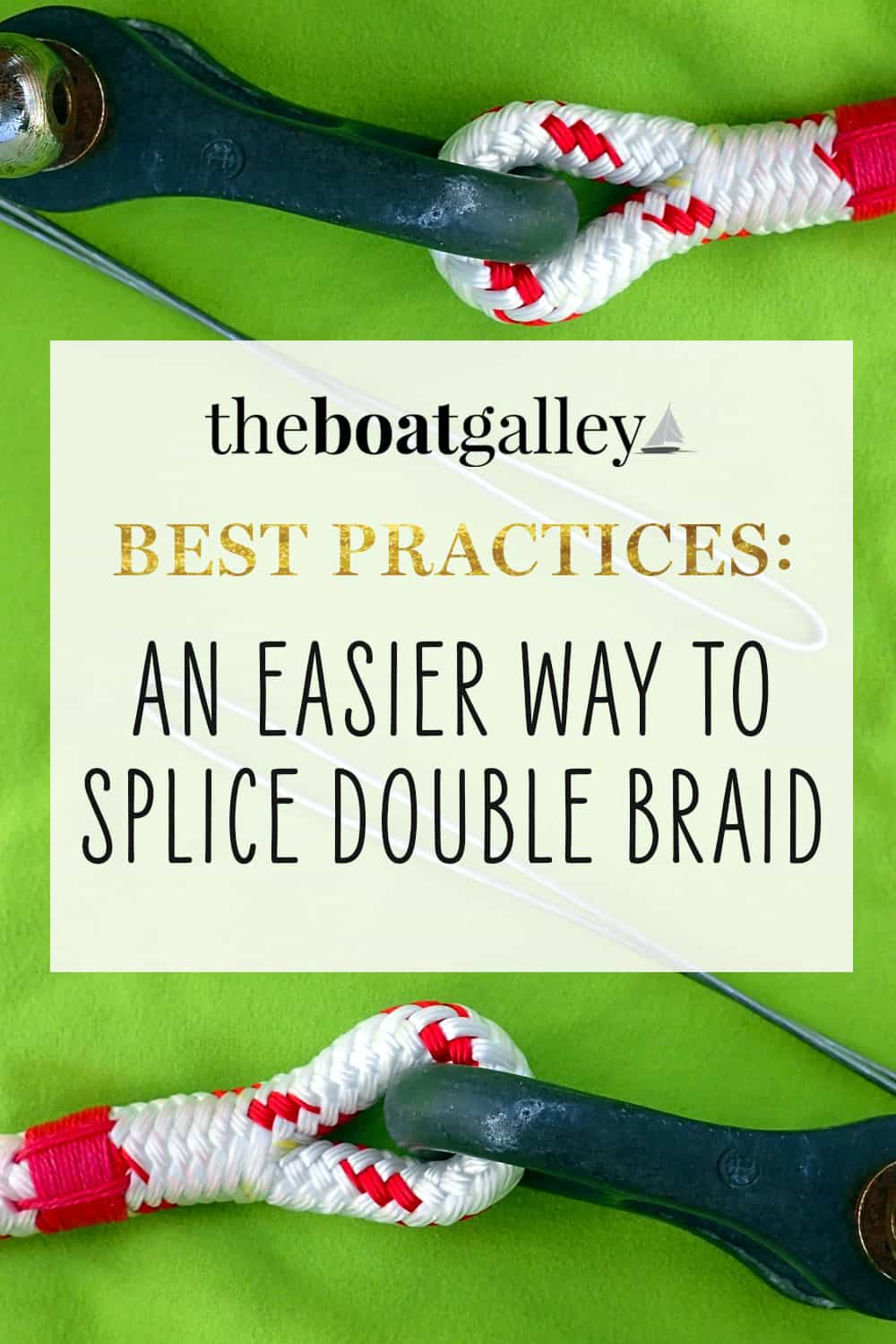 3K Shares
Some links above (including all Amazon links) are affiliate links, meaning that I earn from qualifying purchases. Learn more.