You are here: Home / Buying a Boat & Gear / A Great Fillet Knife 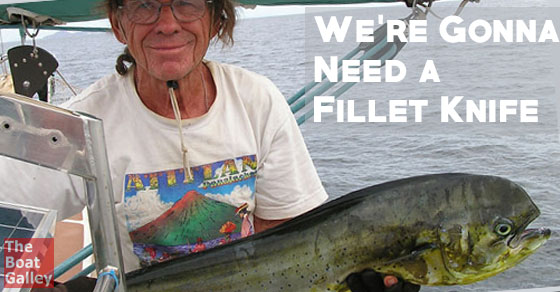 We basically just stumbled onto the best fillet knife I’ve ever used.  Just as we were moving aboard Que Tal, Dave’s sister inherited a house and in cleaning it out, Nancy came across a brand new fillet knife and handed it to Dave, saying he could use it on the boat.  I already had a fillet knife, but Dave didn’t know that, so he took the new one.  Am I ever glad he did!

The knife was a Rapala 7″ Fish’n Fillet (link is to Amazon). Dave uses it for basic fish filleting, and I both to remove the skin from the fillets and also for boning other meat (you can see me using it in my video on how to bone a chicken breast).  It is infinitely better than the “fillet and boning knife” that came with my other knives — and better yet, it’s also cheaper!

Why do Dave and I both like it so much?

Probably the best “endorsement” I can give is that whenever we caught a fish, we both wanted to be using the Rapala — Dave would do the basic filleting on deck and I’d trim things up and remove the skin in the galley.  He always got the Rapala as he began first, and I’d make do with my other fillet knife until he was finished.

]When I saw another Rapala at a swap meet, I grabbed it for myself.  And while we left most of our gear on Que Tal for the new owners, I did take one of the Rapalas with me . . . and it’s now in use on Barefoot Gal (and I use it for many things besides fish — it’s really my favorite knife).

Rapala makes similar fillet knives in a shorter length (maybe 5″?), the 7″ one that I prefer and also a 9″ length that is probably more for large game fish.  It’s available at large outdoor stores (Bass Pro Shops, Cabela’s, etc.) but Amazon seems to offer slightly better prices:

238 Shares
Some links above (including all Amazon links) are affiliate links, meaning that I earn from qualifying purchases. Learn more.