You are here: Home / Podcasts / Working as You’re Cruising 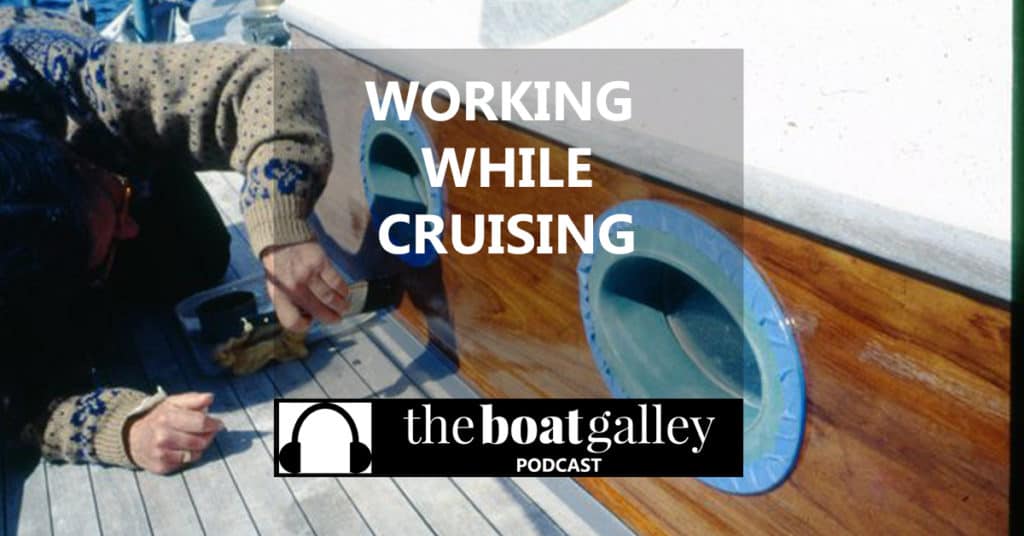 Lin Pardey shows how working along the way can get you out cruising sooner than you dreamed. Even more important, she shows how many cruisers felt their lives were enriched by the jobs they encountered as they voyaged.

Lin’s books telling how they worked as she and Larry circumnavigated (links are to Amazon):

And a book Lin published:

And a group she mentioned:

Hands Across the Sea: www.handsacrossthesea.net

Prefer to read? Transcript below.

Sponsor: SeaTech Systems, offering cruiser-tested solutions for weather and communications. Whether it’s satellite, wifi, cell, or SSB, SeaTech’s packages are simple and affordable. Coupon Code: Free shipping through July 2018 with the code GALLEY2018 at checkout. Be sure to subscribe to The Boat Galley podcast to get new episodes automatically in your podcast player.

We had just come ashore after showing two potential voyagers on board Taleisin. The cold, early spring wind made the hot chicken and bean soup they had brought along for dinner, particularly welcome.

“We are both tired of the rat race, tired of working just to consume, definitely don’t need a 2600 square foot house,” stated our guest. “If we sell the house and my business,” he continued, “then find the right boat and buy it for X and can figure out how to live on X per month, that’s it, retired.”  His numbers made sense, his expectations appeared realistic.

I looked toward his wife to see how she was reacting. From the glow on her face I sensed she was on the same track. Our conversation went off on a multitude of tangents as I savored the enthusiasm and sensed the potential joys awaiting a couple who were not even half our ages, and just wetting their toes in the grand adventure of voyaging under sail.

It wasn’t until three nights later that I recalled his declaration about retiring and then living frugally to eke out the income from a nest egg. I spent a good part of the night pondering what, given more time to think, I should have answered.

The next day I contacted our visitor. “You asked if you could live and cruise long term on X a month. Larry and I agreed you could but, though being free of jobs will feel wonderful for a while, I doubt that after a few years, you’d find it fully satisfying. I bet you come across some career you never imagined just because you ran away to sea!”

As I look back at our sailing life, and that of many of the other addicted voyagers we have met along the way, I know this has been the case.  Many, like us, dreamed and schemed just to get a few months off to sail away, then came across sometimes boring, sometimes really interesting but always changeable ways to extend our cruising kitty. Others had sold large homes, inherited money or had their companies bought out for sums that made earning money relatively unimportant.

The majority of these deep pocket voyagers also found themselves enjoying periods of gainful employment working at jobs or projects they’d never envisioned before they set sail.  That’s the magic of stepping off the normal paths of life – you not only encounter unexpected opportunities, you have time to think and trial ideas that often lead to new careers.

I remember three young English sailors, a former London bus driver, an apprentice box builder and a bricky (brick layer). Broke but happy in Gibralter, they made a really low ball quote to lay tiles in 40 new apartments, got the job, worked 7 days a week, 12 hours a day and a sailed off with new skills and enough money for another 9 months of exploring under sail. Later one became a very successful super-yacht skipper, the second returned to the UK after two years afloat to become a successful builder, the third became a sailing instructor in Italy.

Then there were two school teachers, definitely budget-minded cruisers, who happened to stop at a small resort in Costa Rica for drinks. Two months later they were managing the resort while the owners took a long needed break. Resort management became their way of voyaging – sailing onward until they found another resort owner needing a break.

Several of our cruising friends, frustrated that they couldn’t get the gear they wanted for their boat, came up with new ideas which lead to sometimes small, sometimes quite large new businesses. One created a fine line of marine hardware, another designed then began manufacturing a more affordable windvane. Some of our voyaging friends, who said they were never going to work again, found their cruising took them to places where they found themselves needed. They set to work trying to help local folks and, like Tom and Harriet Linkskey (www.handsacrossthesea.net) who began collecting books and school supplies for some of the poorer villages in the Caribbean, then ferrying these supplies on board their 42 foot Cat, ended up creating very helpful and fulfilling new careers.

As I look back at the 47 years Larry and I actively voyaged and explored under sail, it is often the times we spent working that come first to mind, the people we met because we stopped for a while to be part of the local scene, the varied  jobs (sometimes even crazy) that we were offered or even invented,  the unexpected careers that opened to us.

Before I met Larry I was planning to earn my living with numbers or music – I love numbers, top marks in math, almost failed in English classes, especially if composition was part of it. Musically I now realize I wasn’t very talented, but tell that to an 18 year old. Never did anything more physical than washing my car on a Saturday morning.

Yet I ended up earning money by doing finish work on boats, being a carpenters apprentice, by assisting on deliveries, cooking on a shrimp trawler, coordinating a wooden boat festival, managing a shipyard, becoming a writer, then seminar presenter, an author. I am not sure if the folks who are willing to take the plunge, quit normal life and go cruising are better at imagining new careers, or if voyaging makes you more flexible and willing to try new ideas.

But I never could have imagined that, when Larry’s diminishing health meant crossing oceans had to be laid aside, I’d end spending four years publishing nautical books including my favorite, Voyaging with Kids which gave me a chance to work with three sets of parents who had cruised extensively with their children. As a publisher I got to keep touch with the world of cruising and doing lots of playing with numbers too.

More recently, since Larry has been in full-time care due to his very advanced Parkinson’s dementia, I have begun voyaging again. The things I am now learning, the people I am meeting who want the encouragement to get out cruising has led to this newest venture, creating podcasts to encourage other sailors.

And that is what I tried to share with our visitor. Setting off to cruise the world could be just the beginning, an adventure in itself and a building block that leads to a new, more fulfilling career, or maybe even an ever-changing array of careers.

106 Shares
Some links above (including all Amazon links) are affiliate links, meaning that I earn from qualifying purchases. Learn more.