You are here: Home / Living on a Boat / Tips on Using a Solar Shower 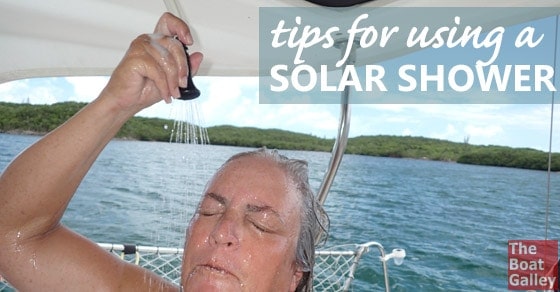 Dave and I have literally never showered below decks on either of the two cruising boats we’ve owned. Basically, it’s for three reasons. First, without a separate shower stall, water would get all over everything in the head. A pain to move it all. Second is that we just don’t need any more humidity below deck. And third is that the showers on both our boats did nothing to conserve water.

Instead, we’ve used various brands of solar showers bought from Amazon. To be honest, our first one had been left by the prior owner of our first boat and we figured we’d never use it . . . until we discovered that the boat didn’t have a hot water heater (somehow that slipped by us in reading the specs . . .).

We were frankly surprised at how well it worked and how little water we used with it. And so we used a solar shower the whole time we owned the boat . . . and bought another one with the first batch of things for Barefoot Gal. With 10+ years of using one now, we’ve learned a few things:

My favorite right now is from Advanced Elements, but Amazon sells many brands of solar showers, as do various camping, outdoor and big box stores.