You are here: Home / Living on a Boat / Three Pairs of Shoes

Since 2002, just after we moved onto Que Tal, I’ve only had three pairs of shoes at any one time. Okay, I also have a pair of sailing boots that double as fin booties. So maybe you could say I have four pairs. Ditto for Dave.

But I do get asked about what shoes I/we have and what do I recommend, so here goes:

Keen sandals. I’ve worn Keen sandals since 2005 for about 95% of what I do. Obviously I love them. So most of this post is about why they work so well for boat life.

Up until the very last pair that I bought, I always wore the Newport H2; my latest pair is the Whisper model. Dave also wears the Newport H2’s.

All of the models with “H2” are designed to go in and out of the water (perfect for wading to/from the dinghy, walking on the beach, etc.); several other models such as the Whisper are as well. They don’t stretch out when wet, get moldy or create blisters when worn wet on a hike. They’re great when wading in places without a nice sandy bottom.

Almost all Keen sandals are what are called “hiking sandals” meaning that they have the support needed for all but the most rugged hiking — and we certainly put them to the test while cruising the Sea of Cortez. The soles are thick and thorn-resistent — a quality I came to value after taking a simple walk in Baja with Crocs. Pretty much every single one of those thorns came right through the sole. 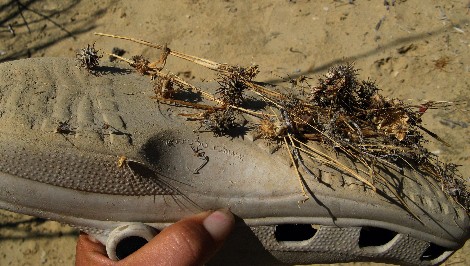 One of the best features about most Keen models is the toe guard — it really prevents a lot of tripping incidents and toe injuries. Admittedly, it’s harder to shake a small pebble or bit of gravel out of the sandals, but overall that’s less of a problem than the toe injuries (and thorns I kicked) with my previous Tevas. Because of the toe guard, I was even able to wear them while hiking over a lava field in Hawaii: Keens are the only brand of sandals that the guide company will let you wear; otherwise you have to wear sneakers or hiking boots.

Back in 2004/5, several cruising friends recommended the Keen Newport H2’s to me after that thorn incident with the Crocs, but I resisted for over a year due to the cost. Nearly $100 for a pair of sandals??!!? I finally broke down and bought a pair when I realized that the cheapies only lasted a few weeks with the abuse I gave them (shoes today, it seems, generally aren’t designed for people who walk just about everywhere). I’ve decided that Keens actually are a good deal: a pair lasts me 6 to 9 months of pretty much constant wear and then becomes my paint shoes!

One thing that I particularly like is what I can “field repairability.” If anything in the sandal fails, it tends to be the stiching that holds the woven fabric (almost webbing) to the neoprene lining, and the shoes get loose — but not unwearable. A bit of dental floss or sail thread and a needle, and they’re good as new again.

I’ve never had the shock cord lacing break, but if it did it could be tied back together . . . and we always have spare shock cord on board if we needed to replace it. The repairability was critical when we were in the Sea of Cortez, Mexico and there were no shoe stores nearby . . . and the ones in the bigger towns only carried “dressy” sandals for women, not walking sandals. Other sandals that tend to fail when the uppers pull out of the sole are not nearly as easy to repair.

TIP: If you’re going to be cruising Mexico, take several spare pairs of sandals with you. Women’s “recreational” sandals (Tevas, Keens, etc.) are almost impossible to find, and it’s hard to find men’s sandals in sizes over about a US 9.

About 2 months ago, I bought a pair of the Whisper model because I didn’t like the colors then available in the Newport H2’s for women. I like the Whispers even better — they aren’t as heavy or as clunky looking, and seem to be giving me every bit as much support and toe protection. They have the same great non-slip sole as the Newport H2’s, too. While the soles are black, they’ve never marked a boat I’ve been on.

It used to be that you could find Keens online for 25 to 30% less than in stores, but that’s pretty much gone away now — although if you wear an odd size or are willing to live with an unusual color, you may find a pair at 10% off. I buy mine from Amazon due to the huge color/size selection:

See related products to the above links for more sizes and styles.

Sneakers/Running Shoes. Occasionally, it gets cold where I am. Usually, that means that I put on a pair of socks with my Keens. But occasionally I need something more. So I get out my sneakers. If it’s that cold, I’m usually wearing jeans, so they fit right in.

Once in a while, I even wear my sneakers for a hike or long walk, but it’s pretty rare since I discovered Keens with the toe guards.

Dave’s second pair of shoes is also his running shoes; he wears them about as often as I do.

If you’re going to leave your sneakers on the boat full-time, don’t make the mistake I did when we first began cruising on Que Tal. If there is any real leather on your shoes, it will mold and then disintegrate. Only buy shoes with no real leather!

Dress Shoes. I wear dressy shoes maybe four or five times a year — most of our socializing is very casual.

For me, a pair of somewhat dressy sandals in a neutral color and style works for all occasions. I keep the heels low — after wearing flats most of the time, high heels are dangerous for me . . . and frankly, I’m not about to wear hose!

Here too, the no real leather rule applies. My current dress sandals are wide black elastic bands with low heels, chosen for their ability to go with just about anything. Espadrilles in a neutral color also work well.

A far cry from the days where I had a dozen pairs of pumps, each specially matched to certain outfits!

Dave wears dress shoes about as often as I do. He doesn’t have a suit on the boat, so “dress” shoes means something to go with nice slacks. He has a much harder time finding something appropriate without real leather than I do. Several years ago, he found a pair that are styled similarly to TopSiders, but made with synthetic leather. They work.

Bottom Line. Neither of our cruising boats have been particularly large, and what space we do have we’d rather use for things like spare parts, tools and maybe a bottle of wine. We’d rather spend our money on those, too.

When we first started cruising on Que Tal, we both way overestimated how many pairs of shoes (and how much clothing) we needed. Within just a few months, we’d both cut back to just three pairs. I was shocked to discover that I didn’t miss having more! 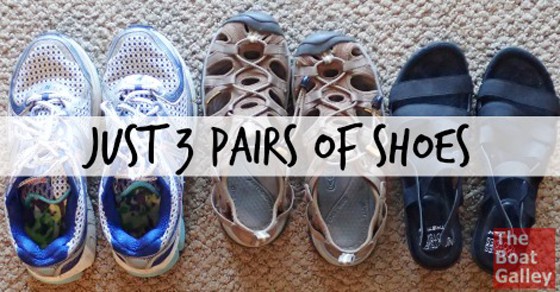 540 Shares
Some links above (including all Amazon links) are affiliate links, meaning that I earn from qualifying purchases. Learn more.