You are here: Home / Buying a Boat & Gear / How to Test Boat Batteries 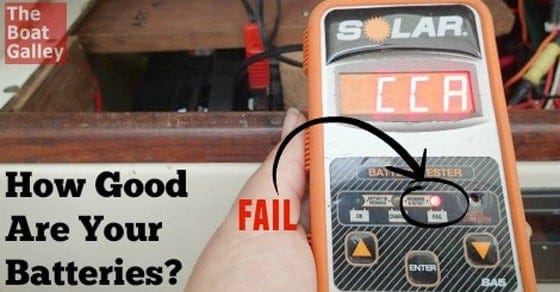 Batteries are at the heart of a boat’s systems. Unless you’re the Pardeys, you rely on them for lights, water pumps, refrigeration, starting the engine and so much more.

It’s easy to tell if your batteries are totally dead. But how do you know if they’re just starting to get bad? If it’s time to think about replacing them before they do totally die?

For years, there have been two basic ways.

You can use a hydrometer, but that requires fully charging the batteries and then not using them for a specified amount of time (depending on the source of the instructions, anywhere from two hours to twenty-four) and then sticking the instrument into each cell and taking a reading. Very accurate results, but it can be a pain to do with not using the batteries at all for the specified time . . . and a monster pain if your batteries are located in a somewhat inaccessible place.

The other method was to remove the batteries, take them to a battery shop and have them load tested. Also a pain to do.

UPDATE 3/26/2016: Two people have forwarded articles from battery gurus saying that while they may have recommended the device below in the past, they no longer think they are particularly accurate. From what I read (and I certainly haven’t read all the articles), these little testers show house batteries as being in better shape than they actually are. The gurus I’m sure are correct, but my thought is that because these little testers are so easy to use and because they don’t seem to trick you into replacing a battery that is good, I’ll still keep one as a first test but realize that if it says a battery is good, it might not really be. The other thing is that every battery shop we’ve taken batteries to in order to have them “load tested” has used this type of device and not a true load tester. So we’re not going to get a better result there.

We just learned about a third way that’s much easier: a Solar Battery Tester. “Solar” is just the name of the tester, it does not run on solar power nor does it require batteries to be hooked up to solar power.

I can only say that it’s a huge step forward in keeping tabs on your boat’s batteries (as my mom would say, it’s just “slicker than snot”).

IMPORTANT NOTE: This tester can only be used with 12-volt batteries and if you have a cold cranking amp (CCA) spec for your batteries. All starting and most deep cycle batteries will have this printed on them or you can find it on the manufacturer’s web site. Golf cart batteries — even 12 volt ones — generally don’t have a CCA specification. If you use 6-volt golf cart batteries, this tester definitely won’t work.

Admittedly, we don’t normally use the CCA spec with house batteries (it’s a measure of how much starting power there is in a battery). But by comparing the current CCA of a given battery to its CCA when new, it’s possible to see how much life is left in the battery.

We recently wondered if our batteries were starting to go — the overnight voltage drop was increasing, and the starter seemed to not be turning over as quickly as it had (our boat has one battery bank as the engine is small and does not need a dedicated starting battery).

We’d become friends with Alex Miller of Sea Tek (he does all sorts of electric, electronic and solar panel installation and repair, along with outboard motor repair), he said that he had a battery test that gave just as good results as a load tester — and it was the size of a voltmeter! It was the Solar BA-5 and he offered to let us borrow it.

You do have to disconnect the batteries from one another and from any charging sources such as solar or wind (if the engine and/or generator aren’t running, no need to disconnect and any batteries that can be isolated by a switch don’t have to be disconnected — only those that are connected within a single bank). The batteries can be in pretty much any state of charge (full, partial or even “down”). But you don’t have to let the batteries sit, get into the acid, or take them anywhere.

You connect the clamps on the tester to the positive and negative terminals on the battery, and it turns on using the battery’s power. You set the type of battery and tell it the CCA that it had when new (that is, what’s printed on the battery). All the codes are on the back of the tester.

It runs a quick test (I don’t completely understand the technology) and then tell you how many CCAs the battery currently has. If that number is less than half the original number, it will then say the battery is bad. One thing that I like is that since it tells you the CCA in addition to the good/bad determination, you can see if a “good” battery is starting to lose its capacity instead of just being surprised one day.

We tested all three of our batteries. The first two tested very good — CCAs were almost identical to the original specs. The third battery, however, didn’t do so well. The charger asked us to say whether the battery was fully charged or not. We said yes and it immediately showed it as bad (in other words, if the battery hadn’t been charged, it might have been okay once it was, but since it was charged . . .). A quick answer: yes, we had a bad battery and needed to replace it.

I didn’t think to take photos as we tested, but here’s a video of how it works:

We’re planning to get one of these testers for ourselves. While it’s not something that we’ll use every day, it will be a huge help when we do think we have a battery problem as it is so much easier to test them. I also envision testing our batteries at the beginning of the season and I think it’d be great for boats about to head to remote locations to test while they still have access to stores. It took less than 10 minutes to test ours, including the necessary disconnecting.

Solar makes several battery testers, depending on how sophisticated you want to get. The BA5 is the base model for testing 12-volt batteries and runs $50 to $60 online. The BA7 also tests the charging circuit and alternator, but all it’s really doing is checking the voltage there, which you can do easily with a voltmeter. Since we have a nice voltmeter, I wouldn’t spend the extra $20 or so to get the BA7.

Harbor Freight has a similar battery tester, but it costs about 50% more. I’m sure that there are others, too, but I haven’t found them in a quick search online.

When I looked, Amazon had the best price on the tester:

882 Shares
Some links in this article (including all Amazon links) are affiliate links, meaning that we earn from qualifying purchases.