You are here: Home / Buying a Boat & Gear / Taleisin’s Tales 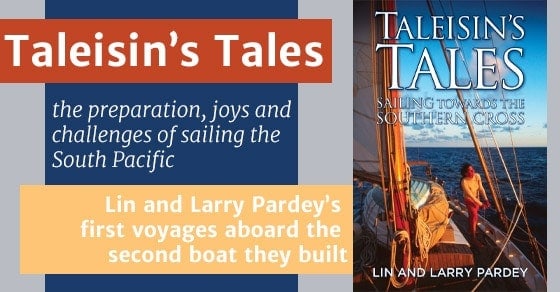 Yay! Lin Pardey has a new book out – her first in five years! And it’s the one that her fans have been urging her to write for years – their first cruising aboard Taleisin (the second boat that they built themselves), from California to the Baja peninsula of Mexico and then across the Pacific and down to New Zealand.

Taleisin’s Tales is a great story – full of great times on a route that many of us dream of sailing. It’s easy to read just as a look at a wonderful trip with two accomplished sailors who had previously circumnavigated.

But in the details are all the preparation that make such a trip possible: the months of shakedown trips, the navigational challenges, the things that can go wrong even with years of experience and tens of thousands of sea miles.

I loved the glimpse into how they faced these challenges, and that’s one thing that I’ve always enjoyed about Lin’s writing. She doesn’t gloss over the problems or ignore what they did to fix it. Instead, she tells what they did and/or how they figured out what the problem was.

Those nuggets both show how to approach problems and also tell me that we’re not the only ones who have “sudden learning episodes” on the water. And if they, after a circumnavigation, felt that an extensive shakedown off the California coast was imperative before setting out on longer cruising, it says that maybe we’ve been right to not just jump on our second boat and head out for long distances.

In addition to the tips that are woven into her story, Lin included a wonderful appendix on coral reef cruising – the challenges of the South Pacific “Milk Run” even with GPS, and tips and tricks for safely navigating the shoal waters.

Lin will have a few print copies of Taleisin’s Tales with her this weekend at the Port Townsend Wooden Boat Festival and also at the Annapolis Sailboat Show, even though it isn’t “officially” released until October. You can also preorder/order copies at:

Disclosure: Lin is a personal friend and she gave me an advance copy to read. Of course, I might be biased in my opinion. But long before I ever met her, two of her books were instrumental in first giving us cruising dreams (Cruising in Seraffyn) and second, convincing us that we could do so safely (Storm Tactics).

129 Shares
Some links above (including all Amazon links) are affiliate links, meaning that I earn from qualifying purchases. Learn more.