You are here: Home / Buying a Boat & Gear / Sunscreen That Doesn’t Kill the Coral 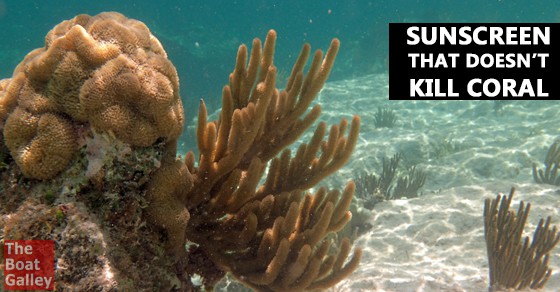 In the past few months, it’s been widely publicized that ingredients in conventional sunscreens kill coral. These studies started appearing a few years ago; even a few drops of sunscreen can kill a relatively large area it seems. And a couple of studies have shown that oxybenzone, a chemical that’s in most sunscreens and harmful to reefs, also feminizes some fish.

YIKES! As boaters, we’ve been taught for years to wear sunscreen to avoid skin cancer. But as an avid snorkeler and diver, I don’t want to do anything that even might damage the reefs or fish population. Admittedly, there are other contributing factors to coral damage, but this is something that’s easy for me to avoid. (NOTE: if you use any makeup or moisturizer “with sunscreen,” make sure it doesn’t have any of the bad chemicals listed below!)

Dave and I really don’t like to put a lot of “goop” on our skin and also don’t want to put any more chemicals into the water than we have to – even ones that are currently believed to be “reef-friendly.” So our first line of defense against the sun is a snorkel suit (aka dive Lycra). We’ve worn one ever since other cruisers recommended it to us back in 2003, our first year of cruising.

And a Lycra suit doesn’t only provide sun protection – it also protects you against jellyfish, which seem to congregate in many of the best snorkeling spots. I’m not going to claim that a Lycra will protect you from a really nasty sting, such as a Portuguese Man-of-War. But it’s great against many of the smaller ones, such as the “aguamales” that were prevalent in the Sea of Cortez.

A Lycra suit is not figure-flattering at all, I’ll admit. The good news is that you don’t have to buy one that’s skin tight. In fact, it’ll last a lot longer if it’s slightly loose and not pulling tight.

A few other notes about what we look for:

NOTE: Sizing on dive Lycras isn’t the same as on other clothing. You’ll probably take at least one, sometimes two, sizes larger than in regular clothing. When in doubt, go for the larger size; it’s better to be a little loose than super tight. If ordering online, check the size charts and take your own measurements – don’t just go on “I think my measurements are . . .” If your measurements, weight and height put you in more than one size range or you’re right on a borderline, I’d opt for the larger size – a suit that’s a little looser won’t hurt you but one that’s too tight will be uncomfortable and have a tendency to rip.

We both like the fit and features of the Neosport dive skins with the bright yellow trim. As I’m writing this LeisurePro is selling them for $27 (over 40% off) – don’t know how long the sale will last (with 60 days to return for full credit if it doesn’t fit and 120 days to return for store credit).

They are also available from Amazon – click here to see.

For smaller-sized kids, there are several good options on Amazon (friends with kids/grandkids have told me they look for the same things in kids’ Lycras and particularly like the sun protection offered by one-piece suits although they’re a little tougher to remove for bathroom breaks):

When I first heard about the sunscreen problem (prior to a trip we made to Hawaii in 2013), I started researching alternatives. A number of companies have come out with “reef-friendly” sunscreen but, like everything else, they’re not all created equal.

First point: use of the term “reef safe” is unregulated. Check the list of ingredients yourself to make sure it doesn’t contain oxybenzone, butylparaben, octinoxate or 4-methylbenzylidene camphor.

Five other differences between brands:

The one place where they are pretty much “equal” is in price: reef friendly sunscreens are much more expensive than what you’ve probably been using – especially if you’re like me and always bought the huge bottles of No-Ad. I’m willing to pay the difference, but yes, it’s an additional reason that I wear a dive skin: I don’t have to use nearly as much sunscreen when I snorkel. It saves some money (my sale-priced dive skin cost only a little more than one tube of reef-friendly sunscreen).

Dave and I are now using Rubber Ducky sunscreen as it does a great job on all the counts above. I checked ingredients on many other brands and read reviews. I tried a few free samples that I got at the boat show, but this is the only one that I bought a whole tube of. We’ve been really happy with it although it’d be nice if it were less expensive.

We use the  SPF 30 version – it’s white but rubs in well so that it’s not noticeable even on well-tanned skin; I don’t know if it would show on darker-skinned people. Rubber Ducky also has an SPF 50 version with a tint as the higher SPF just doesn’t rub in as well and it would look white on your skin were it not tinted (we have not tried this one, friends like it but say the tint can rub off a bit on clothing).

Rubber Ducky stays on in the water even better than conventional sunscreens, yet washes off fairly easily at the end of the day with just soap and water on a washcloth – a washcloth is necessary to have a bit of texture to “scrub” (I love the Scrubr washcloths – see on Amazon). It’s easy to apply, being very slightly greasy but better than any of the other reef-friendly sunscreens I tried, and it doesn’t tend to rub off as long as I rubbed it in well.

Best of all, it doesn’t have any weird chemicals. Zinc oxide is the active ingredient. Both the SPF 30 and 50 varieties are listed as hypoallergenic and safe for kids.

For snorkeling, I use the sunscreen on the back of my neck and ears only – I prefer not to use it on my face as my mask seals best against bare skin. I do use it on my face, arms and legs when we’re outside on sunny days however.

How long a tube will last you depends totally on how often you use it and how much of your body you use sunscreen on versus covering up (Dave and I tend to wear shirts and hats as our primary sun protection).

UPDATE: We’ve recently used some of the Thinksport sunscreen as it’s a little cheaper, has no nasty chemicals and seems to protect us just as well.