You are here: Home / Buying a Boat & Gear / Project Boat for a First Boat 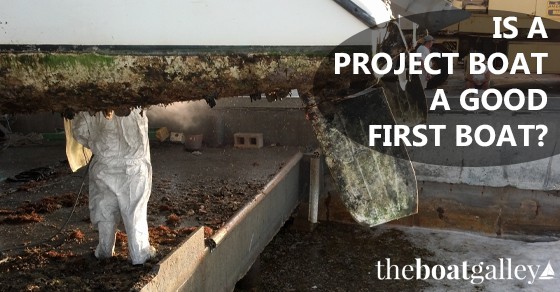 If you’re buying your first boat, you may have thought about getting a project boat and fixing it up to be just exactly what you want. I mean, how hard can it be? And by doing the work yourself, won’t you save money? And project boats are soooo cheap!

Okay, so what’s a project boat? It’s the nautical equivalent of a fixer-upper or handyman’s special. Basically, a boat that really can’t be used as is. Typically they’re being sold very cheaply — or even given away — just so the current owner no longer has to pay storage or look at it. There’s a certain appeal in buying an old boat and fixing it up . . . and books such as This Old Boat by Don Casey make the process look easy.

I hate to burst your bubble, but I strongly recommend that you do not buy a project boat for your first boat. Even if it’s given to you, it’s not likely to be a good deal.

Instead, get a boat that you can use right now — it doesn’t have to be perfect, but usable — and use it. See what you like and don’t like and how you use a boat.

Project boats need to be undertaken as a labor of love with the understanding that you will never get back what you put into one.

I’m not saying that you should never buy a project boat, but they are not good first boats. You really need to know what you’re getting into — and having already owned a boat, maintained, repaired and upgraded her will give you a far better sense of what’s involved.

371 Shares
Some links above (including all Amazon links) are affiliate links, meaning that I earn from qualifying purchases. Learn more.