You are here: Home / Buying a Boat & Gear / PowerMax: Customer Service Above and Beyond 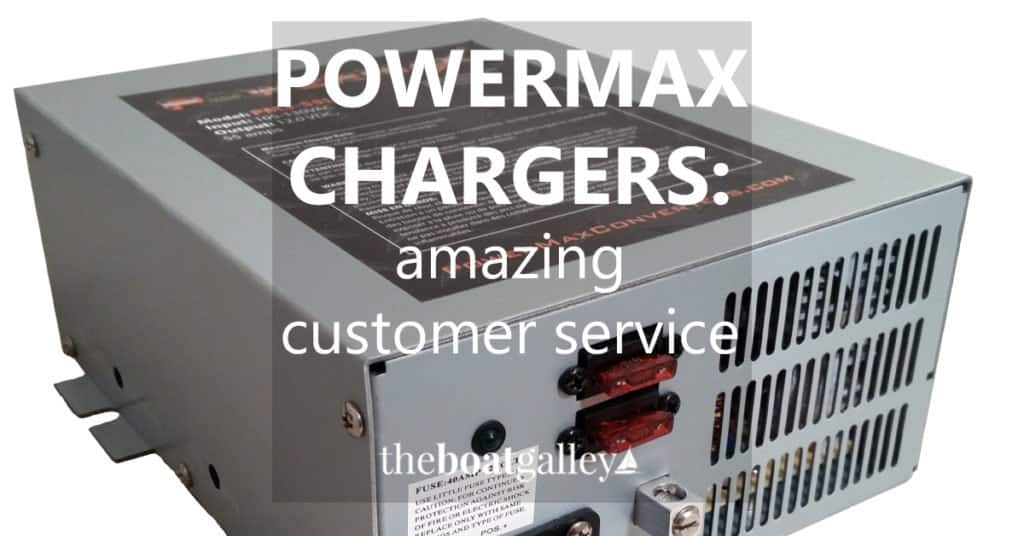 We use a PowerMax shore charger on Barefoot Gal. I originally chose it as having a good reputation for quality with a very affordable price. I’m now here to say that their customer service is nothing short of amazing.

This past week, we were charging the batteries from the generator through the PowerMax charger when it stopped working out of the blue. I followed the steps in their troubleshooting guide . . . there was power at the outlet it was plugged into but oops, the little green light to indicate that it was working wasn’t on. The manual said that it was probably dead.

So I called PowerMax. The company website shows a general number and then individual number for Errin, Graham and Frank (I presume the three owners.) I got hold of Frank.

Since we were using the charger with lithium batteries, I wondered if our habit of resetting it to keep charging at full amps (because lithium’s can take it) had killed the charger. No, that should be fine, Frank told me.

Then he asked when I’d purchased the charger. A little over 15 months ago. “Great!” I was told. “It’s still under warranty. Send it in and we’ll send you a new one.”

Wow. No trying to convince them it was covered under warranty. A refreshing change.

But the good things just continued.

When we had purchased that charger, we opted for 75 amps as being the largest that would be compatible with our 355 amp-hours of lead-acid batteries. But we had switched over to lithium batteries a few months ago, and the new batteries would accept up to 150 amps. Admittedly, our Honda 2000 generator wouldn’t put out enough power for 150 amps continuously, but it could put out 120 amps at up to 15 volts. And PowerMax has a 120-amp charger that’s exactly the same size as the 75-amp charger.

You see where this is going. I took a deep breath and asked if the charger had to be replaced, could we get the 120-amp charger and pay the difference? Of course, Frank said.

I was astounded. Many companies will only do an exact exchange under warranty. How refreshing to run across a company that realizes your needs may have changed since you originally bought their product, and understands that by giving you exactly what you want, they’re going to have a delighted customer.

But, as the infomercials, say, “Wait, there’s more!”

I sent the charger back and got a text very shortly after it was delivered to them. Frank had plugged it in and it was working just fine. He asked if I’d checked the power at the outlet with something else. Yes, a hairdryer and also our Shop-Vac (I was very glad I’d done this!). Well, he didn’t have an explanation for what had happened but wanted to keep the charger and run some more tests on it.

Uh-oh, I’m thinking. What if there’s not enough sun to keep our batteries charged? Our engine is down right now, so we can’t run the engine to charge with the alternator. I didn’t even get to say anything about that before he did one of the most amazing bits of customer service I’ve ever received. (As far as I know, Frank didn’t know of TBG and he certainly didn’t ask me to tell anyone of their products or customer service — this is just how they treat all customers.)

Frank said that he knew we lived on a boat and probably needed the charger back as soon as possible. So he was going to go ahead and send us the 120-amp charger that day for just the difference in price plus shipping.

They have an absolutely delighted customer that is going to highly recommend them.

Basically, PowerMax chargers are simple models, with 3-stage charging (no equalize). We use what they call a “converter” (AC to DC) which also has a charger. What they list as a charger has a few extra bells and whistles to make it more portable for use by electricians. When I asked Frank about the difference, he said that they were exactly the same inside and for our purpose, the less expensive “converter” was the recommended model.

You can set the bulk charge voltage on the converter, but it’s with a little screw and you have to check the voltage with a voltmeter, there’s no digital readout (there is a digital readout on the “charger” — that’s the main difference). Neither one is a “marine” model and if you want an inverter you’ll have to install one separately. However, a number of marine electricians (including our friend Alex at SeaTek Marine here in Marathon, now closed) highly recommends them as being a very solid charger at a great price. They’re much better known in RV circles, but work well for cruising boats, too.

You can buy PowerMax converters and chargers directly from the company and from Amazon.

138 Shares
Some links in this article (including all Amazon links) are affiliate links, meaning that we earn from qualifying purchases.