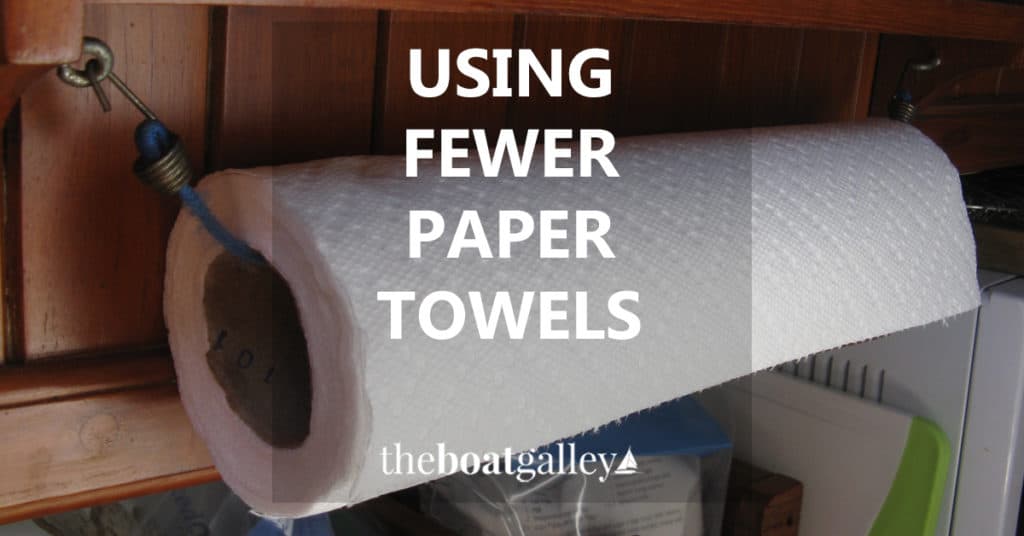 Paper towels can take up a lot of space on a cruising boat.  And once out of the US, it can be hard to find “good” ones and they can be expensive.  And then there’s the environmental aspect, as well as just producing more trash to deal with when you’re cruising.  We learned several ways to use far fewer paper towels — although we never got it totally down to zero.

In the Kitchen, Use Bar Rags

Bar rags are a little smaller than a dish towel and are made of 100% cotton to be very absorbent.  I got a pack of 24, so that I could use fresh ones frequently.  I’d use them for wiping up all the little stuff in the galley as well as things like mopping the water out of the refrigerator when I defrosted it.

Bar rags are almost always just plain white, maybe with a little stripe.  Don’t pay extra for microfiber or “pretty” towels for everyday use — they’ll get stained and you’ll want to be able to use bleach on them.  After about a year, I’d buy another set and my old ones would become engine rags.  Uh, yeah, it’s about time for new ones as you can see in the top photo.

NOTE: I did buy one set of microfiber wash cloths and don’t like them nearly as much as the 100% cotton ones. They just don’t absorb as well. I don’t recommend them.

You can usually buy bar rags or large packages of “kitchen cloths” in the housewares department of big box stores like Target, Wal-Mart and K-Mart.  The big thing is to make sure that they are 100% cotton — ones with part polyester are not nearly as absorbent. These are the ones I have — available on Amazon:

Outside the US, I never did find anything similar — I could find wash cloths, but most had polyester in them and weren’t nearly as absorbent.  Then I figured out a great substitute:  cloth baby diapers and burp rags.  They’re both very absorbent, designed to be washed and bleached over and over, and I could find them everywhere.

For the Engine and Workshop, Use Old T-Shirts and Towels

Initially, Dave bought a bag of “shop towels” for all the gunky stuff.  The first time he used them he discovered that there was a reason they’d been so cheap:  they had a high polyester content and didn’t do much for getting grease and oil off his hands . . . or anything else, for that matter.

About the same time, we discovered that the combination of  living in the tropics and laundry women using lots of bleach to make our clothes appear very clean resulted in t-shirts with holes.  Since they were all 100% cotton, they were quickly torn up and used as shop rags.

When bar towels or shower towels were past their prime, they also were made into work rags.  Most could be washed and re-used numerous times before they got tossed.

When You Have to Use a Paper Towel, Use Only Half

While we used far fewer paper towels, there were still times when we wanted one instead of a cloth rag.

In the US, we had usually bought the ones with the “half-sheet” perforations so we didn’t have to always use a full sheet.  We never found these outside the US.

At first, I tried tearing half a sheet off the roll, parallel to the perforations.  That didn’t work as the sheet would end up tearing lengthwise sort of diagonally.

One day I had an AHA! moment:  if the sheets want to tear lengthwise, let them. Make a small tear to start in the center of the roll, hold down one side and tear the other side off.  Voilà — a perfect half sheet!

708 Shares
Some links above (including all Amazon links) are affiliate links, meaning that I earn from qualifying purchases. Learn more.