You are here: Home / Buying a Boat & Gear / Can Opener 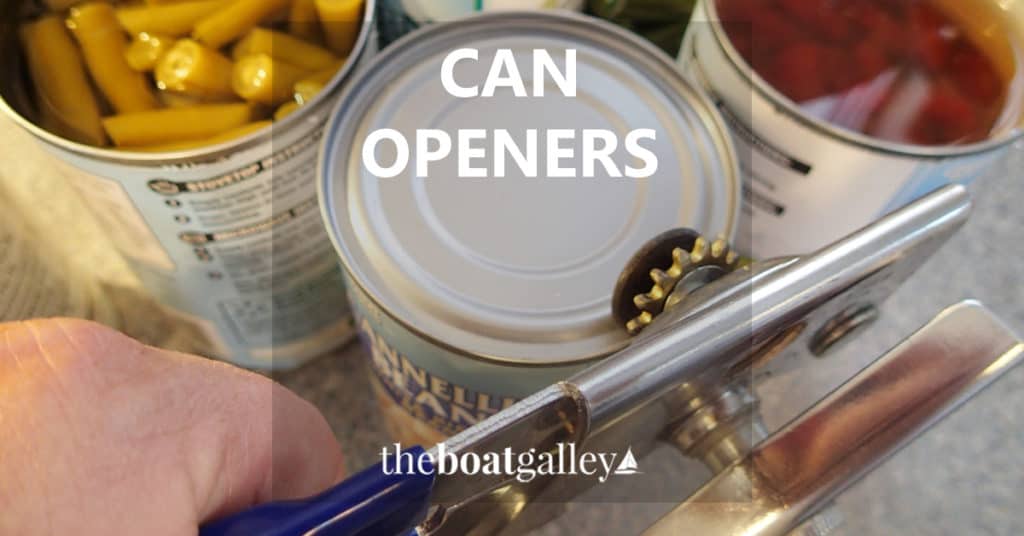 On a boat, a can opener is one of those things that just needs to work.  Most cruisers use more canned goods, particularly when away from towns, due to limited refrigerator space.  And if you’re hungry, your food is in a can, your can opener’s broken and town is a day or two away . . . well, it won’t be a pretty picture.

Don’t get a look-alike or the “Junior Swing-A-Way” (smaller size).  They just don’t work as well, as you really don’t save much money, as the original Swing-A-Way is generally less than $10.  It comes in a variety of colors, too.

The salt air environment can be hard on can openers, and I’ve seen a number of cruisers recommending expensive all-stainless models that cut the lip and all off the can.  I don’t doubt that those openers do a good job — but I really don’t think they’re any better for the extra money.  I know, usually I think that all-stainless products are the way to go.  But the Swing-A-Way has worked well for me.

After 5 years aboard Que Tal, and now two years off the boat, here’s a photo of the cutting blade of my Swing-A-Way.  There’s some rust on the steel, but it doesn’t cause any problem in using it.  I literally just used it to open a can of tuna for lunch, and it worked just as easily as the day I bought it.  The handles are comfortable and easy to squeeze together, and the turning knob is easy to grip and turns easily.  It cuts all around without missed spots.  (UPDATE:  After 9 years with it, I finally had to replace this can opener due to someone using it as a hammer (!) — and I got another Swing-A-Way as shown in the top photo.)

A couple of years ago, we took a two-month camping trip through National Parks and I bought a look-alike can opener to go in our camping gear — it was what the store had and I’d sort of forgotten my experience when we’d first moved aboard Que Tal.  The first time I used it, I realized I’d made a mistake.

When we next went to a supermarket, I saw the Junior Swing-A-Way and figured that it would be just like the one at home, but smaller.  I soon learned that being smaller meant that it didn’t have as much leverage to close the handles and initially pierce the can, and the cutting blade was smaller and didn’t work as smoothly.  You guessed it — I finally bought the original Swing-A-Way and became, literally, a “happy camper”!

You can get these at most grocery stores, and on Amazon too:

88 Shares
Some links above (including all Amazon links) are affiliate links, meaning that I earn from qualifying purchases. Learn more.