You are here: Home / Living on a Boat / Nail Care Tools 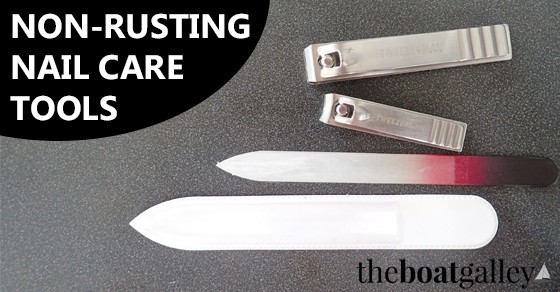 Sounds funny, I know. But one of our most frustrating “tools” on the boat has been nail clippers and emery boards.

We have had clippers rust at an alarming rate, going through at least one pair and generally two a year. It’s bad enough when rust is on the handle, but when the cutting blades rust, the clippers are pretty much useless. We’ve tried keeping them wrapped in an oily rag, in a plastic bag, with desiccant and numerous other things. Dave has tried sharpening them to keep the blade part rust-free. Nothing has really worked.

Emery boards quickly succumb to humid air with several problems: they get soft and turn black with mold. Admittedly, it’s not expensive to buy a 6-pack, but frustrating to need one and not have a decent one. Plus, I hate waste.

A little over a year ago I decided to see if there were better products out there . . . without spending a fortune.

Guess what? There are. Stainless finger- and toenail clippers. A glass (of all things) nail file that is holding up beautifully (I am careful not to drop it and to wedge it between other items for storage so it won’t get broken underway, but no chips or breaking so far). We’ve used them over a year, full-time, on the boat. And they’re working much, much better than anything else we’ve tried in 10+ years of living aboard.

So I had to share . . . Available on Amazon at reasonable prices — far less than I’ve spent on multiples that I had to throw out:

For the record — no, I don’t have manicured nails on the boat. But that doesn’t mean I don’t need nail care tools!

153 Shares
Some links above (including all Amazon links) are affiliate links, meaning that I earn from qualifying purchases. Learn more.