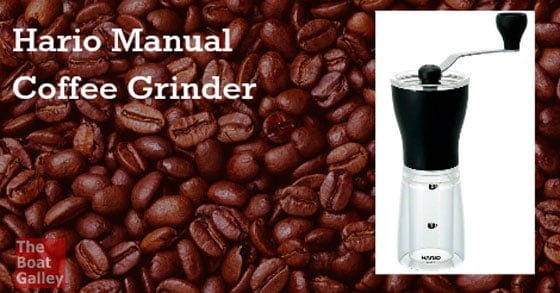 Since I originally wrote about the Kyocera Manual Grinder, two other readers have written me about their manual coffee grinders.  I don’t own either of these and haven’t used them, so I am going by what they told me as well as reviews published on Amazon.

While I think the Kyocera (see it on Amazon) is better for many people, these are good options for those who need something smaller or have a very tight budget.

The Hario comes recommended by Kelley of Sailing Chance — she writes that she “LOVES IT.”  It also gets generally good reviews on Amazon.  It’s smaller than the Kyocera and you can remove the crank for storage, so it’s good in that respect.  But that also means that you can only grind enough for 2 cups of coffee at one time — or just one if you’re like me and tend to use more coffee than average or have a large mug.

It’s also about $20 cheaper than the Kyocera . . . also a plus.  The downside is that it takes a little more effort to grind the coffee — reviewers say it takes about 2 minutes to get 2 cups’ worth of ground coffee (finer grind takes longer than coarse).  It also only has directions in Japanese — apparently, however, the only thing to know that’s not immediately apparent is that there is a nut on the bottom to adjust the coarseness of the grind.  UPDATE:  Kelley posted in the comments that the one she got does have instructions in English, so apparently Hario realized that it would be helpful if they were selling in the US.

The Hario is a ceramic grinder, which works much better than a blade grinder for coffee — particularly when powered by hand — and won’t rust (the only metal in it is stainless).

See the Hario on Amazon

This comes recommended by Charlotte, who left a comment on the article about the Aeropress Coffee Maker.  She says it works consistently well, has an adjustable grind, takes up little space — and provides a good workout, too!   However, I’m a little leery of giving it a whole-hearted recommendation.

While Charlotte loves it, the grinder gets generally mediocre-to-poor reviews on Amazon and other sites, primarily because of the fact that it is just the grinder, with no container for the ground coffee attached.  Therefore, you have to hold it and whatever container you are using together, with enough force so that you can crank hard enough to grind the coffee beans (a couple of reviewers note that the ceramic grinding surfaces simply are dull, thereby requiring more force than other manual grinders).  Numerous people complain of it being awkward, difficult or even impossible!

The plus is that it’s the smallest grinder I’ve seen.  My feeling is that if you’re wanting a manual backup for an electric coffee grinder in case you’re low on power, it’d be fine — very small size and not too pricey.  But for everyday use, I’d opt for something that’s easier to use.

219 Shares
Some links above (including all Amazon links) are affiliate links, meaning that I earn from qualifying purchases. Learn more.