You are here: Home / Buying a Boat & Gear / Mantus Anchors 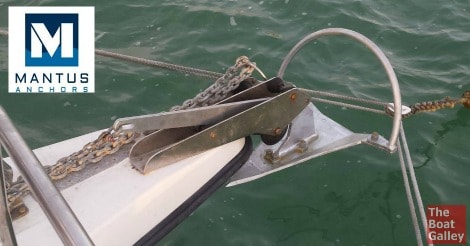 Barefoot Gal has a wonderful 35-pound Mantus Anchor and chain hook — I wrote this when we first bought it, as to why we chose Mantus. It has performed flawlessly since then — read the last update at the bottom!

Barefoot Gal came with a 33-pound Bruce anchor as the primary and a 25-pound Danforth as the backup anchor. Dave and I aren’t big fans of Danforth anchors as they don’t reset well if the wind or current (tide) changes. We knew that we wanted to replace it.

Our plan was that the Bruce would become our backup anchor and we’d get a new primary. We’d originally had a Bruce on our previous boat, Que Tal. And we rode out a Category 1 hurricane on it in a good hurricane hole. So we were comfortable with it being our second anchor.

Still, after going through Hurricane Marty in 2003 we had upgraded to a new generation Spade anchor. At the time we bought it, the Spade was one of the newest anchor designs on the market, and it served us well for over 5 years. Frankly, we loved that anchor and it kept us safe twice when nearby boats ended up on the rocks in unexpected winds. Read more about our experiences with the Spade.

So why not go with another Spade if we’d liked it so much? How to put this . . . we have nothing against Spade, but anchors have continued to evolve in the twelve years since we bought the one for Que Tal.

We’d seen Mantus Anchors at boat shows and met the company founders, Greg and Deneen. Greg’s an ER physician and Deneen a senior engineer at NASA. The number one thing that impressed both Dave and me was how the weight of the Mantus was concentrated in the tip, even compared to other new generation anchors. Admittedly, neither of us are engineers, but we both feel that tip weight (and a really sharp pointed tip) are major components of an anchor setting . . . and resetting.

Most importantly, we talked in person, via email and via Facebook to numerous Mantus owners. Not one had a bad thing to say about using the anchor or stories of it letting them down.

Anchor choice is somewhat subjective, and experiences can vary with the conditions that people typically anchor in as well as their anchoring technique. We know that it’s not just the anchor that’s important, but the snubbers, cleats and attachment points as well — it’s a system. We don’t know all the details of these people’s systems, but the fact that none of the owners had anything bad to say about the Mantus meant a lot to us.

Buying a newer design anchor has pros and cons. On the plus side, you hope that the fact that it’s new means that it’s at the top of the design curve. The minus is that there aren’t tons of independent tests. It’s a bit of a leap of faith, where you have to rely on your own analysis and feedback from other even earlier adopters. In 2003, our analysis led us to buy the Spade (at $1200 in Mexico for a 66 pounder, not a small decision) and it worked well for us. Now, we’re betting on a Mantus 35.

Finally, the list price of the Mantus is just a hair over half of what a similar size Spade costs today in the US. Full disclosure: Mantus is a TBG sponsor and we did get a discount on the anchor purchase and I do make a tiny bit on sales made through the links here. However, since our anchor is our boat’s number one safety item, price alone is not the determining factor in our decision nor is friendship with the company’s founders. We got a Mantus because we think it’s the best all-around anchor for us. I recommend it for that reason, too.

UPDATE: A year later, we love the Mantus. We’ve been in some areas with 3+ knot current and it has set immediately and held rock steady. We also use the Mantus chain hook on our bridle and it is wonderful!

SECOND UPDATE (January 2017): If possible, we love our Mantus more than ever. Last summer, we were in five squalls in the Bahamas with winds over 40 knots. We held with zero dragging when multiple boats around us were dragging (in one case, we were the only one of four boats in the anchorage that didn’t drag). More impressively, a very unexpected squall came through our next to the last night in the Bahamas, putting us on a lee shore in 35 knots of wind coming from a direction with 50 miles of fetch (totally the opposite of the prevailing winds). Just to make it a tad more “interesting,” our engine was being temperamental and we knew we couldn’t count on it to motor to a better spot. Barefoot Gal didn’t budge.

1.5K Shares
Some links above (including all Amazon links) are affiliate links, meaning that I earn from qualifying purchases. Learn more.