You are here: Home / Living on a Boat / Krud Kutter – Great Degreaser for Your Boat 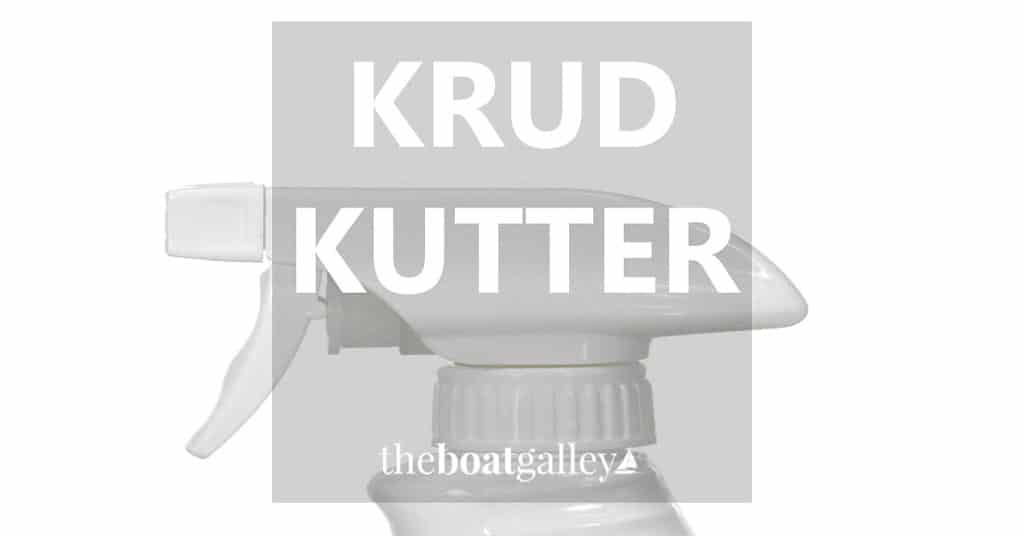 Nearly a year and a half ago, reader Tammy Swart (see her blog about becoming a cruiser) told me about a great degreaser called Krud Kutter.  It was in the comments on an article I had posted about cleaning that gunky area between the side of the stove and the cupboard.

Some time ago, I bought a bottle of Krud Kutter to try and forgot to write a follow up on how I liked it. Oops!

The answer is simple:  I LOVE IT!!

One note of importance on a boat:  the directions specifically say not to use it on varnish (or on leather).

It comes in several different sizes but the quart spray bottle seems the most convenient.  That’s what I have.  And while the directions say you can dilute it for all but the toughest jobs, I take the easy way out and just spray it on full strength.  For textured materials, I use a small scrub brush (a nail brush or, for really tight areas, a tooth brush) to get in down into the crevices where grease likes to hide, then wipe it off with a rag.

I’ve used “Awesome” for the last 10 years or so, but I have to admit that I have a new favorite.  Awesome is great and I still recommend it if you can’t get KK, but Krud Kutter is even better.  It got a few places clean that the Awesome hadn’t (and nothing else had, either).

I haven’t had a need to try it on any exotic stains yet, but it says it will clean grease and oil, tar, crayon, and even mildew stains.  Even better, it should not stain or remove color from surfaces (always test first in a hidden spot!).

Tammy said that she’d gotten it at an Ace Hardware, but the one near me didn’t carry it nor did anywhere else in town that I looked.  So it was off to Amazon:

525 Shares
Some links in this article (including all Amazon links) are affiliate links, meaning that we earn from qualifying purchases.