You are here: Home / Common Problems & Concerns / That Time I Wanted Off the Boat 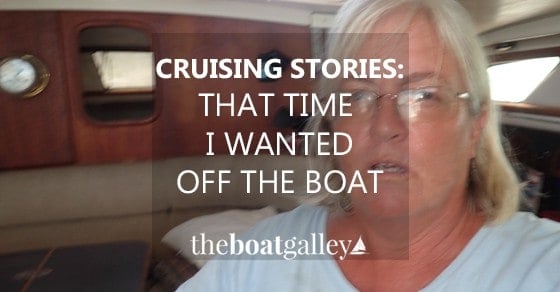 This was me last week.

I’m hot. Beyond overheated. Exhausted. Sick. We just had to repair the watermaker, and then we discovered that there is a defective fitting on our spare tank of propane so it’s useless . . . and we’re virtually out of propane in our primary tank. As I put the boat into gear to pull the anchor so we can get a refill, the engine overheat alarm shrieks. Egads, now what?

Dave’s as tired and hot as I am and we’re not exactly polite to each other as he asks me why the hell I shut the engine down as he was raising the anchor, and I inform him of the alarm that he somehow failed to hear.

Right then, all I really wanted was off the boat and into a motel with air conditioning. Were we nuts to be out cruising? Too old? Wrong to go to the Bahamas in summer?

When I told a cruising friend about that day, she encouraged me to write about it. “You and I know those days happen to everyone. There are times when we all hate cruising and long for the comforts of shore life. New cruisers need to know that they’re normal to have those feelings . . . and how you deal with those times.”

Okay. Here’s the story of how things were going badly and how we got back on track . . .

The last couple weeks have been hot here in the Bahamas — hot and extremely humid. Dave and I are pretty heat tolerant, cruising six summers in the Sea of Cortez and doing numerous summer tent camping trips when temps have been over 100° F. But those times, we were always able to swim multiple times a day. Now, Dave had a mildly infected cut on his leg from a branch across a trail he’d been hiking on, and was staying out of the water while it healed. I didn’t want to jump in when he couldn’t.

Sweat poured off both of us and t-shirts soaked through within 15 minutes of putting them on. We were drinking water faster than the refrigerator could cool it down.

A week before, I’d come down with a nasty cold that had me feeling crappy in general and kept me up coughing at night. My symptoms didn’t warrant a trip to a clinic, but I wasn’t improving either.

Add in the heat and an anchorage with significant swell from various directions over the course of a day (so a stern anchor or swell bridle didn’t really help when things changed at 3 AM), and I wasn’t getting much sleep. I’m sure that the lack of sleep was a big part on why I wasn’t getting over the cold, as well as contributing to my overall rotten feeling.

There were some back of the mind things. It’s hurricane season. We’d heard from two friends with serious health problems. We still hadn’t decided what we wanted to do in the next two months in the Bahamas.

We’d had to do various unexpected repairs. And then discovered the propane problem.

Individually small things, but it felt like everything was going wrong and I was in no shape to cope.

Luckily, I have a pretty perceptive husband. Two minutes after I shut the engine down for overheating, he knew the cause was nothing serious: a broken alternator belt. More importantly, he recognized that I was at my limit. He was close himself, but not quite there. He was still functioning. Before starting on even the first bit of repair, he sat me down and gave me the coldest drink we had. And then we talked.

No, I didn’t really hate cruising.

The biggest thing I needed was sleep, both to kick the cold and to feel better in general. To sleep better, I needed to be cooler and I needed a less rolly anchorage.

After replacing the alternator belt, we moved about 12 miles to a much less rolly anchorage. I normally hate to take much in the way of OTC meds, but taking cold meds and cough syrup around the clock for a couple days let me sleep much better and feel better when I was awake.

Being virtually out of propane? While our initial reaction had been to head immediately to the one town nearby where we could get the tank refilled, we quickly came to the conclusion that propane was a much lower priority than getting me feeling better. Town would be a series of errands and the anchorage likely to have swell . . . plus just the general stress of being a much more crowded place than many other nearby anchorages.

We had enough propane for morning coffee (and could even boil water on the grill if need be) and plenty of “no cook” food we could have for meals (thank you to Liz who left a comment recently that you could prepare couscous by just letting it sit for 20 minutes, no cooking needed).

Staying in a calm, quiet anchorage for a few days was a much better choice. Pretty quickly, things weren’t so overwhelming. After the first day, in fact, I even felt up to doing a little hiking each day . . . followed by a swim and then a nap.

I feel much better — I’m still hot, but not to the point of overheating. I’m not exhausted. I’m pretty well over the cold. The watermaker and the alternator belt were both easy fixes. We got propane before we totally ran out. We’ve dealt with hurricane season as long as we’ve been cruising. We made a rough plan for the next two months.

A total reset on my attitude.

We’re right to be out here cruising. We’re not too old. Our friends’ health problems are a reminder to do what we can as long as we can. Summer is a great time in the Bahamas. It’s gorgeous, the water is crystal clear and the perfect temperature for swimming. I love my life!

805 Shares
Some links above (including all Amazon links) are affiliate links, meaning that I earn from qualifying purchases. Learn more.