You are here: Home / Buying a Boat & Gear / Flashlights That Work When You Need Them To

When we purchased Que Tal, the last line of the gear list said “collection of strategically located flashlights.”  We laughed about it at the time, but came to appreciate the sheer genius of the previous owners.  There were probably a dozen small flashlights mounted all over the boat!

Any time we wanted to peer into a locker — generally when I was looking to see what cans or packets I had squirreled away in some really inaccessible place — there was a flashlight readily at hand.

Unfortunately, many quickly succumbed to the realities of a marine environment.  Filaments broke in bulbs, parts corroded, and battery life was next to nil.  While it was wonderful to have flashlights everywhere, we decided that it would be far better to have working flashlights everywhere.  And so the search began . . .

Then we learned about “self-discharge rates.”  Batteries still go dead just sitting there.  Different types of batteries do so at different speeds, with lithium batteries having the least self-discharge of any type commonly available for flashlights.  But they’re expensive.

So our next step was to cut the number of “strategically located flashlights” to the ones we used the most often, and use lithium batteries in those.

Then a friend gave us an LED flashlight (this was when LED flashlights were just coming out).  WOW!  Talk about improved battery life with great light.  We were really impressed . . . until the switches died after just three months aboard.  But it was enough to convince us that LED was the way to go — we just needed better ones.

Well, another trip back to the US gave us the chance to try again on our flashlights.  We have several mini-Maglites that worked well except for the bulbs dying easily.  I found LED conversion kits for these on Amazon and they have been satisfactory.  Still have to put a battery in upside-down as they will still come on “by themselves.” 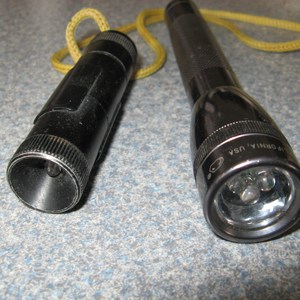 Where I really did well though, was in the Gerber LED little flashlights I bought.  They have just one LED and use just one AA battery, so we’re not talking flood lights — but perfect for looking into the dark corners of a locker or checking something on deck at night.  They had by far the best reviews of any of the lights I looked at, but I kept balking at the price (then $18; they’re actually a bit less now) for such a small light.  Finally, I broke down and bought two.  Love, love, love them!!

The link to them on Amazon:  Gerber Infinity Ultra Task LED Flashlight

We’ve had these now for over 8  years and I’m still thrilled with them.  While I initially wondered if they cost too much, I now can say that they’re the least expensive flashlights we’ve owned on a per-year basis.  I haven’t needed to buy additional bulbs and the flashlights themselves are still working fine with no sign of corrosion.  And the savings in batteries is considerable, too.

Just a side note:  On our family camping trip a few years ago, it seems that everyone else’s flashlights died the first night and Dave and I ended up walking several people home as we had the only lights that still worked.  Happened every evening after the campfire — and while all the kids and grandkids were buying more batteries all week, we never had to.  And at the end of the week, several took photos of our flashlights so they could buy them when they got home! 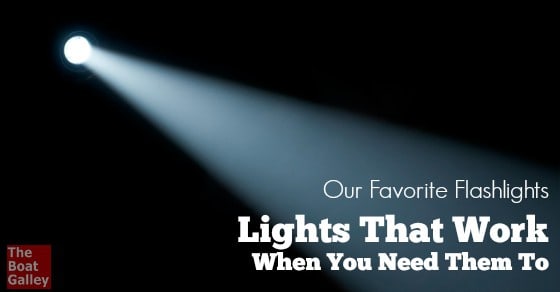 267 Shares
Some links above (including all Amazon links) are affiliate links, meaning that I earn from qualifying purchases. Learn more.

Finding a movie that keeps my attention is not easy. This one, featuring a sister ship to our own Calypso, definitely fits the bill! [More] Awesome Sailing Movie

The cruising life is uncertain. It always pays to have a backup plan. Here’s our story of how it paid off for us.   [More] Make a Backup Plan